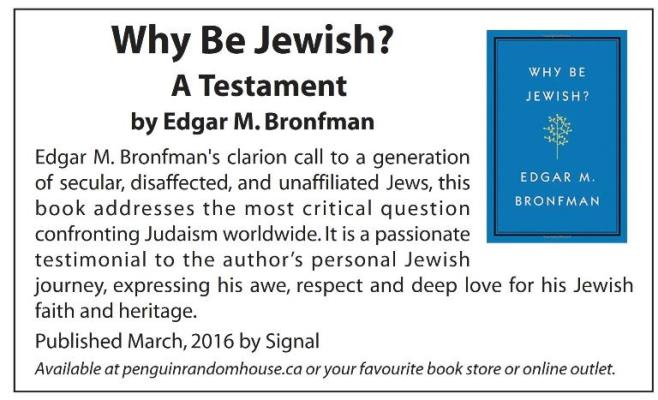 (EJNews) – Edgar M. Bronfman was the quintessential zaida at the age of 84 when he imparted his love for Judaism to the world. His journey and his beliefs are poignantly presented in his swan song, the recently published testament entitled “Why Be Jewish?”

Bronfman describes Judaism as an ethical way of life that is focused on love for family, love for community, love for nature, and kindness towards others steeped in beautiful and meaningful traditions and rituals.

Bronfman acknowledges that the belief in a supernatural deity is a fundamental part of Judaism but he asserts that it is just one aspect of Judaism and that it is not essential to the practice of Judaism.  He describes a secular form of the religion where questioning is revered and belief is not mandated – where deed is more important than creed.

Bronfman distinguishes himself as a secular Jew rather than an atheist, saying that in the face of the universe’s beauty and complexity he isn’t actually sure of anything. He is not prepared to discount the existence of G-d but nor is he a believer in an all knowing entity. With this as his premise, Bronfman reaches out to the disenfranchised, unaffiliated Jews who may also have doubts and are not comfortable praying to a deity and he unfolds for them a practice of Judaism that is loving and nurturing.

He says that “Judaism does not demand belief but rather asks us to practice intense behaviors whose purpose is to perfect ourselves and the world.”

Bronfman believes that the Judaism tent is large and inclusive and there is certainly room in it for secular Jews who are striving to follow the tenets of Judaism – repairing the outer world (tikkun olam) and repairing our inner world (tikkun middot).

Layer by layer, Bronfman describes his own journey of appreciation as it relates to the practice of Judaism. He discusses the many components of Jewish holiday celebration and the performance of rituals, offering possible adaptations to enhance the significance of the “doing” without dwelling on the “believing.”

Completed just weeks before his passing in 2013, Bronfman provides anecdotes from his lifetime of experiences to illustrate the beauty and meaning behind what he considers to be key components to the practice of Judaism. He draws from his personal life, from his relationships with family members and friends as well as his business life. He discusses the Torah and the Talmud and the mitzvoth (prescriptions for how to live) as well as hesed (kindness) and tzedakah (justice).

He presents several stories from the Bible thoughtfully in terms of the lessons they teach and the moral dilemmas they pose. He also describes some of the key biblical figures and the roles they play in the foundation of the religion.  He outlines the major Jewish holidays and milestones and lovingly discusses the rituals associated with each.

In “Why Be Jewish?” Bronfman presents an introductory primer on Judaism to anyone who wishes to learn more about the practice of Judaism.  It is a wonderful conversation with a wise man who has much wisdom to impart. There are many who would disagree with his basic premise that Judaism does not require a belief in G-d but no one could dispute the fact that Bronfman loved Judaism and spent his lifetime committed to living a good Jewish life.

Edgar M. Bronfman was the longtime CEO of Seagram Company Ltd. He also served for over twenty years as president of the World Jewish Congress and was the founding chairman of the board of governors of Hillel: The Foundation for Jewish Campus Life. Through the Samuel Bronfman Foundation he nurtured initiatives to cultivate Jewish learning, including the Bronfman Fellowships and MyJewishLearning, Inc. He received the Presidential Medal of Freedom in 1999. Edgar M. Bronfman passed away in December of 2013.

“Why Be Jewish” (ISBN 978-0-7710-1737-7) published by Signal in March 2016, is a book that can be enjoyed by anyone who is interested in learning more about the practice of Judaism.  Bronfman delivers his message in a grandfatherly way designed to stimulate the reader to live a better life. Although it is easy to read and easy to understand, the book should be savored and revisited. Its contents should be discussed around kitchen tables and coffee shops, by people of all ages and backgrounds.

Be the first to comment on "Book Review: Edgar M. Bronfman z’l explains ‘Why Be Jewish’ in a beautiful testament"