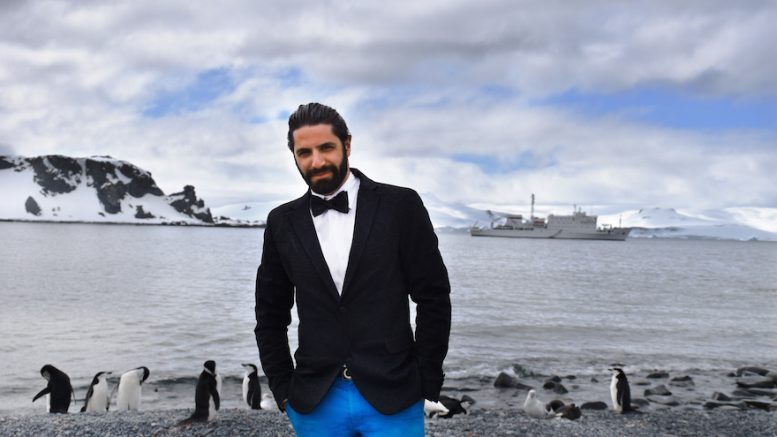 Author and behavioral scientist Jon Levy getting out of his comfort zone in Antarctica. (Courtesy of Levy)

(JTA) — To give you an idea of how uncool Jon Levy was as a kid, know this: His first kiss was in first grade, when he was a student at the Abraham Joshua Heschel School on Manhattan’s Upper West Side.

His second kiss? Well, that happened during his freshman year in college.

Levy hosts about 30 salons a year each attended by 60 people, and maybe 40 more intimate dinners annually with a dozen or so guests. Most of the events are in New York, where he lives, and Los Angeles — but they’re also in San Diego, Miami, Park City, Utah, and elsewhere. His guests don’t just come to the gatherings — they help cook and clean up afterward.

“My friend Anthony came over after one of the dinners and went into the kitchen to say hello — and almost fell over when he saw [basketball great] Isiah Thomas doing the dishes,” Levy, 36, told JTA.

Just how Levy went from social outcast to major influencer is an incredible story — one he details in his new book, “The 2 AM Principle: Discover the Science of Adventure,” a guide to living an adventurous life.

“That means living outside your comfort zone, making a commitment to growth and development,” he said. “It is what makes life enjoyable.”

It’s a journey that began when he was in the eighth grade at Heschel, when a teacher’s innocent social experiment resulted in a devastating revelation.

“She thought she was doing something wonderful,” Levy said. That “something wonderful” was to ask each student in the class to privately submit the name of two people they’d like to sit next to and two they wanted to avoid.

“I unfortunately discovered I was the kid no one wanted to sit with,” Levy said.

“You know how your heart sinks when you discover something [terrible]?” he said. “I was never the most popular kid in the class, but to discover that I was a social outcast was terribly disheartening.”

There is a happy ending — eventually the ugly caterpillar became a social butterfly.

As he details in his book, Levy — whose “day job” is a behavioral scientist and business consultant who advises corporations how to attract customers —  suggests the best way to come out of your shell is to get out of your comfort zone. To that effect, he’s run with — and been trampled by — the bulls at Pamplona and swum with penguins in the Antarctic.

Of course, going from nebbish to cool takes time.  At first, he said, “I tried to figure out ways to get closer to the kids in my class. I used to watch ‘Star Trek’ and ‘Firefly’ while they were watching ‘Beverly Hills, 90210.’ I tried watching [their] shows but it didn’t work — it just wasn’t me.”

Levy didn’t make much progress until he started a new high school and saw an opportunity to reinvent himself. He was presented with more opportunities for self-transformation when his parents sent him to Camp Shomria, a kibbutz-style Zionist youth camp.

“It was a new start,” he said. “People didn’t have preconceived notions of me. Also, when you’re in an environment where people see you in a certain way, it’s really tough to change.”

In both cases, while he still wasn’t sitting at the cool kids’ table, Levy did make friends — and those friends would begat more friends.

So if you’re looking to “explore, meet people and see what life has to offer,” as he said — or simply move from blah to fab — the former nerd offers these tips:

Be patient — your time will come. “I never stopped being a geek,” Levy said. “But there was a cultural shift that allowed nerds to fit into the mainstream. It’s cool to be geeky now.” For example, Levy said the first dot.com millionaire showed you could bring ideas to life and become wealthy through programming; the iPhone made tech cool for the masses. And last but certainly not least, he said, the success of superhero movies brought comic books into the mainstream.

Curate the people around you. “Seek out people who have the characteristics you admire,” he said. If you want to be stylish, make friends with people who are fashion-forward and learn from them. Want to be more athletic? Hang out with athletes and, at the very least, you’ll spend more time in a gym.

Bring something of value to your relationships. For Levy, it’s creating a sense of community. “My true strength is bringing people together and helping them connect,” he said of his salons. At Levy’s events, people who’ve never met before are not allowed to disclose their occupations. (Though in the case of celebrity guests, like movie star Jena Malone, its usually obvious.) After the food is served, there’s a Q&A guessing game about who does what professionally.

Be willing to embarrass yourself. “The process of learning how to connect with other people is full of failures,” he said. “We screw up. We miss social cues.” Levy said he still remembers cringe-worthy attempts at meeting people, jokes that fell flat, people who just left him feeling “like a complete and utter idiot.”

But there are successes, too. He’s proud of the time he walked over to actor Ewan McGregor and told him, “I bet I can say three sentences and, when I’m done, you’ll cook me dinner.” In so many sentences, Levy described his get-together, and Levy said McGregor was so impressed he said: “There’s my agent over there. Set it up with him.”

When in doubt, cookies. “In America, nothing instills that positive feeling as a warm chocolate chip cookie,” he said, noting that people associate fresh-baked cookies with a caring parent. “Not only that, people will like you more than if they are holding something cold.”

Levy said that research has shown that if the last few minutes of an experience are not pleasing, the entire time will be remembered negatively. So, as part of his behavioral scientist gig, he suggests that companies give customers warm chocolate chip cookies as a parting gift.

Bake them yourself or buy them warm from Mrs. Fields — what’s important is to immediately put the cookies in an insulated container. If not, the likelihood is that you’ll eat them yourself. Just don’t ask this writer how he knows this stuff.