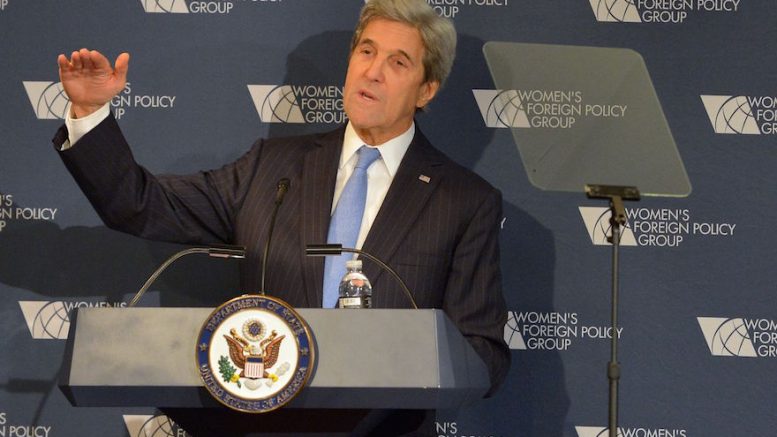 WASHINGTON (JTA) — Outgoing Secretary of State John Kerry signaled in a speech that the Obama administration was still considering action on the Israeli-Palestinian conflict in its final days, although it might fall short of a direct intervention on the issue.

There’s no way to “force-feed” peace between Israel and the Palestinians, Kerry said in a lengthy speech delivered Tuesday, Nov. 30 2016 at the Women’s Foreign Policy Group conference, but there are “other things we can do” to preserve a two-state solution.

It’s not clear whether President Barack Obama favors any action on the two-state front, and Congress and the mainstream pro-Israel lobby have said they would vehemently oppose it.

Kerry also defended the Iran nuclear deal, as did the outgoing CIA director, John Brennan, in an interview with the BBC, part of what likely will be a full-court press by the Obama administration to persuade President-elect Donald Trump not to kill the 2015 agreement that exchanged a nuclear rollback for sanctions relief.

The Obama administration is coming under pressure from groups that favor an assertive U.S. posture on the Israeli-Palestinian conflict to take steps to preserve the two-state solution before Trump takes office. Former President Jimmy Carter in a New York Times op-ed this week urged Obama to back a U.N. Security Council resolution that would recognize Palestinian statehood. J Street, a liberal Jewish Middle East policy group, also has urged Obama to take actions to preserve two states as an outcome, including backing a “balanced” Security Council resolution.

The Palestinians reportedly are preparing a resolution condemning Israel for settlement expansion that they hope a sympathetic nation will submit to the Security Council.

Kerry, who spearheaded the last major round of talks between Israel and the Palestinians, in 2013-14, said in his speech that “no one has expended as much time as I have to try to move the process forward.”

“But the old saying is real: You can lead a horse to water, you can’t make him drink,” he said. “If they’re not prepared to take the risks – everybody knows what has to be done – but if they’re not ready, then there’s no way to force-feed it. There are, however, other things that we can do that may try to save the possibilities of a two-state solution, and we have to think about that.”

Israel vehemently opposes outside intervention, a posture that is shared by much of Congress. In September, 88 senators signed a letter urging Obama to veto any Security Council resolution that recognizes Palestine. On Tuesday, the U.S. House of Representatives approved a nonbinding resolution that called on the government to oppose any “Security Council resolutions that seek to impose solutions to final status issues, or are one-sided and anti-Israel.”

The American Israel Public Affairs Committee backed the letter and the resolution, which were aimed at stemming any far-reaching final moves by the Obama administration. Obama has suggested that he is reluctant, in his final days, to hamper his successor with any last-minute major policy initiatives, including on Israel and the Palestinians. If Obama does pronounce on the issue, he may prefer a forum less dramatic than the Security Council, for instance outlining his vision for two states in a speech or news conference.

It’s not yet clear how Trump would approach Israeli-Palestinian peace. The president-elect has said he would like a crack at negotiating a deal. On the other hand, with his campaign’s approval, the Republican Party over the summer adopted a platform that for the first time since 2004 does not mention a two-state solution, and defers to Israel on what the parameters of peace negotiations should be.

Kerry in his speech also defended the Iran nuclear deal reached between six major powers, led by the United States, and Iran.

“Consider where we would be if Iran’s nuclear program was still going ahead full steam in the middle of all of this,” he said.

Kerry noted that before the negotiations began on the Joint Comprehensive Plan of Action, as the pact is known, Iran had the ability to produce enough fissile material for a nuclear device in two months and enough highly enriched uranium to build 10 to 12 bombs.

“That’s where we were – two months away from a bomb,” he said. “But under our agreement, Iran agreed to actually reverse that direction altogether.”

He cautioned: “The Iran agreement has made the world safer, including our allies and our friends in the Middle East.”

Brennan, who is scheduled to depart as CIA director in January, told the BBC this week that it would be the “height of folly” for Trump to tear up the agreement, saying it would lead to a nuclear arms race in the region.

Trump has said he would renegotiate the deal if not abrogate it outright, and has nominated as his CIA chief Rep. Mike Pompeo, R-Kan., a fierce opponent of the agreement. The president-elect also is considering deal foes for other top national security posts.

Al Monitor, a Middle East news site, reported this week that Kerry, in private meetings with Democratic senators, urged the lawmakers to do what they can to preserve the deal. Trump has a range of executive actions at his disposal to pull the United States out of the deal. However, if he chooses not to act, Senate Democrats, while in the minority, could filibuster any congressional effort to force Trump to pull out of the agreement.

Separately, the House on Tuesday passed two bills that would advance U.S.-Israel cooperation on cybersecurity. The bipartisan bills, which would expand existing joint research and create a grant for new development, were introduced by Reps. John Ratcliffe, R-Texas, and Jim Langevin, D-R.I., after they joined a congressional delegation visiting Israel this summer.

Langevin in his release alluded to what intelligence officials have said are likely Russian government-backed hacks during the past year on the Democratic Party and senior figures in the party.

“My trip to Israel with Congressman Ratcliffe was an illuminating experience and reinforced my belief that our countries have much to learn from one another when it comes to cybersecurity,” Langevin said in the release. “This belief has only been reinforced in the intervening months as we saw cyber-attacks that targeted the very foundation of our nation, our electoral system.”

Be the first to comment on "John Kerry: There are ‘things we can do’ to preserve two-state solution"