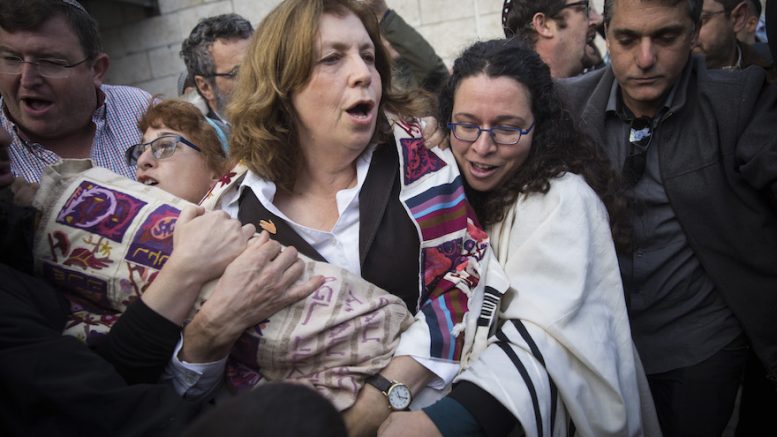 Orthodox Jews trying to prevent a group of Conservative and Reform rabbis and Women of the Wall members from bringing Torah scrolls into the Western Wall compound in Jerusalem, Nov. 2, 2016. (Hadas Parush/Flash90)

JERUSALEM (JTA) — Like many of my friends, I grew up in the United States with a strong affinity for Israel. As a child we saved money to buy trees, learned Israeli songs, studied Hebrew, visited Israel and marched in Israeli Independence Day parades. I recall well that my parents encouraged me to give part of my bar mitzvah gifts to Israel. Ultimately I made aliyah.

Tensions arise whenever the interests of two parties may not perfectly align. This seems to be occurring more frequently between the North American Jewish community, with its pluralistic nature, and an Israeli government that gives into haredi Orthodox demands over promises and commitments made to the Jewish communities in the Diaspora.

Just a year ago, Israel’s prime minister stated that the Israeli government and the Jewish Agency will for the first time invest in the development of Reform and Conservative Jewish congregations in Israel. He went on to say, “As prime minister of Israel I will ensure that all Jews – Reform, Conservative and Orthodox – feel at home in Israel.”

On Jan. 31, Benjamin Netanyahu’s government approved an agreement to create an egalitarian prayer space along the Western Wall and establish a governing body to administer the venue. This was the result of three years of intense negotiations, with Netanyahu’s top adviser serving as the negotiator.

Thus far, no money has been forthcoming for non-Orthodox congregations and the Western Wall agreement has not been put in place. Excuses abound. Mr. Netanyahu has called for patience. But how long can one be patient when it becomes increasingly clear that the situation is only worsening? Shas, a fervently Orthodox political party, has just introduced legislation that would scuttle the entire Western Wall agreement and create strictly haredi oversight to the area, including the site designated for egalitarian worship.

For the past three years five Ugandan Jews, known as Abayudaya, have been trying to come to Israel to study at the Conservative yeshiva. All are converts to Judaism through the Masorti/Conservative movement. The Jewish Agency has accepted the Abayudaya as a “recognized community.” But  despite written assurances from the Prime Minister’s Office that visas would be issued, student visas have yet to be forthcoming. The one member of this community who applied for aliyah has had his paperwork sit in the offices of the Interior Ministry for over two years.

A group of nine Masorti/Conservative Jews by choice from Venezuela applied to immigrate to Israel in April. After receiving the required documents, the Jewish Agency approved their aliyah. The Interior Ministry, however, has demanded a series of redundant and unnecessary additional documents; they have all been submitted.  The situation in Venezuela is dangerous. Beyond the civil strife and collapsed economy, food and medicines are in very short supply. But none of this seems to worry the Interior Ministry officials, who act as though they are above the laws of our country.

But this should come as no surprise. The minister of the interior, Rabbi Arye Deri, said recently:

“Last week someone said that the Reform are our brothers, but we completely disagree with them. We reject their ways, etc. The truth is that they are NOT our brothers and we do not want such brothers. Those that stick a knife in the back of the Jewish people cannot be our brothers. Those who are the cause for the assimilation of millions of Jews cannot be our brothers. No how — no way! Such a person is an adversary and an enemy. One who mocks and prostitutes our tradition, that is to say, all of the holy Torah of the Jewish people for which we have sacrificed our lives from generation to generation for thousands of years, is not a brother. One who is a traitor and betrays his parents, grandparents, and all of the generations that came before, is not a brother. Not even a lost brother. He has thrown off the yoke and one must fight against him with all means available, and never give any sort of recognition nor any foothold.”

So while the prime minister calls on the leaders of the non-Orthodox movements, both here in Israel and in the Diaspora, to be patient, the Venezuelan Nine live in daily fear as they do their best to survive. The Ugandan Five wonder why their beloved Israel turns her back on them.

I, too, wonder. Two weeks back, Knesset member Dudu Amsalem, chair of the Israeli parliament’s Internal Affairs Committee, ended a hearing about the Western Wall agreement by stating: “I just don’t care about any favors the Jews in the Diaspora do for us” in support of Israel. “The Jews of North America should have no right to influence our policy. If this insults them, so be it. They are not doing us any favors.”

So there you have it. A prime minister who fails to honor his commitments. An interior minister who reviles the non-Orthodox — and he is far from the only such member of the Knesset. And the chair of an important government committee that, in his ignorance, dismisses the Diaspora community with ease.

Maybe they are right. Maybe Israel can stand on her own without the backing of the Jews of the Diaspora. Maybe. But I, for one, doubt it.

(Rabbi Andrew Sacks directs the Rabbinical Assembly in Israel and the Bureau for Religious Affairs of the Masorti movement.)

Be the first to comment on "Op/Ed: While Israel tarries on pluralism, the Diaspora may be running out of patience"