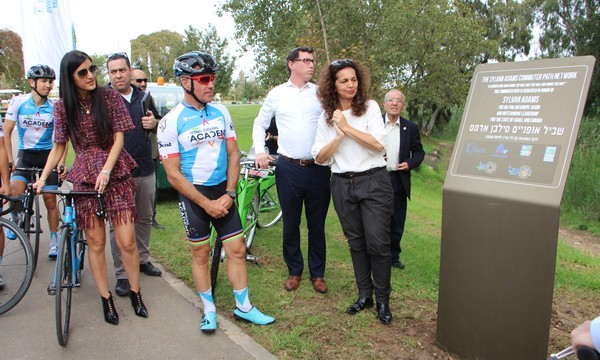 The Sylvan Adams Commuter Path Network, which will connect Tel Aviv to its suburbs, has just begun.

The first route of the series was inaugurated recently in HaYarkon Park, in the presence of Tel Aviv Mayor Ron Huldai, representatives of KKL-JNF and JNF Canada, and the donor, JNF Canada Friend Sylvan Adams.

At the ceremony, donor Sylvan Adams told the audience that the point of the commuter path network was to connect residents between Tel Aviv and the surrounding suburbs.

“The idea here is to encourage people to do something that is healthy, time saving, and environmentally friendly,” he said. “So leave the car at home, get on your bike, try it once; you may never want to get in the car again. The more we decrease traffic, people will be healthier, and the air we breathe will be cleaner.”

The new bike path connects the neighborhoods next to HaYarkon Park with Bnei Brak and Ramat Gan. The route follows the course of the Yarkon River and cyclists get a view of the river scenery.

“The new path will give bike riders a safe and healthy way to get to work, and they will be able to enjoy the greenery of HaYarkon Park on their way,” said Tel Aviv Mayor Ron Huldai. “Tel Aviv is a city where all types of people live next to each other, and I want to thank everyone who was partner towards furthering this common goal.”

The asphalt path is 3 meters wide, with a dividing line down the middle ensuring safe and comfortable cycling in both directions. Work to create the path included paving, planting, pruning, rehabilitating vegetation and lawns, lighting and regularizing the sewage canal.

“Besides its support of communities and its concern for quality of life, KKL-JNF is totally committed to caring for the environment,” noted KKL-JNF Directorate Member Ofra Carmi. “Bicycling contributes to people’s health and to protecting the environment. This is our way of ensuring a better future.”

“More and more of the city’s residents are exchanging their cars for bikes, and I am very happy about the opening of the new bicycle trail that will serve you.

Singer Jenny Polotsky sang for the audience during the event. She moved everyone present when she sang “Hallelujah”, which was written by legendary Canadian-Jewish musician Leonard Cohen, who originated from Montreal and died in November 2016.

Sylvan Adams was the guest of honor at the 2018 Montreal Negev Dinner, during which contributions to develop the network were raised.

“This was the first time that the guest of honor entered the dinner riding his bicycle,” he told the amused audience. “This project proves that together we can always accomplish much more than we can imagine.”

Adams immigrated to Israel about two years ago and today he lives in Tel Aviv. It goes without saying that he arrived at the dedication ceremony riding his bike. As an avid bike rider, this is not the only project that he has helped to promote in Israel. It was his contribution that made it possible to hold the Giro de Italia in Israel a few months ago. He is also one of the promoters and supporters of the velodrome – a NIS 70 million Olympic-style bike-racing installation located in HaYarkon Park, the first of its kind in the Middle East.

At the conclusion of the ceremony, the participants partook in a group bike ride, together with professional cyclists from the Cycling Academy group.

On their way, they stopped to unveil the donor appreciation plaques that were installed along the way.

“I’d like to call this the first element of creating a forward thinking Tel Aviv, becoming the Amsterdam of the Middle East,” Adams concluded.