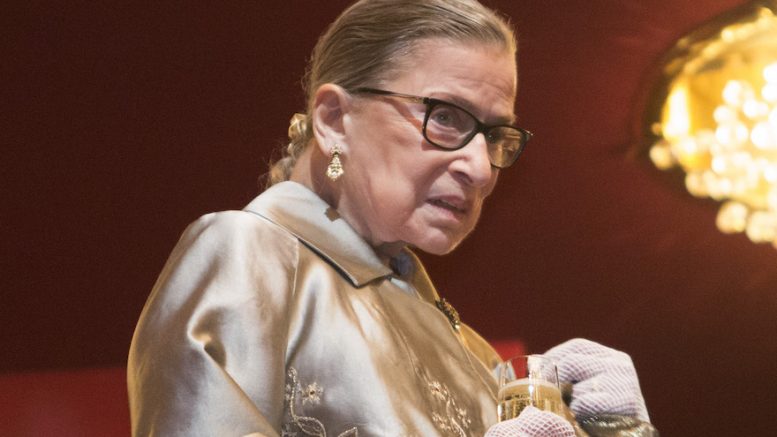 WASHINGTON (JTA) — The ceremony was cozy formal: Yes there was a color guard and a military band, but the Supreme Court justice brought along her personal trainer, and one of the speakers introduced Ruth Bader Ginsburg as “The Notorious RBG.”

The Department of Homeland Security randomly selected 31 Washington, D.C.-area residents to be sworn in Friday at the National Archives rotunda  in a chamber that houses some of the nation’s founding documents, including the Declaration of Independence.

DHS and the Archives didn’t exactly keep it a secret that Ginsburg was the person swearing them into citizenship — media were invited, after all — but many of the residents, from 26 nations, including Israel, gasped in surprise and delight when they found out who would be presiding.

Opening the session by declaring the Archives to be a court for the duration of the proceedings was Bryant Johnson, a District Court staffer who in his spare time is Ginsburg’s trainer. He’s helping her build up strength after she fell and broke three ribs.

It was David Ferriero, the archivist, who welcomed Ginsburg with the “Notorious” sobriquet — one happily embraced by the tough-minded liberal justice. At 85, she has sworn to stick out President Donald Trump’s first term.

Her very appearance may be seen as the mildest of rebukes to an administration that has placed unprecedented strictures on immigration. Ginsburg in a 10-minute speech after the swearing-in told the new Americans that her grandparents and father were immigrants.

She spoke of the United States as just starting its journey to the “perfect union” the founders envisioned, recounting the blights of slavery, bigotry and sex discrimination, but also emphasized the country’s promise.

“What is the difference between a bookkeeper in New York’s garment district and a Supreme Court justice?” she asked. “One generation.”

Above all, Ginsburg urged her fellow Americans, vote. “You could play a vital part, first and foremost, voting in elections,” she said.

Be the first to comment on "Ruth Bader Ginsburg swears in new immigrants, wows them with her story"