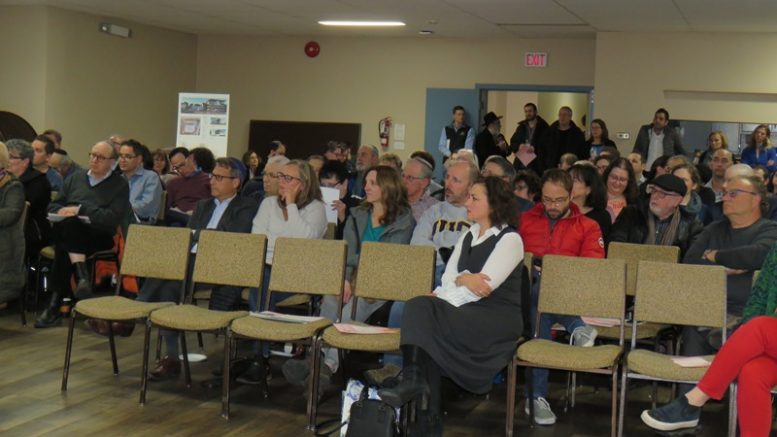 Close to 150 people attended the recent JFED AGM which included a vote to continue the negotiations process with Talmud Torah to build a JCC in Edmonton.

(EJNews) – There was a very productive and well attended Edmonton Jewish Federation AGM held on December 10 at the Beth Shalom Synagogue. The meeting included several year-end reports as well as the election of new JFED board members. The final report was an update of the JCC committee by Clive Oshry which culminated in a community wide vote.

The JFED report by CEO Debby Shoctor outlined the many successful programs and activities held by Federation over the past year. The UJA report contained some information that was germane to the vote. During that report UJA co-chair Karen Oshry announced that the previous year’s UJA campaign had fallen somewhat short of its goal and it looks like the current year’s campaign will also be short, generating just over $1 million but under the $1.1 mil goal. The report also included an announcement that there has been a 15% cut in allocations across the board to all beneficiary agencies.

A highlight of the meeting also included wishing JFED CFO Betty Koss a fond farewell with all speakers expressing their heartfelt appreciation for her over 20 years of service to our community.

Clive Oshry presented an overview of the JCC building committee to date outlining the community meeting process that has been in place to get to the current plans. He said that the current plans being presented to the community are still in flux but there is assurance that the funds available will not cover the cost of the project. He said that the stand alone option which had been previously discussed for the JCC on the Talmud Torah property was no longer an option because it was cost prohibitive and the committee had opted for the attached version because it had the elements that the committee had expressed as being important for a JCC – including a family friendly place to eat, meet, congregate and visit for all community members regardless of levels of observance or affiliation.

The purpose of the vote was fundamentally to provide an agreement in principle for the Federation board to proceed with the proposed JCC project negotiations – subject to legal and contractual approvals. He said that there are still many things to tweak in terms of design, permits and other things but a no vote would indicate that the committee should go back to the drawing board about a JCC project.

At the meeting, the community voted (80 in favour, 34 against) for the Board of Directors of the Jewish Federation of Edmonton to proceed with negotiations to build a JCC at the Talmud Torah. If a final agreement can be reached with the Talmud Torah and Edmonton Public Schools, the Board has the authority to approve it. As a part of the motion, the community has directed that at least $1 million be raised by November 30, 2019.

Now that the community has given the green light for the JFED board to proceed with the negotiations, they will await the go-ahead from the Talmud Torah Society.

If all goes according to plan, the JFED Board of Directors will convene early in the new year to discuss next steps, including finalizing negotiations with the Talmud Torah and looking at details surrounding a campaign to raise funds.

The Jewish Federation of Edmonton and its fundraising arm, the United Jewish Appeal announced that they require a significant number of volunteers throughout the year. The next steps to get the JCC built will require even more volunteers than they normally have.

Click here for more information about the proposed JCC. If anyone is interested in getting involved with the JCC or with any of their other volunteer opportunities, contact Debby Shoctor at debbys@edjfed.org or Steve Shafir at steves@edjfed.org.