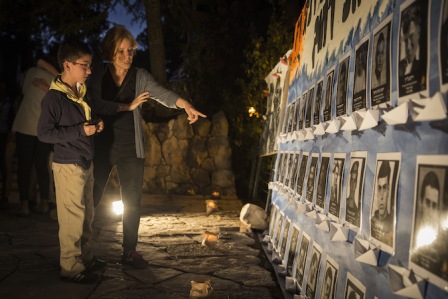 Israeli scouts of the Modiin Tribe during a ceremony commemorating the fallen Israeli soldiers, on the eve of the Israeli Memorial Day at the Mount Herzl military cemetery in Jerusalem, April 21, 2015. (Hadas Parush/Flash90 via JTA)

The Day of Remembrance for Israeli Fallen Soldiers and Victims of Terrorism is being commemorated around the Jewish world on April 22. In Edmonton, a community wide service will be held on April 22 at the Beth Israel Synagogue. The ceremony will start at 7 pm and the service will be conducted in both English and Hebrew.

(JTA) Israelis “are not a people of war,” President Reuven Rivlin asserted at a candle-lighting ceremony at the Western Wall in Jerusalem to mark the start of the country’s Memorial Day.

Rivlin spoke Tuesday night, April 21, after a one-minute siren sounded throughout Israel, bringing the nation to a halt on a commemoration known in Hebrew as Yom Hazikaron.

“Our sons did not go to battle thirsty for blood. Not this past summer, not those before, not in our sorrow in those that, God forbid, are still to come,” he said. “We are forced to fight. Our children are sentenced to continue to hold a weapon in order to guard our borders, to defend our homes, on the factory that we have built here. The defense of our existence is the way of our lives.”

Rivlin added, “There is no camp – no camp – in which there is no death. I’ve seen the sons of kibbutzim and settlements, moshavim and villages, Jews and non-Jews, urban people, lone soldiers and immigrants. I came to them too late. I got to know them when they were no longer here.”

Earlier, Prime Minister Benjamin Netanyahu held a ceremony at the headquarters in Jerusalem of Yad Lebanim, the association for families of fallen soldiers. He spoke about his family’s continuing grief for his brother, Yonatan, who died in 1976 during the rescue of kidnapped Israelis in Entebbe, Uganda. The prime minister had visited his brother’s grave earlier in the week in order to avoid disturbing bereaved families on the actual day.

A second siren, two minutes long, sounded at 11 a.m. Wednesday and marked the beginning of official memorial ceremonies throughout Israel.

Be the first to comment on "Edmonton commemorates Israel’s Memorial Day: April 22"