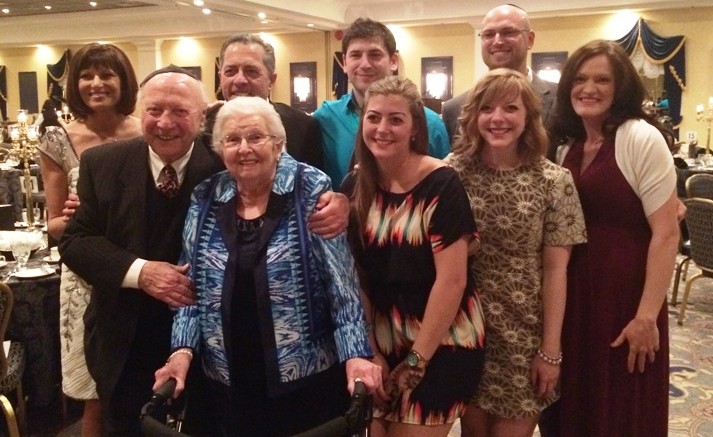 On April 19, close to 300 people came together at the Fantasyland Hotel to roast, toast and otherwise honour Jeff Rubin for his commitment to the Congregation Beth Shalom and the greater Jewish community of Edmonton.

Highlights of the event included a number of speakers who spoke about Jeff’s kindness,  generosity and leadership while lightly mocking his sense of humour and proclivity for gaffes. Jeff, ever the good sport, joined the crowd in receiving the loving teasing from his wife Gaylene Soifer;  their blended family – Jared & Hannah and Adam Paull and Taylor and Kaylee Rubin; his long time friend Justice Eric Macklin and MC Howie Sniderman. 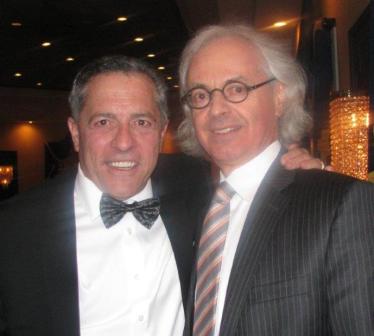 The atmosphere in the room was warm and friendly; it was an exceptional  celebration of family, friends and community.  The room decor was elegant and lovely and the food was both kosher and delicious  In honour of Jeff, the theme of the evening was Live, Love, Laugh and Learn, accenting the values that Jeff holds dear.

Beth Shalom Rabbi Kliel Rose joked that Jeff had been his “first” explaining that Rubin had spearheaded the hiring committee that matched Kliel with the position at Beth Shalom. He lauded Jeff’s patience and assistance in making the move and the transition to Edmonton and the wonderful congregation at Beth Shalom. 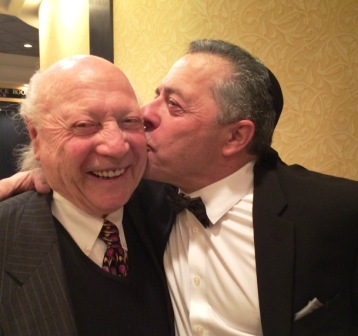 Jeff shows his gratitude and love to his dad Abner Rubin

The honour of HaMotzi was given to Jeff’s father Abner Rubin, a beloved member of Beth Shalom and the longest serving member of Edmonton’s  Chevra Kadisha. At 91, Abner is kind, caring, and has the energy and enthusiasm of a seventy year old as he continues to tirelessly volunteer his services to help make the community stronger.

Guest speaker Henry Gizmo Williams spoke from the heart about his experiences as a football player with the Edmonton Eskimos regaling the crowd with anecdotes from his early days coming to Edmonton from the deep south.  His stories were heartwarming, humourous and inspirational,  a testament to his determination to overcome adversity and achieve true greatness while remaining humble and grounded. 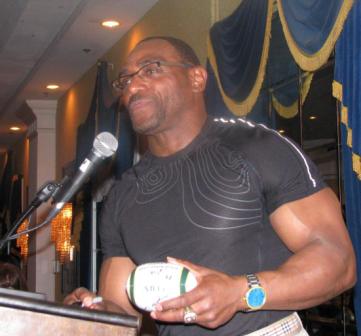 We laughed in abject horror as he told about driving to Edmonton in ‘good time’ because he hadn’t realized that miles per hour had changed to kilometres  per hour.  And about his trepidation when his then coach sent him on a speaking engagement to  the Town of Slave Lake. “Coach, I don’t think I can go there,” he said cringing.

Justice Eric Macklin spoke about his formative years with Jeff as a friend and a neighbour. He noted that their Talmud Torah classmate Gord Bushewsky had served as president of Beth Israel Congregation for an overlapping period with Jeff’s reign at Beth Shalom. “Who would have imagined that these two youngsters would grow up to have leadership positions with the two largest Jewish congregations in Edmonton?” marvelled Macklin.  “Certainly not Moreh Yedlin!”

He lauded Jeff for his contribution to Beth Shalom and in particular for his role in brokering the deal to sell a portion of Beth Shalom’s land to Beit Horim – Our Parents Home.  Macklin said that Jeff had skillfully facilitated that important project for the Jewish elderly, that was long needed in our community. 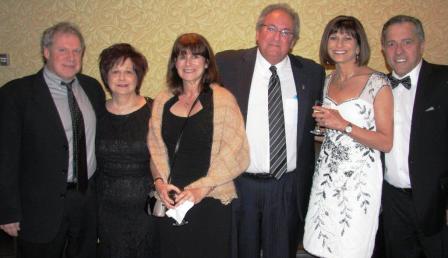 MC Howie Sniderman was hilarious in asking the great Gizmo for his autograph on a prized mini football. He explained that his son, Talmud Torah teacher Ari Sniderman was in Israel with the grade 9 class and couldn’t attend the evening gala.  So please, Howie implored Gizmo, sign this football and make it out to my good friend Ari, from your good friend Gizmo Williams. “Oh and by the way, spell Ari – H O W I E.”

The evening’s entertainment included a lovely and lively musical rendition by singer Bert Malo, accompanied on the piano by Paul Polushin, of songs from two of Jeff’s favorite musicals – “Les Mis” and “Fiddler on the Roof.”

The event concluded with a heartfelt response from Jeff that was most appreciative, humble, and sprinkled with comic remarks. He thanked event chair Michelle Huberman and the hard working steering committee – which included Howie and Debbie Sniderman, Len Dolgoy  and Jeff’s  wonderful wife Gaylene Soifer – for their tremendous work. He thanked his children, his father Abner and his mother Hilda z’l and his sisters, two of whom were able to attend the gala.  He thanked the volunteers who worked behind the scenes. He thanked the Rabbi and the other speakers for their kind (and clever) words; the Beth Shalom congregation and all the friends who attended the event.

Photos courtesy of the Edmonton Jewish Pipeline and Kaylee Rubin 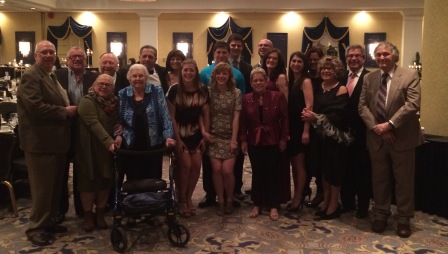 The extended family celebrates at the Beth Shalom Gala.