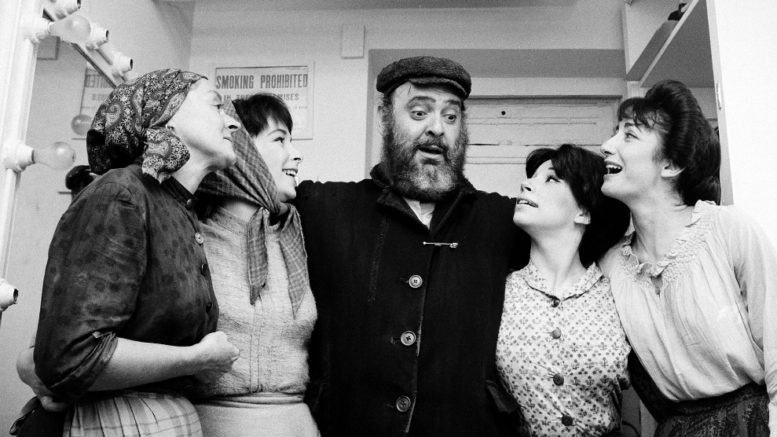 (JTA) — Instinctively, director-choreographer Jerome Robbins (née Rabinowitz) knew the musical that he was preparing for Broadway was something far greater than just the story of a Jewish family facing persecution in Czarist Russia.

So at one of his early meetings with the creatives behind the project, he made clear the route he intended to take them on: “Fiddler on the Roof” touched on many themes, he said, but at its core it was about tradition.

And thus was born one of the great opening numbers in the history of musical theater and the groundwork for one of the most important and popular plays ever. It opened in September of 1964 and became the longest-running Broadway musical of the time. It ran for a decade, spawned five Broadway revivals and has been performed everywhere from Vienna to Mexico City to Reykjavík, Iceland.

A new documentary, “Fiddler: Miracle of Miracles,” digs into the show’s origin story and much more.

Filmmaker Max Lewkowicz expertly combines archival footage with interviews of show participants from over the years to weave a story that is at once heart-warming, entertaining, informative and in some ways eye opening.

Ironically, considering its subsequent success, “Fiddler” had a rocky start. A friend gave lyricist Sheldon Harnick a copy of the book “Wandering Stars” by Sholem Aleichem. Harnick thought it would make a great musical, and forwarded the book to his writing partner Jerry Bock who agreed and in turn sent it to playwright Joseph Stein. Stein, however, didn’t believe it would work as a musical. Instead, he suggested another Aleichem work, “Tevye the Dairyman,” a book of stories that his father had read to him in the original Yiddish.

Though it had the backing of the three award-winning Broadway pros, it was still far from a sure thing. Producers were wary, afraid it was too Jewish. “What do I do once we run out of Hadassah benefits?” is what one allegedly said. It wasn’t until the late Harold Prince signed on to produce that the play achieved any momentum.

Even then, success was not assured. Reviews following an out-of-town opening in Detroit were uniformly negative. Even after substantial changes, The New York Times’ influential critic at the time, Walter Kerr, offered a tepid review after its Broadway debut.

But the next day, there were lines around the block.

The film is replete with fascinating anecdotes about the process: how star Zero Mostel and Robbins feuded because the latter named names before the House Un-American Activities Committee; how Robbins attending a Hasidic wedding provided the inspiration for a fun dance scene; how the play was initially intended to be called “Tevye” until someone saw Marc Chagall’s painting “The Fiddler” and renamed the play as a tribute to him.

There have been at least two books written about “Fiddler” — but while both share many of these anecdotes, neither can satisfactorily describe the gleam in the eyes, the smiles on the faces and the pride in the voices of the dozens of actors interviewed here who have played a part in the “Fiddler” phenomenon.

Lin Manuel-Miranda, who is interviewed in the film, first performed in a “Fiddler” production in 6th grade. He was so enchanted by the experience he and his entire wedding party rehearsed and choreographed the song “L’Chaim” as a surprise his bride, Vanessa. The performance went viral.

Harnick remembers attending an early Tokyo performance and being asked: “Do they understand it in America? It’s so Japanese.”

Although there are no overt political references, ties to the current spike in anti-Semitism and hate seem obvious. As Danny Burstein, who played Tevye in the last Broadway revival, notes: “As long as human beings exist and continue to have troubles, ‘Fiddler on the Roof’ will be there.”

“Fiddler: Miracle of Miracles” opens Aug. 23 in Los Angeles and New York with additional venues to be announced.