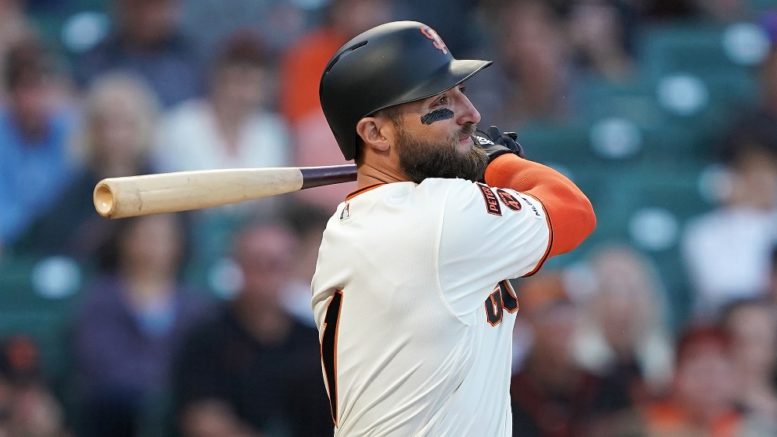 SAN FRANCISCO (J. The Jewish News of Northern California via JTA) — For a professional athlete, Kevin Pillar is disarmingly open.

Pillar, one of about a dozen Jewish players in the major leagues, spoke to the J. weekly from the San Francisco Giants clubhouse recently amid the team’s seven-game winning streak, just hours before a game against the New York Mets.

Half-dressed, in compression shorts, a Superman T-shirt and horn-rimmed glasses, the Giants’ starting center fielder talked candidly about his move to a new city (and a new country) in April and his embrace of being identified in a select group fairly considered heroes to a segment of American Jews: Jewish major leaguers.

“I try to take that responsibility for letting people know that there are people like myself, like [All-Star shortstop Alex] Bregman, like [veteran infielder and World Series winner] Ian Kinsler, that come from a Jewish background and have been able to be successful major leaguers,” he said.

Drafted by the Toronto Blue Jays in 2011, Pillar spent all or parts of six seasons with the team, where he formed close relationships with teammates, coaches and other members of the organization. He was embraced by the local Jewish community (“They make sure I have somewhere to go for the holidays,” he told the Philadelphia Jewish Exponent in 2016).

But less than a week into the 2019 season, he was abruptly traded to the Giants. In an interview with a Canadian news organization the morning of the deal, he held back tears explaining what was going through his head.

“I spend more time with people here than I do with my own family,” he said. “It’s all I’ve ever known.”

Some fans in Toronto lamented the deal — Pillar was beloved, known for his durability and defensive ability (which often led to remarkable diving catches). When he returned there as an opposing player on April 23, he received a standing ovation.

Pillar, 30, grew up in the tidy, affluent San Fernando Valley neighborhood of West Hills, California. He was a three-sport standout in football, baseball and basketball at Chaminade College Prep, a Catholic high school, but his parents weren’t sports-obsessed. He said he put competitive sports aside during the summer and liked to ride motorcycles with his older brother, Michael.

Growing up, he identified as a “half Jew” — his mother, Wendy, is Jewish. His father, Mike, is Christian.

Both Kevin and his brother had bar mitzvah ceremonies, encouraged by their maternal grandparents.

“We were extremely close with my grandparents growing up,” Pillar said. “My grandma, more so than grandpa, really wanted all of her grandchildren to have bar mitzvahs or bat mitzvahs. It was kind of a way of honoring my grandparents at a young age.”

Pillar said religion did not “carry a whole lot of weight” when he was a kid. Back in 2002, preparing for his bar mitzvah “seemed like a pain in the butt,” he said a few years ago. But when he took a religious studies course in high school, he came to value what he had achieved.

“That’s where I learned what my portion at my bar mitzvah was really about,” he said. “I was able to fully understand what I was able to accomplish at such a young age. I enjoyed that.”

Once Pillar became a public figure, and realized how few Jewish players were represented in the major leagues, it became more apparent “that it’s something I need to embrace a little bit more.”

He welcomed the Exponent interview in 2016, spoke in front of hundreds at a Maccabi Canada event that same year and said he was open to playing for Team Israel in the 2017 World Baseball Classic.

According to the Jewish Baseball News, a website updated daily by Jewish sports enthusiast Scott Barancik, Pillar is one of 11 current Jewish major leaguers, along with Los Angeles Dodgers outfielder Joc Pederson, 27; Bregman, 25, a two-time All-Star who was a big part of the Houston Astros’ 2017 World Series title; and Kinsler, 37, a four-time All-Star second baseman now with the San Diego Padres.

Pillar’s teammates know he’s Jewish because he told them. Religion typically doesn’t get much public attention, he said, “I guess unless you’re Jewish. Because there’s just so few of us in the game, so you kind of stand out.”

Introspective and thoughtful, Pillar sometimes wears his emotions on his sleeve. Three days after the interview, in the eighth inning of a tie game against the Mets, he took issue with a strike call by home plate umpire Mark Ripperger and was ejected after some choice words. Teammate Pablo Sandoval helped guide the heated outfielder back to the dugout.

For Pillar and his family, the transition after the trade wasn’t easy. He and Amanda, who married in 2014, and their young daughter Kobie had just moved into a new house. The Blue Jays play in the American League and hold spring training in Florida, so he had little exposure to the National League Giants, who train in Arizona.

“[I was] trying to make new friends with guys that I haven’t interacted with a whole lot,” he said.

Ultimately it was baseball that helped Pillar get grounded.

“Obviously there are some challenges changing leagues, facing new pitchers, positioning yourself against different hitters,” he said. “But baseball is baseball. Baseball was always my escape from everything that was going on. And I think once I was able to move my family out of the hotel and find a place, we began to settle in here.”

The Pillars are renting a house in the East Bay, marking a return to California for both of them. Amanda is from El Dorado Hills, east of Sacramento, and she and Kevin were college sweethearts at Cal State Dominguez Hills, where she played on the women’s soccer team.

“Having both of our families a lot closer, it gave us a little bit more comfort,” he said.

Now that he’s settling in, Pillar is posting some of the best numbers of his career. Since arriving in San Francisco, he’s batting slightly below his career average of .258, but has hit 15 home runs and driven in 63 runs — near career highs — with 40 games left to play.

He’s also made a flurry of highlight reel-caliber plays in the outfield, catching the attention even of opposing managers. Giants manager Bruce Bochy said that after the Giants swept a four-game series in Denver in July, Colorado Rockies manager Bud Black told him that “the play of Pillar out in the outfield changed a couple of those games.”

“For me, I think it’s potentially being in a new place and really wanting to make my impact be felt,” Pillar said of his performance, “in some way impress your new teammates.”

He added, “I’ve been doing this for a while now. Sometimes it’s just a matter of time before things fully click.”

Pillar was always a talented athlete, but his rise to the major leagues was no certainty. He wasn’t far and away the best player on his Little League team, he said, nor was he recruited by a Division I baseball school. Cal State Dominguez Hills is a Division II school.

While most major leaguers are drafted out of high school or after one or two years of college, Pillar graduated with a degree in math and business after four years. Right after he was picked in the 32nd round — 979th overall — by the Blue Jays. He was offered a paltry $1,000 signing bonus.

“Pillar’s rise to the majors defies all odds,” said one headline on a Canadian sports website during his 2013 rookie season in Toronto.

It’s fair to say that Pillar, who came to the Giants with a recently signed $5.8 million one-year contract, has cemented his place in the major leagues. But his identity as an underdog is still a part of him. The first sentence of his bio on Instagram reads “From 32nd Round to the Show.”

“Similar to being Jewish,” he said, “there aren’t a lot of people that have taken my path to the big leagues … it’s something that I will always identify with. Because I know the challenge and struggle it took in order for me to get here. I know how much hard work behind the scenes it took. For the youth, for the people in a similar position to mine 10 years ago, 15 years ago, even 20 years ago. I will always share my story. I will always try to be the poster child for that story.”