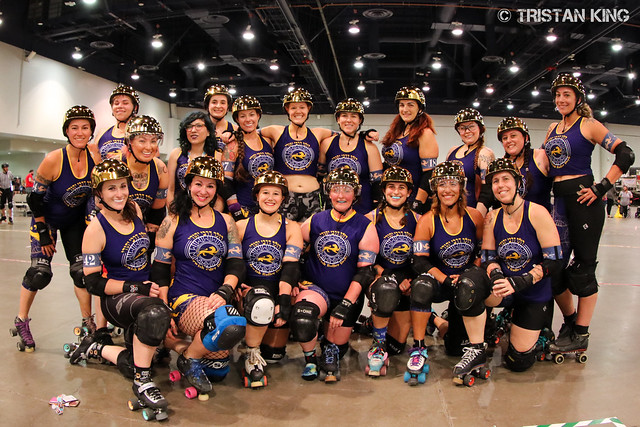 (Alma) – Roller derby is known for many things: badass women, hilarious punny names, and of course, amazing feats of roller skating strength. One thing not largely associated with roller derby? Judaism, but that’s changing thanks to people like Jodi Kansagor, AKA Jodi Bon Jodi. Jodi, who grew up in New Jersey and now lives in Portland, Oregon, is a co-captain of a new Jewish roller derby team that recently competed for the first time. We chatted with her about why she started a Jewish roller derby team, challenging the paradigm of what a “nation” is, and what being on a Jewish team means to her.

Can you talk about your decision to start Jewish Roller Derby?

Roller derby has a Roller Derby World Cup, and the last cycle of the World Cup was in 2018. And personally, I was thinking, how could I get involved in this? I am from the U.S.; Team U.S. is a very high level team, so most normal skaters in the United States will look to a team that [reflects] their ancestry to skate on — you just have to prove that your family is from there. As a Jewish person in the United States, looking back at the countries that my family physically came from, I did not find any national solidarity.

In my family, I’m mixed Ashkenazi and Sephardic. So on my dad’s side, we’re Turkish and Moroccan, and there are no roller derby teams in Turkey or Morocco. And then on my mom’s side, we’re Polish. I did not want to skate with Team Poland for so many reasons: It’s one of the most anti-Semitic countries in the world, and I personally do not have any Polish identity.

I was talking with a friend of mine, who is also a Jew, and her family’s from Russia. She decided to skate with Team Russia and had a not terrible experience, but didn’t necessarily feel like she was part of the team in the same way that other people did. So we thought: Why don’t we create our own team?

As Jews, we’re an ethno-religion that we see as a nation without borders. We’re all over the world! We are a religion, but we’re more than a religion because we’re a culture and we’ve been insular for so many years but have maintained an identity as Jews.

How did the World Cup react to the formation of a Jewish team?

We sent an email to the World Cup organizers before we even announced that we wanted to do it, and before we even found teammates. I sent them an explanation that was similar to what I just said to you — talking about how even if I wanted to go back and find paperwork about my family, most of it says “stateless,” because they came to the U.S. after the Holocaust from a displaced persons camp. They weren’t being claimed by any of the countries that they lived in.

The initial reaction from the World Cup Nations committee was no. They rejected our proposal because we didn’t fit their definition of what a nation is: a political state with boundaries.

Was there any precedent for your team?

In the last World Cup cycle, a team was founded called Team Indigenous, which is indigenous folks from all over the world. They’re an amazing team and they’ve been a huge inspiration for us in what we’re doing, and they did compete in the World Cup.

So, in the response from the World Cup Nations committee, they basically [wrote], “Here’s our definition of nation, you don’t fit it, and yes, we do acknowledge that we made exceptions for Team Indigenous, Team Korea, and Team West Indies, but we’re not going to make an exception for you.”

How’d you react to the rejection?

So I wrote back saying no, I would like to challenge you. Why are you saying no to us? Why did you make exceptions for these other teams? And what grounds did those teams [get approved on], but we didn’t get? And also I [asked]: Why are you embracing the dominant paradigm of what a nation has to be, when we as roller derby skaters get to challenge that, because we’re challenging so many other things? I used a little shame tactic on them.

A little Jewish guilt goes a long way, right? Especially with people that aren’t expecting it, because they didn’t grow up with a Jewish mother! So they don’t actually know how to deflect it like we do.

But I got them thinking, and what came out of that now is that there is a group of folks from the Nations committee — myself and my co-captain from Jewish Roller Derby, as well as representatives from Team Indigenous — that are having a conversation [about] redefining what nation means to the Roller Derby World Cup. We are creating a definition that’s more based on culture and cultural ties than actual borders, which opens up a lot of possibility.

Another big influence on Jewish Roller Derby is a group called the Black Roller Derby Network, which is not currently a team in the same way that Team Indigenous and Jewish Roller Derby are, although that’s something that they’re interested in. But as folks that are also diasporic people, that might not necessarily know where their people were from, it’s important for those folks to also be able to find that representation. So we’ve been talking to folks from the Black Roller Derby Network about how they can also create a team. So the definition that we’re looking at creating for the World Cup would embrace that as well.

When is the next World Cup?

It’s most likely in 2022, but we don’t have all the information yet.

So is the goal is to have Jewish Roller Derby compete in that World Cup?

What are you up to in the meantime?

It was incredible! I mean, just being able to play roller derby with a team full of Jews was so cool. And being able to just see it happen after months of planning and fundraising was really cool.

A big piece of Jewish roller derby that I’ve been [thinking about] — and my mom actually said something about this on the phone the other day  — is trying to defy the stereotypes of what a Jewish woman, and especially Jewish women in America, is like. We’re not seen as athletic people. We’re not seen as necessarily strong in this physical way. There’s this kind of “naggy Jewish mom stereotype,” and while I embrace that as part of my identity, [we’re] really pushing back on that. We’re a team of really strong athletic Jews.

It was the first time the team competed. What did you learn from it?

It was the first time most of us had ever met in person. We have folks from all over the United States on our team. We had a practice the night before the tournament where we were just learning each other’s names. We all come from different leagues and different teams, so we have different ways of playing. But, I learned there is just this automatic camaraderie and understanding because of shared background and shared experience.

It was like I had known so many of them for years, even though I met them days beforehand. It was really wonderful. There was a lot of crying, a lot of happy crying.

Did you use any funny Jewish roller derby names?

So on our team most of us actually skated as our Hebrew names.

Which was incredibly empowering and exciting for us! To have a jersey that has my name in Hebrew on the back of it was very exciting. And, as someone that can read and write Hebrew, I offered to help people do that — cause not everyone knew how to write in Hebrew. We also had some Yiddish names in there.

Are there any similarities between Jewish culture and roller derby culture?

They’re both really big on community. Community is so important to roller derby, because it’s a sport, but it’s also this sport that’s for the skater, by the skater. We run our sport. We we make the decisions about the rules and we change the rules when the rules need to be changed. And so many people come to roller derby not because they were athletes and they were looking for a sport, but because they’re humans looking for connection.

Judaism also provides that for a lot of people — the community aspect of it. Not everyone is going to temple because of temple; some people are going because of community. It’s like how we go to summer camps or how we have JCCs; we have these places where we can meet and support each other.

Last summer I broke my ankle, which is a pretty common thing that happens in roller derby. The way my team and my community came to support me — primarily with food which is also a very Jewish thing to do — felt very much like the way people would support a congregation member in a temple if something happened.

What do you want people to know about Jewish Roller Derby?

That we’re out here! And we are not only committed to [being] a presence within roller derby, and bringing up the discussion about other marginalized groups in roller derby, and being in solidarity with them — we’re also here to bring information about what’s happening in the world and in Jewish communities to the roller derby community. We take the ideas of tikkun olam very seriously.

Emily Bureck is an associate editor of Alma.