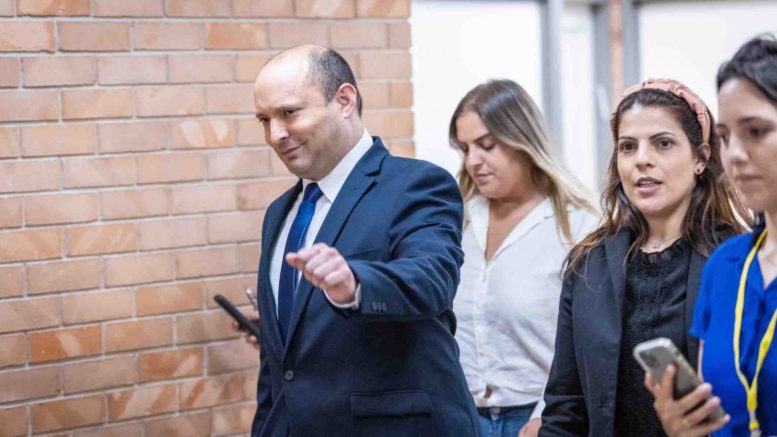 Naftali Bennett on his way to announce in a press conference at the Knesset, the Israeli parliament in Jerusalem, that he will join Yair Lapid's coalition, May 30, 2021. (Yonatan Sindel/Flash90)

(JTA) — Naftali Bennett, the right-wing leader of an ultranationalist party, accepted an offer from centrist Yair Lapid to lead a new Israeli government, which if the agreement holds would oust Benjamin Netanyahu from power after a record 12 years as prime minister.

“I will do whatever I can to establish a national unity government with my friend Yair Lapid, to save the country from chaos and return it to his path,” Bennett said in a press conference Sunday timed for the Israeli TV news hour.

Lapid, who was tasked with forming a governing coalition after Netanyahu failed to in the wake of a fourth stalemate election in two years, has now cobbled together an unlikely coalition of right-wing, centrist and left-wing parties. He also secured the necessary agreement of an Arab Islamist party, Raam, to support the group from outside the coalition.

Together, the group barely passes the 61 seat threshold needed in Israel’s 120-seat Knesset, or parliament. Lapid has until Wednesday to present the coalition to President Reuven Rivlin, and if any party drops out of the agreement before then, the entire coalition will fall apart.

To earn Bennett’s support, Lapid offered him the prime ministership for the first two years and several months of their government’s 4.5 years parliamentary term.

Bennett, a pro-settler hawk and former Netanyahu ally, dallied in joining Lapid because of the optics of joining forces with leftist and Arab parties. At least one of the seven members of his Yamina Party, which opposes a two-state solution, is threatening to leave the party over his pact with Lapid.

But in the end, Bennett said Sunday that he prioritized a functioning unity government to more rounds of elections and politicking. Raam’s position, which allows it to stay technically outside of the majority coalition but support its proposals, likely made the agreement more palatable to all sides.

“We lost a Jewish state 2,000 years ago because of internal arguments, that will not happen again, not on my watch,” Bennett said. “We can stop the insanity and take responsibility. There is no right-wing government. There is a fifth round of elections [in two years] or a government of national unity.”

After the March 23 elections, Netanyahu was given the first shot at forming a coalition. But Rivlin handed Lapid the mandate after Netanyahu failed because Lapid’s party, Yesh Atid, came in second in the elections, with 17 seats to 30 for Netanyahu’s Likud.

Netanyahu, also addressing the media Sunday, said he hoped to attract defectors from the right-wing parties in the Lapid-Bennett coalition, including among the elected Knesset members in Bennett’s Yamina Party, before Lapid and Bennett had a chance to consolidate the coalition.

In that case, Netanyahu said, he would form a fully right-wing government.