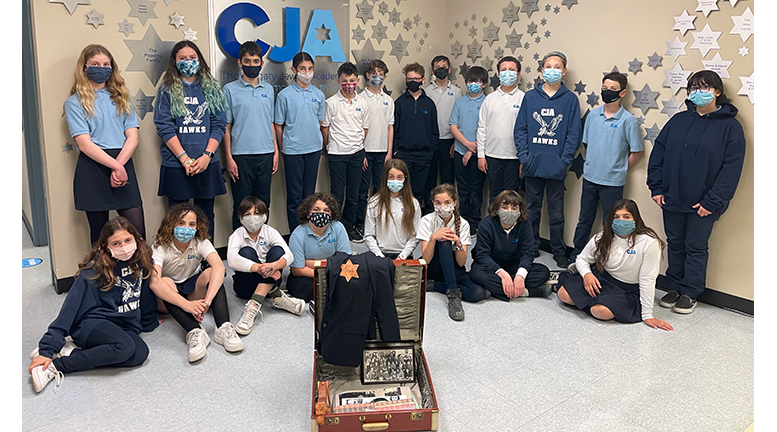 Grade Six students at the CJA participated in an interactive and integrative novel study program that explored Holocaust themes and used both Hebrew and English language skills. (Photo provided).

(AJNews) – Grade six classes at the Calgary Jewish Academy participated in a multi-faceted novel study, exploring stories of the Holocaust using Hebrew language skills as well as English ones. Their process was integrative, interactive, and deeply moving for students and teachers alike.

In Mrs. Morgan’s English Language Arts class, students each chose a novel with a Holocaust theme for an independent study. They read their individual stories, delving into thematic content and writing letters. Next, they brought the letters to Mrs. Baruch’s Hebrew class, and switched languages to further unpack themes and draft translations. 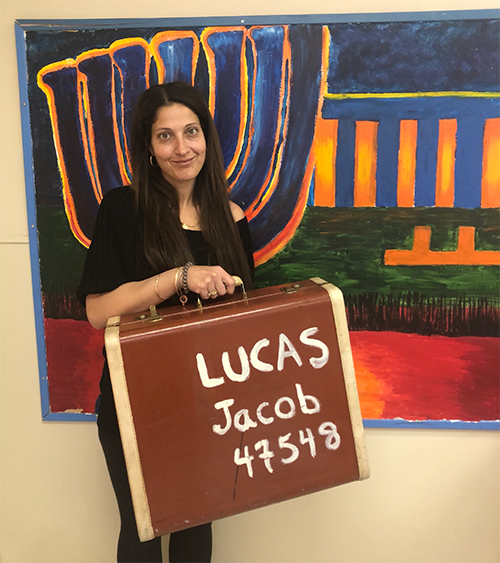 Afterwards, students came together to read Hana’s Suitcase. The story is about a group of Japanese children and a museum director in Tokyo who explore the mysterious circumstances surrounding a Jewish child named Hana Brady, who died in the Holocaust. As students read, Hana’s history emerged more clearly from clues left behind in her suitcase. Her face came into focus and students recognized her as a unique individual among the six million murdered. Studying specific Holocaust stories in this way is important because it reminds us that each human who died was cherished by family, had dreams for their future, and danced in entire universes, just like each of us.

In Hebrew class, students applied their language skills in an authentic and meaningful way by giving presentations on each of the main characters in the novel. They spoke in Hebrew about characters that mattered to them, and a story they connected with. Next, they examined a replica suitcase generously provided to the class by the Holocaust Education and Human Rights Department of the Calgary Jewish Federation. The scuffed leather bag was designed to represent what a child would have left their home with during this time in history. On the front was the name Lucas Jacob and the number 47548; students passed around photos of his family, a much-loved toy, and a jacket with a yellow star stitched into the fabric.

Maya Rzepa (grade 6 student) reflected on the way this anchored her language and novel study. In her words, “Seeing a child’s suitcase just made what we were learning more real and powerful.”

Afterwards, students made their own suitcase boxes, and filled them with items that represented poignant memories. Each box was filled with family photos, handwritten cards and notes from loved ones, and symbolic items. As a scientific community, we know that connecting emotion (personal memories and feelings) and cognition (new concepts and learning) helps the brain with focus, attention, engagement and long-term retention of material. By connecting their own past with the greater arc of history, students also bolstered their ability to draw parallels between themselves and the world at large.

Next, students drew a scene from the novel that they found particularly moving, and wrote a letter to Hana –the main character—in Hebrew. This was important because forming bonds with fictional characters is an important empathy-building exercise. Connecting with characters helps readers develop deeper understanding and compassion through the skill of perspective taking.

In addition, students participated in a program called Memories in a Box, also provided by the Holocaust Education and Human Rights Department of the Calgary Jewish Federation. The interactive virtual program is designed to introduce Calgary’s youth to stories of children their age who experienced the Holocaust. Participants follow the lives and experiences of four separate children, by examining the contents of a virtual suitcase. The items found within tell the stories of children whose Holocaust experiences are as varied as their fates.

To culminate this multi-layered project, students will meet via Zoom with Hana’s niece Lara Brady. Lara is an activist and educator who tells Hana’s story to young people around the world. Together with her father, who escaped the Holocaust by fleeing from Czechoslovakia to Canada, Lara has helped Hana’s story become a bestselling children’s book, a film, a children’s play, a radio documentary and a CBC television feature. Meeting with Lara after reading the novel will be an incredible project capstone, and provide students with a place to unpack their remaining questions and reflections.