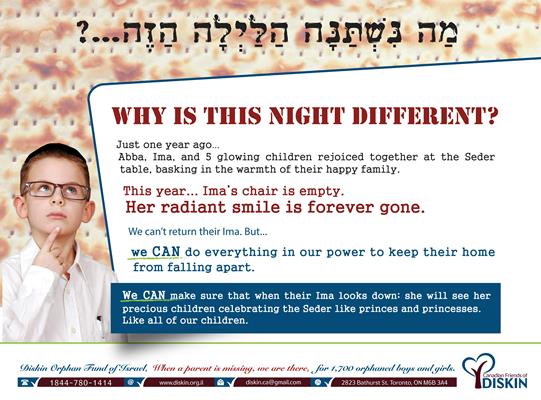 (EJNews) – What rings in the air on Motzai Yom kippur? The sound of the shofar, of course. But almost immediately after that, it is the telephone.

“She’s gone” whispers the raspy voice at the other end of the line.

Leah is gone. No, not as in, gone to shul; she’s gone to a better world. Just one day earlier, her family shared a seudas hamafsekes at her bedside, hoping for a miracle. And now five young children sit down to mourn. Not many people come to pay condolences on the day after Yom Kippur. It’s an overwhelming time of year, those crammed days before Sukkos.

She gets up and shuffles to the kitchen, hoping to find some bread in the freezer.

At the entrance to the kitchen, she startles. Pans of freshly fried schnitzel, piping hot rice, and stir-fried vegetables line the counter. A clear container of thick, fragrant vegetable soup stands beside the pans. Someone has remembered, after all. Leah is not here to make sure her children are fed, but there is someone else in the world that cares.

“Diskin” says the label on the containers.

And Diskin, whoever that is, continues to send. Meals that nourish the body and warm the heart.

“Don’t worry about a thing,” the kind man who delivers the meals assures. “We will take care of all the food for Yom Tov.”

Yom Tov? Who has even thought about Yom Tov? Five young orphans sit on low chairs, barely digesting the fact that their mother will no longer be there to take care of them, that she will never brush their hair in the morning again or sing them to sleep or kiss them goodnight…

But Yom tov is coming and the family needs food. And although no one else has remembered, Diskin has not forgotten.

On Erev Sukkos they rise from their cramped, low chairs, still grappling with shock, struggling to stanch the steady trickle of tears. They stumble about the bare apartment, trying to gather the scattered shards. It is almost Yom Tov. And there is no mother to shout, “Let’s go, kids! Into the bath this minute! Everybody needs to pitch in now!”

Tzippy tries to take the reins. She opens the closet in the children’s room, only to be met by a messy tangle of hangers.

“Riki!” she calls her oldest niece. “Where do you keep your Shabbos clothing?”

“I’m wearing my Shabbos clothes!” Riki protests, pointing to the light colored dress she has been wearing all week since the fateful eve of Yom Kippur. There is a gash at the neckline, pinned crudely with safety pins.

Tzippy’s eyes do a quick scan of the children. Her heart sinks. Each one is wearing his or her single precious Shabbos outfit, slashed by the awful blade of grief; a rip that slices right through the heart.

She has always known that Leah’s family subsisted on a shoestring budget. Leah is – was – a wonderworker at making the pennies stretch. Yet she hadn’t realized it had gone this far. With all the stress of Leah’s illness, no one had thought to take inventory of the children’s wardrobes.

A tingle of desperation crawls up her spine. There are four hours until candle-lighting. And the children have nothing to wear. Nothing. To. Wear. Like the proverbial orphans out of the storybooks. Tzippy tries to smile encouragingly, but her muscles fail her. All she can manage is a stifled sob.

Gila enters the room. One look at the open closet doors tells the entire story.

“I’m calling them,” she declares quietly.

“Diskin. The organization that sent the food.”

“What’s the connection?” Tzippy’s words come out sharp and irritable, a flimsy veneer for her sorrow.

“I don’t know. But they seem so…so tuned in to the family’s needs. I’m sure there is something they can do.”

“Four hours before Yom Tov?” Tzippy’s voice is grim with skepticism. “In the best case scenario, they’ll throw together some old hand-me-downs. We can’t do that to the kids, Gila. They’re not orphans. They’re Leah’s kids.”

Her words unleash a fresh deluge of tears. But Gila looks up the number.

The phone-call to Diskin is made and the race is on.

It is 2 o’clock in the afternoon. Most of the stores are closed. But Diskin will not allow children to enter Yom Tov clothing-less. Volunteers are alerted and cars are dispatched.  At the last minute, one storekeeper is found lowering the shutters on his window and Diskin implores him to reopen.

The storekeeper is gracious. He unbolts the door and flicks open the lights. He waits patiently as the children try on and deliberate and finally decide on their purchases.

The outfits are bought. Now the children need socks and tights and shoes and bows; everything, from the bottom up.

What does a mother do in this case? That’s exactly what Diskin does.

They call friends and relatives and neighbors of storeowners. They beg, cajole, plead and press, with tears and blessings and promises of extra payment. Who can remain indifferent to the plight of orphans who cannot shower for Yom Tov because they do not own a fresh change of Yom Tov clothing?

Kindhearted storeowners melt under the impassioned pleas. They apologize to their families, jump into their cars and speed back to their shops. They wipe the weariness off their faces and smile to young orphans who have lost their mother only four days ago; who have risen from mourning only 2 hours ago; who, after consulting with a rav, are waiting to buy clothing for Yom Tov that is approaching in a mere 3 hours.

And up on High, their mother looks down and smiles. Her precious children are clad like princes and princesses in honor of Yom Tov. She knows that Hashem has not abandoned her family. There is someone worrying for them: angels of mercy by the name of Diskin.

The above scenario, (that occurred this past Sukkos, 5776), captures the essence of the legend called Diskin. It is one tiny heartwarming chapter among hundreds, the story of a fund that is the closest thing to a father or mother for thousands of orphaned children.

And the story has not begun today. For the past 130 years, Diskin has served as a home for Klal Yisrael’s orphans. From the day it was founded by Rav Yehoshua Leib Diskin, zatzal, until today, it has been a source of rescue and support to thousands of orphans and their families.

This year, too, as Pesach approaches, Diskin provides thousands of vouchers to orphaned families so that they can clothe their children in honor of Yom Tov.

Orphans must no longer walk around branded. In the merit of Diskin’s untiring efforts, they can dress with dignity and pride, shopping in the same fashionable stores as their friends do. They can wear quality clothing that not only does something for their image, it does something for their heart; it mends that invisible gash just beneath their necklines and allows it to heal just another little bit.

Does anyone have an inkling of the value of an orphan’s smile on High? Can anyone imagine the rewards Hashem bestows on those who make that smile possible?

In honor of this Pesach, let us be among those who do.  Let us offer a gift of true happiness to an orphaned family. And let us treasure the warranty that comes along with it.

For Hashem, the Father of all orphans, guarantees: “Im atah mesameiach es sheli… b’yamim tovim shenasati lecha, ani mesameach es shelach. If you bring joy to mine… during the yamim Tovim that I gave you, I will bring joy to yours…”  (Midrash Tanchuma, Parashas Re’eh.)