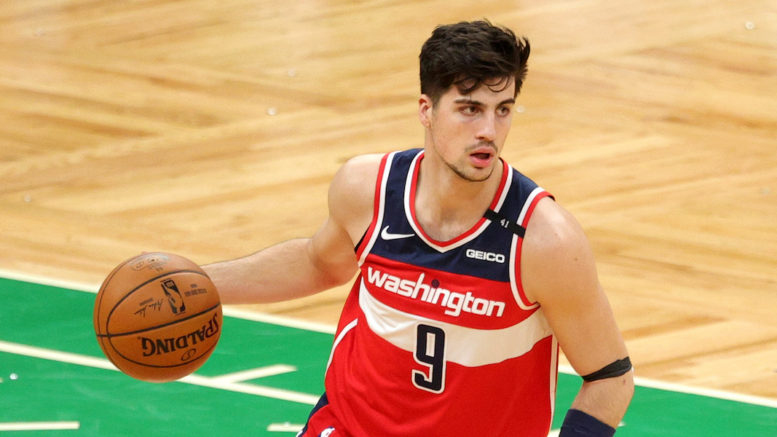 BOSTON, MASSACHUSETTS - JANUARY 08: Deni Avdija #9 of the Washington Wizards dribbles downcourt during the game against the Boston Celtics at TD Garden on January 08, 2021 in Boston, Massachusetts. (Photo by Maddie Meyer/Getty Images)

Late in the second quarter in a home game against the Golden State Warriors, Avdija fell awkwardly on his right ankle, in clear pain. Teammates rushed to cover his ankle with a warmup jersey as they waited for trainers. (There’s a video, but if you’re squeamish, be warned.)

Avdija underwent X-rays, revealing a hairline fracture, but reportedly won’t require surgery. However, he will likely be out for the rest of the season.

In an Instagram story posted last night, the 20-year-old wrote, “Thank u everybody for the prayers and support I’ll be back better and stronger than ever.”

The Wizards selected Avdija with the ninth pick in the 2020 NBA Draft from the Tel Aviv Maccabi club in Israel’s Premier League, and he’s played in 53 games this season — including 31 starts. He averaged 6.3 points and 4.9 rebounds playing about 23 minutes a game.

Avdija missed several games in January due to the league’s COVID-19 health and safety protocols.

“Two things about Deni I love: He cares a lot and he works extremely hard,” Wizards coach Scott Brooks told ESPN. “He has he had an up-and-down year, absolutely. You look at all the great rookies, the MVPs in the league, look at their rookie year, it’s no different. Sometimes, we put too much pressure on these players to be 27-year-olds right away. Deni cares, he works hard, is an outstanding kid and we are lucky to have him on our team. We are going to keep getting him better.”