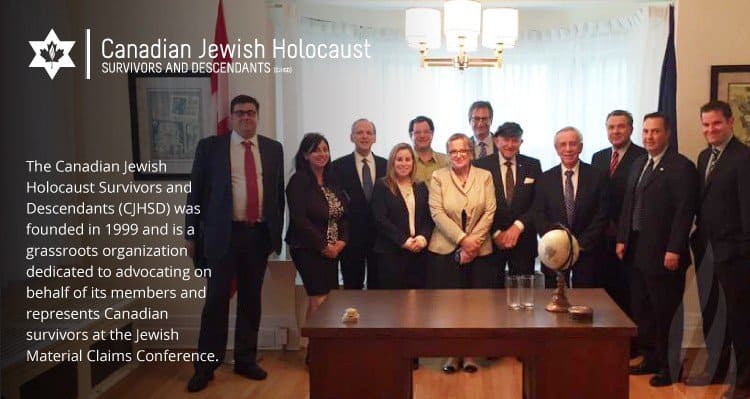 “New programs are created and some existing programs for Holocaust Survivors have expanded,” remarked CIJA CEO Shimon Koffler Fogel. “It is therefore vital that we reach as many of Survivors and Descendants in Canada as possible, so they access all the programs to which they are entitled. As it stands, many Survivors are not yet signed up with us, and this poses many challenges to our collective efforts aimed at restitution and ongoing programs to enhance their quality of life.”

As the Canadian representative to both the Jewish Material Claims Conference and the Holocaust Restitution Committee, CIJA and the CJHSD regularly have important information to transmit to Survivors about programs and are launching a campaign to identify and communicate with as many Canadian Holocaust Survivors and their descendants as possible.

“We believe that our Holocaust Survivor community members deserve recognition for their suffering and should be able to live out their lives with dignity,” stated CJHSD Co-President Pinchas Gutter. “Being represented at the Claims Conference as part of the Survivors and Descendants in Canada is crucial. Our membership drive, for which there is no fee, is aimed at enabling us to relay important information to the Survivors about their rights and initiatives that can enhance their quality of life.”

“Many second- and third-generation Descendants feel a duty to preserve the memory of their families among the six million Jews who were massacred during the Holocaust and to ensure support for the Survivors who suffered so much,” added CJHSD Co-President Edit Kuper. “As we lose first-hand witnesses to the horrors of the Holocaust, we must keep their memories and stories alive. Through this outreach, we hope to develop networks of mutual support and understanding across Canada to reflect the collective concerns of the Canadian Jewish Holocaust community.”

The CJHSD is a grassroots organization dedicated to advocating on behalf of its members and represents Canadian survivors at the Jewish Material Claims Conference. The CJHSD is an independent organization affiliated with CIJA.

The Centre for Israel and Jewish Affairs (CIJA) is the advocacy agent of the Jewish Federations of Canada.