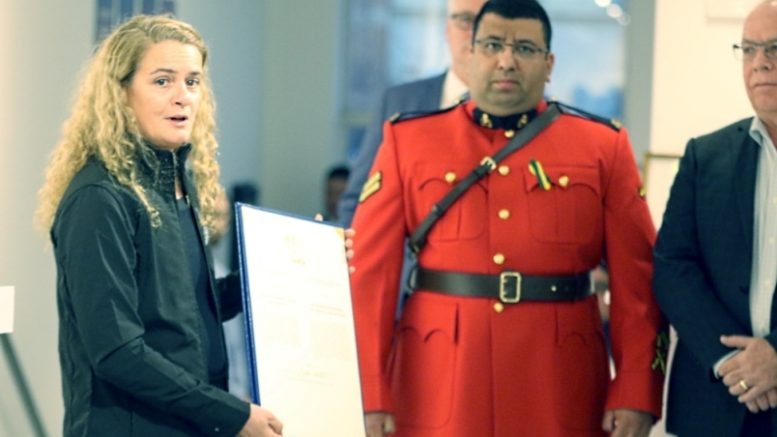 Governor General Julie Payette gives a commendation to Cpl. Mike Benjamin and other first responders who assisted at the scene of the Humboldt Broncos bus accident in April. (Photo by Devon Tasa, Tisdale Recorder)

NORTHEAST — A former member of the Edmonton Jewish community, Cpl. Mike Benjamin, was one of the first responders that came to Humboldt Saskatchewan this month to receive a commendation from the Governor General for his response to the Broncos bus crash.

“During the minutes, hours and days following the tragedy, members of several close-knit community and protective services organizations answered the call and gave freely of their time and resources in support of the victims and their families,” the commendation said. “They’ve demonstrated tremendous courage, dedication and selflessness and are to be commended for their selfless service and generous spirit.”

Governor General Julie Payette presented the commendation at a reception at the Humboldt and District Gallery on Oct. 20, 2018.

“It’s with the thanks and gratefulness of all Canadians that I’m in the position to offer you this outstanding commendation for all of the first responders that helped in the tragedy,” Payette said.

Rob Muench, Humboldt’s mayor, said he was happy to see them there.

“It was nice to see them come here because of what they did for the team on the highway that night. It was good to have them represented.”

Also given a commendation were the citizens of Humboldt for demonstrating solidarity, strength and resilience by offering steady support to the families of the victims.

“This is one of the great privileges of this position, is to be able to recognize the extreme engagement and dedication of the community,” Payette said at the presentation ceremony at the Humboldt and District Gallery.

Muench accepted the commendation on behalf of the citizens.

The Governor General expressed hope that something positive would emerge from the tragedy.

“We can’t go back and redo this. If we could, we would immediately,” she said. “What we can do, though, is build on that memory and make something very good and very positive out of it. I think that’s exactly what’s happening in this community.”

On behalf of the Edmonton Jewish Community, Yasher Koach to all the first responders and particularly to Cpl. Benjamin, an Edmonton Talmud Torah and Menorah Academy alumni.

This article was originally published in The Tisdale Recorder, with text added from Edmonton Jewish News.