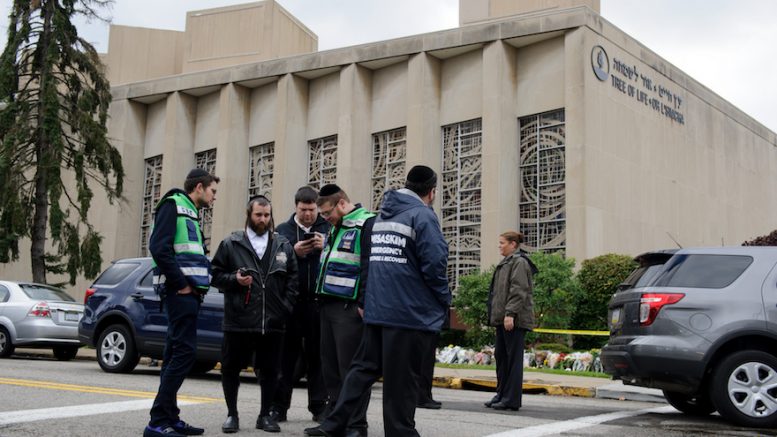 A Jewish emergency crew and police officers at the site of the mass shooting at the Tree Of Life synagogue in Pittsburgh, Oct. 28, 2018. (Jeff Swensen/Getty Images)

(JTA) — The American Jewish Committee is urging Jews — and non-Jews — to come to synagogue this Shabbat in response to the shooting during services Saturday at Pittsburgh’s Tree of Life Synagogue that killed 11 worshippers.

The organization is calling on elected officials, civic leaders and others to join Jews at services as part of the #ShowUpForShabbat campaign.

“What could be a more fitting response to the terror in Pittsburgh?” AJC CEO David Harris said in a statement. “We are not afraid. We are not going to think twice about affirming our identity and faith. We are not alone.”

Representatives of AJC’s 22 offices across the United States are reaching out to communal partners and local government officials to ask them to participate in the #ShowUpForShabbat campaign. Simultaneously, the organization’s 11 international offices are working with partners in over 35 Jewish communities around the globe to launch similar initiatives locally.

Other local, national, and international Jewish organizations are being asked to encourage their members to participate in the campaign. Synagogues are being called on to welcome the anticipated influx of attendees at their Shabbat services with explanatory programming and rabbis are being asked to dedicate their sermons to discussing the initiative. Social media users are being encouraged to tweet and post about their plans to attend Shabbat services this weekend using the hashtag #ShowUpForShabbat.

“The community of conscience must stand as one, whether in the face of the hate-motivated attack against a black church in Charleston, which took nine lives, or a synagogue in Pittsburgh, which took 11 lives,” said Harris. “We are determined to ensure that love triumphs over hate, good over evil, unity over division. That’s our America.”

A range of synagogues, rabbis and Jewish organizations have said they are taking part in the campaign.