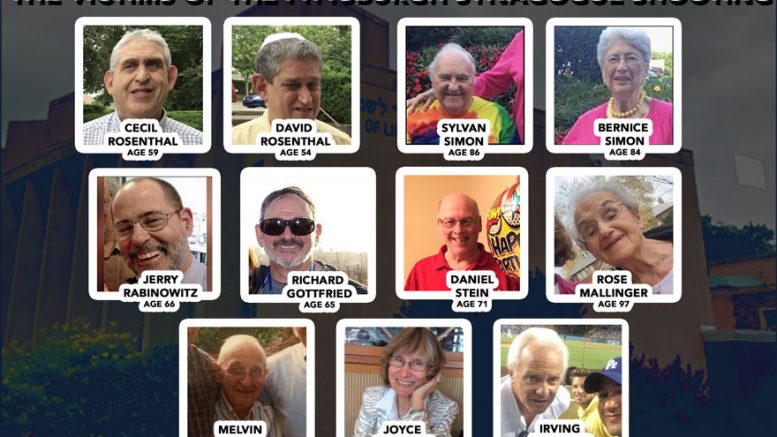 The victims of the Pittsburgh shooting (Facebook/Google Maps/JTA Collage)

(JTA) — The 11 victims of Saturday’s attack on a Pittsburgh synagogue included two brothers with intellectual disabilities, a married couple and a physician who assisted patients in the early days of the AIDS crisis.

The chief medical examiner of Pittsburgh’s Allegheny County released the names Sunday, one day after a gunman opened fire at Tree of Life Congregation, which houses three separate prayer services. In addition to the 11 victims, two congregants and four police officers were injured.

The youngest victim was 54 and the oldest was 97.

Federal officials said in a news conference Sunday that they were treating the shooting as a hate crime. The suspect, Robert Bowers, shouted anti-Semitic statements during the rampage. Shortly before entering the synagogue, Bowers posted a message on his website condemning the Jewish refugee aid group HIAS and said Jews were the devil.

Bowers entered the synagogue at about 9:45 a.m. and began firing. He was stopped 20 minutes later by police as he was exiting the building, and was injured in the exchange of fire when he retreated to the building’s third floor. He had an AR-15 semi-automatic rifle, as well as three handguns. Officials said he appears to have used all of them.

Bowers has been charged with 29 counts by federal officials and was to be arraigned Monday afternoon. The charges include  11 counts of obstruction of exercise of religious beliefs resulting in death — a hate crime — as well as 11 counts of use of a firearm to commit murder during and in relation to a crime of violence.

At a news conference Sunday, federal officials as well as the mayor of Pittsburgh, Bill Peduto, expressed sympathy for the victims’ families and solidarity with the Jewish community of Squirrel Hill, the historically Jewish neighborhood where the shooting took place.

“The Jewish community is the backbone,” Peduto said of the Squirrel Hill neighborhood. “It is part of the fabric of Pittsburgh and we will be there in all communities to help our friends in the Jewish community. We’ve been knocked down before, but we’ve always been able to stand up because we work together.

“We know that we as a society are better than this. We know that hate will never win out.”

Jeff Finkelstein, president and CEO of Pittsburgh’s Jewish federation, at the news conference called it “an awful, awful period for our Jewish community, and especially for the families that have been affected, and it’s real once you hear the names.”

“We’ll be there for them and be there to help our Jewish community and the Pittsburgh region heal from this,” he said.

Peduto also pushed back against a statement by President Donald Trump that an armed guard could have prevented the carnage at the synagogue. The mayor said that instead of arming more people, the focus should be on stopping irrational hatred and removing guns from the hands of those who seek to do harm.

“We shouldn’t be trying to find ways to minimize the dangers that occur from irrational behavior,” he said. “We should be working to eliminate irrational behavior and the empowerment of people who would seek to cause this type of carnage from continuing. The approach we need to be looking at is how we take the guns, which is the common denominator of every mass shooting in America, out of the hands of those who are looking to express hatred through murder.”

Below is some information on the victims of the shooting, as announced by Karl Williams, the chief medical examiner of Allegheny County.

The two brothers were very involved in the local Jewish community.

“Neither man had one ounce of hate in their hearts,” read a tweet by a synagogue member. “I grieve for these men. They will be missed.”

The brothers lived in a community home run by ACHIEVA,which provides residential and employment services for adults with intellectual disabilities. They were roommates often were the first faces that congregants saw as they arrived for services.

“They loved life. They loved their community,” said Chris Schopf, vice president of Residential Supports at ACHIEVA. “They spent a lot of time at the Tree of Life, never missing a Saturday. If they were here, they would tell you that is where they were supposed to be.”

The Simons were married at the Tree of Life Congregation in 1956 in a candlelight ceremony, the Pittsburgh Tribune-Review reported.

“They held hands and they always smiled and he would open the door for her, all those things that you want from another person,” neighbor Heather Graham told the newspaper. “They were really generous and nice to everybody. It’s just horrific.”

Sylvan was a retired accountant. Bernice was a former nurse.

Stein once served as president of the New Light Congregation, one of the three congregations that were housed in the synagogue building, the Pittsburgh Tribune-Review reported. He recently became a grandfather for the first time, according to local reports.

“He was always willing to help anybody,” said his nephew, Steven Halle. “He was somebody that everybody liked, very dry sense of humor and recently had a grandson who loved him.”

His wife, Sharyn, is the vice chair of membership of the local chapter of Hadassah.

Rabinowitz was a physician and was involved in the Reconstructionist congregation, Dor Hadash, that met in the building, at one time serving as its president.

“Jerry was one of the backbones of the congregation,” Laura Horowitz, a congregant, who wept when she read his name, told JTA. “He blows — he blew — the shofar on Yom Kippur.”

A former patient recalled that in the early days of the AIDS crisis, Rabinowitz was among a handful of doctors treating patients with dignity and respect.

“Basically before there was effective treatment for fighting HIV itself, he was known in the community for keeping us alive the longest,” Michael Kerr recalled on Facebook. “He often held our hands (without rubber gloves) and always always hugged us as we left his office.”

A popular local dentist, Gottfried was active in New Light Congregation. The Tribune-Review reported that Richard and his wife, Margaret Durachko, volunteered with the Catholic Charities Free Dental Clinic.

“Today I lost an important person in my life,” Jacob Gottfried wrote. “My uncle was murdered doing what he loved, praying to G-D. I don’t want to live in a world where I must fear to live as a Jew. I thank everyone in BBYO for being so supportive and I hope this never happens again! #PittsburghStrong.”

Fienberg was a native of Toronto, Canada, and lived in several American cities before settling in Pittsburgh, where her husband, Stephen, was professor emeritus at Carnegie Mellon University before his death in December 2016, Toronto City News reported. She retired in 2008 as a researcher at the University of Pittsburgh’s Learning Research and Development Center, which looks at learning in the classroom and in museums. Her daughter-in-law, Marney Fienberg, is co-president of Hadassah North Virginia.

Though many news reports circulated that Rose Mallinger was a Holocaust survivor, a family friend tweeted that she was not. Mallinger’s great-niece told her friend that her aunt was “the most caring gentle loving woman.” The retired school secretary had children and three grandchildren. Her daughter, Andrea Wedner, 61, was among those wounded in the attack and is expected to recover, the Post-Gazette reported.

“She was a synagogue-goer, and not everybody is,” a former Tree of Life rabbi, Chuck Diamond, told The Washington Post about Mallinger. “She’s gone to the synagogue for a lifetime, no matter how many people are there. I feel a part of me died in that building.”

Wax, a retired accountant and a grandfather, was described by fellow congregants as a “pillar” of the congregation, The Associated Press reported. He was a leader of Or Chadash, or New Light Congregation, which moved into the Tree of Life building a year ago after his congregation, made up mostly older members, could no longer afford its own synagogue building. He reportedly was leading his congregation’s services at the time of the attack.

Myron Snider, chairman of the congregation’s cemetery committee, described his friend as generous and kind. Snider said he and Wax shared mostly clean jokes at the end of each service.

Dennis Fishman, whose parents were friends with Wax, described him as empathetic and attentive.

“He was a quiet man, not very assertive but always there, often smiling,” Fishman said. “He had a real light-up-the-room kind of smile, with an eye that let you know he was paying attention to what made you happy and made you sad.”

Younger was a father and grandfather who had recently undergone surgery, his neighbor told the Post-Gazette.

“He was a really nice guy,” Jonathan Voye told the newspaper.

The Tribune-Review reported that Younger once owned a small business and was a youth baseball coach.

Among the injured, Daniel Leger, 70, a retired nurse and local hospital chaplain, suffered critical injuries in his chest, his brother, Paul, told the Tribune-Review. Leger had two surgeries on Saturday and remains in critical condition, according to reports. Leger, who has a wife and two sons, was scheduled to lead a service Saturday morning at Tree of Life.