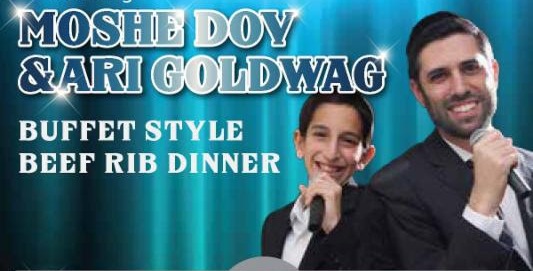 (EJNews) – The EDGE is presenting a wonderful evening of food and entertainment at the tenth annual Rock ‘N Ribs celebration on February 21, 2016 at 5:30 pm at the Fantasyland Hotel. The evening features their succulent buffet style Beef Rib kosher dinner which is always an enticing draw for the community. The tenth anniversary event stars Moshe Dov and Ari Goldwag who are guaranteed to delight and entertain the Edmonton crowd. 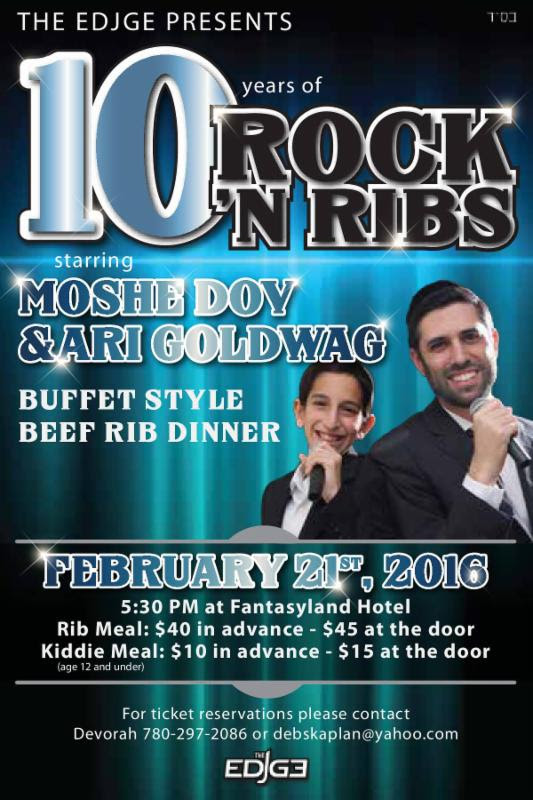 Rabbi Ari Goldwag is a prolific writer, lecturer and musician who lives in Ramat Beit Shemesh, Israel.   Born in New York in 1979, he is an American-born Orthodox Jewish singer, songwriter, composer, and producer of contemporary Jewish religious music. He achieved fame as a soloist for the Miami Boys Choir at age 10 and starred on five albums and three videos before his voice changed at age 14. Rabbi Goldwag launched a successful music career after his marriage and move to Israel. He has released five solo albums, and composes songs and produces albums for other artists. His popular albums include:  The English Album, A Cappella Soul, Shabbos Get Ready, Lishuascha Kivinu, Simcha B’libi.

Rabbi Goldwag appears in music videos to promote his singles, including “Hashem Loves You” and “Am Echad” (One Nation). For the latter video, he played five different denominations of Jews in Israel – Haredi, Hasidic, Breslov, Religious Zionist, and secular, shaving off his beard for the latter two roles.

His son, Moshe Dov Goldwag also performs in his songs and videos.

Rabbi Goldwag relates most to the deeper ideas of the Torah, contained in the works of such great rabbis as Rabbi Aryeh Kaplan and Rabbi Akiva Tatz, and tries to use their inspiration, among many others, to inspire his listeners. In addition to his music, he is a prolific writer and lecturer on Torah topics. He has recorded hundreds of podcasts on the weekly Torah portion. His podcasts have a very nice listenership, sometimes garnering over five hundred downloads a week on the Parsha Podcast, and over a hundred downloads a day on the Kabballah podcasts.

Be the first to comment on "Come join the tenth annual Rock N’ Ribs celebration: Feb. 21 at Fantasyland"