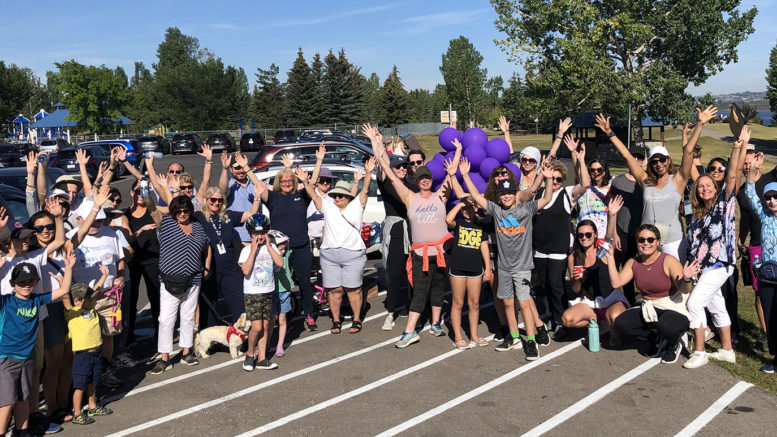 On August 15 and 16, Calgary CHW sponsored a walk at South Glenmore Park as part of the SOS Campaign to support victims of domestic violence. Photo by Irena Karshenbaum.

(AJNews) – Supporters of Canadian Hadassah-WIZO (CHW) walked with a purpose on August 15 and 16 — to support women and children who are victims of domestic violence in Canada and Israel.

About 160 people attended the two days of the walk, contributing to the National CHW campaign which raised over $450,000 to empower victims of domestic violence.

Meeting at South Glenmore Park, attendees, including men, women, children and pets, walked together with purple balloons — the “colour for this cause,” said Dorothy Hanson, president of the CHW’s Calgary Chapter — while she stayed back at a table with water, coffee, muffins and other treats.

Some people approached the table to ask what was going on and when Hanson told them they handed her money to support the cause.

“It was a great community event. There were Jewish people and non-Jewish people,” she said.

The walk is part of CHW’s Starting Over Safely (SOS) summer campaign, which began last year specifically to support victims of domestic violence.

Hanson said the pandemic highlighted the importance of assisting those fleeing domestic abuse, which has been called the “shadow pandemic” because of a shroud of silence that surrounds it as a result of stigma.

“One of the many unfortunate things that happened during COVID was the fact that women and children were stuck at home with their abusers, so domestic abuse rose sharply during COVID,” she said.

“In my mind, it is more important than ever to shine light on this shadow pandemic and make sure people realize that it is still out there and more prevalent than ever, and that we need to help women.”

But it isn’t just for women. Men can also be victims of domestic violence, Hanson added.

New this year, funds also went towards the Michal Sela Forum, which provides guard dogs for domestic abuse survivors — the first program of its kind in Israel — which is named after founder Lili Ben Ami’s sister, who was murdered by her spouse in 2019.

In another first for this year, money also went towards assisting domestic abuse survivors in Canada via Calgary-based Franny’s Fund, which helps survivors navigate the local legal and social support systems.

Franny’s Fund founder Rebecca Snukal, who’s chairing the SOS campaign this year, told AJNews she suggested some of the campaign’s proceeds go towards helping survivors in Canada, in addition to Israel.

The goal is to open Franny’s Fund locations in other cities where CHW has a presence — Toronto, Vancouver, Montreal and Ottawa.

At the walk, Snukal delivered an impassioned speech “about how people of good heart and strong conviction have used walks and marches to focus attention on important goals throughout history,” she said, referring to the women’s suffrage and civil rights movements.

She also quoted a passage from Henry David Thoreau’s 1862 essay, “Walking,” which deals with the spiritual value of walks.

“We had a really great head start with our walk,” said Hanson.

A 27-hour crowdfunding campaign dubbed “Matching Heroes” was held on Aug. 23, with the eponymous heroes chipping in funds to quadruple the amount of money raised that day.