(AJNews) – “Captivated” does not adequately convey the viewer’s reaction to the haunting images forever pulled out from the sequence of time and space. “Arresting” does not sufficiently express the feeling of foreboding while watching a sea of smiling faces knowing their fate to come in just a matter of years. And “excruciating” cannot properly describe the emotions conjured by the knowledge that the vibrant community bustling on screen is now a relic of history. Of the 4,500 residents of Nasielsk, a town northwest of Warsaw, approximately 3,000 inhabitants were Jews. Of those 3,000, fewer than 100 survived the Holocaust. 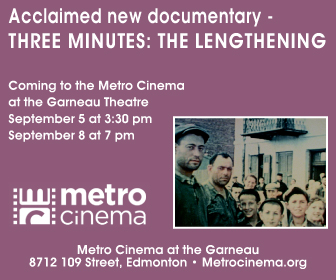 Three Minutes: A Lengthening, directed by Bianca Stigter, is a fascinating mix of a vacation home-movie, investigative historical documentary, and comprehensive film-essay. Even for those that have prolifically viewed documentaries dealing with the Holocaust, this cinematic innovation is a heavy experience. When Glenn Kurtz discovered his grandfather, David Kurtz’, 1938 film footage from his trip to Poland, he could not have imagined the journey it would ultimately take him on. Three Minutes: A Lengthening is a 69-minute chronicling of that journey.

Three Minutes: A Lengthening is true to its title. David Kurtz’ home-movie contains approximately three minutes of silent everyday images shot in his hometown of Nasielsk. Some of the images are in colour, and as the documentary explains, the red tones and hues are most vibrant despite the passage of time because they degrade more slowly. The inhabitants immortalized on the film are “taken out of the flow of time” as narrator Helena Bonham Carter puts it. Street scenes depict bouncing children with bright beaming smiles excited to see a video camera up close and to be recorded on film. People pour out of the town’s synagogue with its identifying Lion of Judah on only one of its large double doors.  Flickering images of a café with dramatic floral wallpaper testify that there was once joy and celebration in this town that would suffer utter devastation in the coming years. Thursday, August 4, 1938, was likely not a remarkable day, other than the visit of David Kurtz, his wife, and their friends the Molinas.

The Kurtzes immigrated to the United States from Poland as children in the 1890s and established a successful business in New York; David Kurtz’ return to Nasielsk was a voyage that Glenn Kurtz refers to in the documentary as “the Grand Tour,” an opportunity to revisit one’s origins, ‘the old country,’ following resettlement. David Kurtz, after a more holiday-like stay in Western Europe, would have no doubt arrived in Nasielsk ready to bestow exotic gifts from afar upon friends and family he had left behind – a demonstration of his prosperity in America. A testament to his accomplishments in the ‘new world,’ his 16mm Polaroid video camera. “The appearance of an American, in particular an American with a home-movie-camera, was a major event in the life of the town.  Everyone turned out to see them, in particular, the children,” commented Glen Kurtz in his Tedx lecture at Bergen Community College.

The resulting footage would lie untouched until 2009 and suffer significant decay.  Through the efforts of the United States Holocaust Memorial Museum, David Kurtz’ three minutes of film were painstakingly restored. “There’s no intrinsic difference between junk and information – no inherent difference between travel film and historical film. The difference is created by time, by timing, by context, and by the stories we’re able to tell to link together the pieces that remain,” elaborated Glenn Kurtz in his lecture.

As the film’s narrator so correctly explains, the film “preserves detail without necessarily conveying knowledge.” Stigter’s documentary details Glenn Kurtz’ search for that knowledge behind his grandfather’s three minutes of vacation footage – the only remnant of the 3,000 strong Jewish population of pre-War Nasielsk. “My grandfather’s film hadn’t changed at all – what changed was the world around it,” said Glenn Kurtz in the final comments of his Tedx talk.

With the help of the United States Holocaust Memorial Museum, Glenn Kurtz would eventually find a man named Maurice Chandler, one of only a few Holocaust survivors from Nasielsk. Chandler was identified as one of the children smiling jubilantly in the film by his granddaughter. When he himself viewed the footage, he recognized his younger self immediately. Although he could not remember the moment singularly, Chandler helped piece together some of the context captured by David Kurtz in 1938. Chandler was particularly detailed in his discussion of the hats worn by the people in the movie as they indicated who attended religious school and who did not.

Captured in the documentary, Chandler recognizes some faces from the crowd and talks about the strict observance of halacha by most of the Jewish people in town.  Chandler survived the war with forged papers, and ultimately settled in the United States going on to have children, grandchildren, and great-grandchildren – through him the legacy of Nasielsk lives on.

Following the invasion of Poland on September 1, 1939, it took only a few short days before Nasielsk was under Nazi occupation. According to testimony preserved by Oyneg Shabbos, now housed at the Ringelblum Archive in Warsaw, the inhabitants of Nasielsk were rounded up in December of 1939, brutally beaten, and deported. Most would meet a tragic end in the gas chambers of Treblinka.

Chilling though it is to watch Three Minutes: A Lengthening knowing what would soon come to pass, the film is a brilliant innovation in cinematic historical preservation. Glenn Kurtz’ efforts demonstrate how three brief minutes can unlock stories otherwise lost to the vastness of time. Efforts were exhaustive, but what has resulted gives some voice to the Jews of Nasielsk who were forcibly silenced more than 80 years ago.

The film will be screened at the Metro Cinema on September 5 at 3:30 pm  and September 8 at 7 pm.  Tickets are available online.

Be the first to comment on "Life in Poland before the Holocaust is captured in fascinating film – at Metro Cinema Sept. 5 and 8"