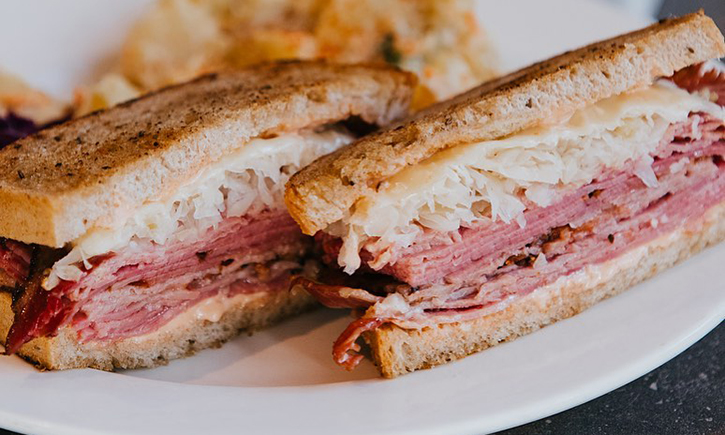 Grumans Catering and Delicatessen in Calgary is meeting the challenges of COVID-19 with determination. For the time being, customers can get their "smoked meat fix" by pickup or delivery and they can look forward to dining in house as soon as possible.

(AJNews) – Calgary’s Grumans Delicatessen has so far been able to weather the COVID-19 storm, which has affected both its locations in different ways, necessitating a two-store solution for the restaurant.

The deli’s downtown location is owned and operated by Peter Freiberg, while the Brittania location is run by his sister, Gail.

Peter Freiberg says his location does a lot of catering for large events and has many people who work downtown stop by for lunch. Both of course evaporated immediately after the initial lockdown was imposed in mid-March.

This, he said, lead to a massive reduction in staffing at the pandemic’s outset.

“When your sales get cut in half, you’ve got to cut your costs in half, so right out the gate we went from 20 employees down to three, and we slowly built up the delicatessen side of things as far as takeout goes,” said Peter.

They also got “more aggressive” with Skip the Dishes and DoorDash, even though those food apps take a 25% cut of commission on deliveries, he said.

“Really what it’s about is keeping the wheels turning, keeping the lights on, keeping people employed and keeping the Grumans name out there,” Peter said, adding that he increased prices a bit on app, offering customers a discount if they come and pick up their orders.

The location’s landlord has been very understanding with regards to the deli’s reduced capacity to pay its rent, Peter added.

The Canada Emergency Wage Subsidy was also helpful in allowing Grumans to bring back seven of its downtown staff, bringing it up to half of what it was pre-COVID.

“We did have some catering over the summer. (It) didn’t completely disappear, but it’s pretty well gone as far as the corporate lunches we used to do, and the breakfasts and the corporate meetings,” Peter said.

In the summer, restaurants were able to return to indoor dining, which naturally required a heightened focus on cleanliness and enforcing physical distancing measures.

“My job all of a sudden became making sure everybody was safe, whether it was my staff or my customers, and we did everything we needed to do as far as sanitizing goes and keeping the people separated … putting up the barriers between our booths,” said Peter. “Slowly but surely our customer base came back.”

As COVID numbers began to increase, they of course had to close in-house dining again.

That said, he acknowledges the immense difficulty of planning for the future at this time.

The Brittania location on Calgary’s south side has more of a traditional take-out set up, explains Gail. It’s also newer, having opened three years ago.

“We’re in a residential neighbourhood, so we’re not as dependent on people working downtown coming in for lunch or the corporate catering,” says Gail.

“We get a lot of people who live in the neighbourhood, or different parts of the city, that come to us for take-out, so we were still able to do a lot of take-out with our stuff in the deli.”

She says the Brittania location is more convenient for many members of the Jewish community who want traditional Jewish food.

It was a smoother transition from pre-COVID practices at the Britannia location than downtown, as they only had to shut down the restaurant while take-out continued as normal.

“If people are having their smoked meat fix, they’ll just get it to go, instead of eating it in the restaurant,” said Gail.

This isn’t an ideal situation for a restaurant to be in, but it leaves the Britannia location well-positioned for a return to normalcy once COVID numbers are down.

“They’re not able to sit down and enjoy a meal at a table inside the restaurant. It’s certainly not the same,” said Gail. “There’s definitely some people who haven’t been able to come or haven’t been coming, but hopefully they’ll be able to come back when things get normal again.”