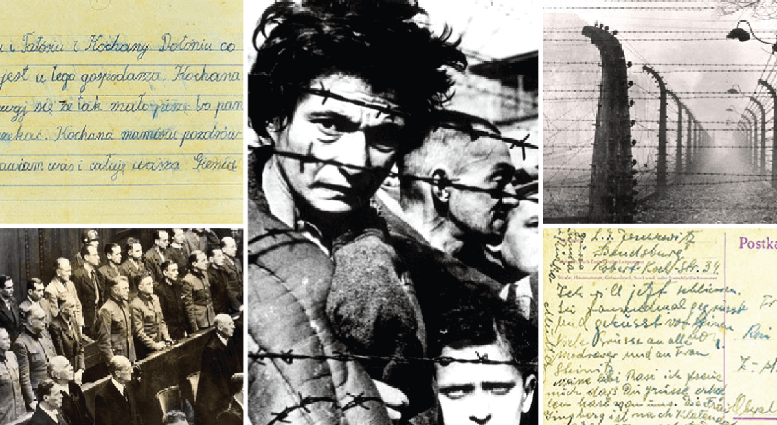 The Calgary Public Library is offering Yad Vashem virtual Holocaust education programs for teens. 'Lost Letters' will be held on May 30 and 'How was it Humanly Possible' will be held on June 6.

(AJNews) – Calgary is experiencing a renaissance in Holocaust education despite challenges posed by COVID-19. Calgary Jewish Federation is even exporting its expertise to other cities and towns thanks to the efforts of Holocaust Remembrance and Human Rights Education co-chairs Marnie Bondar and Dahlia Libin.

While the pandemic once again prevented the assembly of thousands of students and teachers for the 37th annual Holocaust Education Symposium, more than 4,000 Calgary and Lethbridge students, and 450 from Edmonton, had a meaningful and engaging online experience with all the components of the symposium traditionally hosted by Mount Royal University during the first week in May.

Libin and Bondar are looking to reach even more high school students in Calgary and beyond by adding a fall semester virtual symposium beginning this year.

“Many schools operate on a semester system. We want to make sure that kids who study social studies at the beginning of each school year have the same access to Holocaust education as their peers who join us each spring,” Libin said.

Another initiative, prompted by a Lethbridge citizen, has garnered Calgary Jewish Federation’s participation and support. Already using a Facebook page to create Holocaust awareness and speak out against antisemitism, the non-Jewish man contacted Libin and Bondar for additional information and resources. They teamed up in a virtual Holocaust education symposium for adults last month. A Calgary historian provided context, participants viewed the movie Path to Nazi Genocide, and a child survivor of the Holocaust, Calgarian Ann Dancyger, shared her testimony for the online event.

Bondar and Libin are ramping up efforts to reach out to Alberta cities and towns where it is less likely for citizens to know Jewish people and to have access to quality Holocaust resources and programs.

“Our friends at the Jewish Federation of Edmonton are working on this kind of outreach too,” said Bondar, adding that both communities are supporting second and third generation (2G and 3G) speakers to share their parents’ and grandparents’ Holocaust testimonies.

Other synergies have brought Holocaust education to greater prominence in the community at large, including Calgary Jewish Federation’s highly successful partnership with the Calgary Public Library (CPL) which was launched with the library’s presentation of a virtual talk by renowned historian Deborah Lipstadt on January 27, International Holocaust Remembrance Day. An estimated 1,500 individuals attended.

Subsequent CPL-sponsored events included an April 1 talk by Dr. David Fishman, author of The Book Smugglers: Partisans, Poets, and the Race to Save Jewish Treasures from the Nazis. Of the estimated 150 individuals who attended the live virtual event, some 60% registered through CPL, indicating significant interest beyond the Jewish community.

Other well-received CPL-sponsored programs included the survivor testimonies of Fanny Wedro and Ann Dancyger on April 18 and May 2 respectively to audiences of approximately 125. Wedro survived what is sometimes referred to as the “hidden Holocaust” or the “Holocaust by bullets.” She was the sole survivor of her family.

Dancyger was only two years old – and strapped to her mother’s back – when the Nazis rounded up Jews hidden in Ratno, marched them to a field and ordered them to dig their own graves. Fortuitously, a fog rolled in and Dancyger’s mother crawled to safety in the woods. Mother and daughter heard the shots as the massacre unfolded behind them. The only survivors from their family, Ann and her mother managed to survive the rest of the Shoah in hiding.

Calgary Jewish Federation brought a unique virtual program to an Israeli Scout group in Toronto on April 4. Speaker Don Shapira, who was born in Israel and raised in Red Deer and Calgary, spoke in Hebrew to Scouts in grades three through eight. His presentation focused on the antisemitism he experienced while growing up in Canada and his grandfather’s experiences during the Shoah when he was forced into slave labour in Romania. Shapira’s empowering talk is geared toward helping kids learn how to speak up during times of adversity, said Bondar and Libin, adding that they will continue to tap Shapira’s expertise as they support 2G and 3G volunteers in sharing their parents’ and grandparents’ stories.

Bondar shared her late grandmother Freda Plucer’s story at an April 7 virtual presentation to 65 students at Calgary French and International School Students from Calgary, Peru, Romania, Colombia and the United States. Participants viewed Bondar’s pre-recorded presentation and then engaged with her in a live Q and A session. Similar sessions took place on April 8 – Yom Hashoah – when Bondar spoke to Israeli Scouts in Toronto and on April 21st when she addressed students at Ecole Secondaire Highwood High School.

Calgary Jewish Federation teamed up with Winnipeg March of the Living and Jewish Federation of Edmonton on April 7 for a virtual talk by author Judy Batalion on her newly-released book The Light of Days: The Untold Story of Women Resistance Fighters in Hitler’s Ghettos.

For a second consecutive year, Calgary Jewish Federation’s Yom Hashoah commemoration was held virtually. The April 8 event included prayers and readings at the Holocaust Memorial adjacent to the Calgary JCC followed by the program Surviving the Holocaust: The Return to Life in the Displaced Persons Camps, featuring images of survivors who subsequently settled in Calgary. The YouTube presentation has been viewed more than 700 times.

The Jewish Federation of Edmonton produced a very different but equally compelling virtual Yom Hashoah commemoration in conjunction with Reel Mensch Studio. Alberta Minister of Culture Leela Aheer began the evening by reading the proclamation of Holocaust Memorial Day and Genocide Remembrance Act unanimously passed by the Alberta Legislature in 2000. In keeping with Holocaust Education Chair Colin Muscat’s observation that “Every story of Holocaust survival is a miracle, and every descendant of a survivor is truly a gift,” the Yom Hashoah program focused on COVID-era Zoom conversations of Holocaust survivors Clara Kagan, Ann Davis and Helen Markovich with their children, grandchildren and – in Kagan’s case – a boisterous great-granddaughter.

“You can’t really learn about the Holocaust from a book,” said Leon Kagan, quoting his late father, Paul. Kagan and his children spoke of their dedication to sharing their father and grandfather’s story, a bittersweet passing of the torch.

Since Yom Hashoah, Holocaust education programs have continued to abound.  Calgary Jewish Academy recently piloted an interactive virtual program led by experts at Yad Vashem – Israel’s Holocaust museum in Jerusalem.  Grade six students explored the lives of four Jewish children by unpacking virtual suitcases that provided insight into their lives prior to and during the Holocaust.

West Island College (WIC) students participated in an interactive Yad Vashem program on May 12 during which they explored “Last Letters” of individuals murdered during the Holocaust, including handwritten letter and postcards and even desperate last words carved into the walls of hiding places.

“The exploration vivifies and humanizes those who fell victim to the Nazis,” Dahlia Libin said.

“The experience was outstanding,” commented John Davidson, Learning Leader of Social Studies and Director of Student Leadership at WIC.

“The guide was excellent and the letters were very moving. I would highly recommend it as a way to ‘put a face’ to those affected and personalize the plight of the victims,” Davidson said.

Similar Yad Vashem programs will soon be offered by the Calgary Public Library to teens between the ages of 15 and 18. On May 23, CPL will offer a virtual tour of Yad Vashem. On May 30, teens participating in Lost Letters will explore postcards and letters from the Yad Vashem archives, revealing the inner worlds and fates of several Jews who perished during the Holocaust.

A third virtual CPL program for teens, How was it Humanly Possible, will take place on Sunday, June 6. This interactive program explores how human choices and actions led to the murder of six million Jews and millions of others during World War II, emphasizing the roles played by both perpetrators’ and bystanders.

Given recent and alarming escalations of violence in Israel and Gaza, Marnie Bondar and Dahlia Libin are amazed at the resilience and resolve of staff at Yad Vashem who have continued with previously scheduled virtual events despite the growing threat from Hamas bombs and increasing violence in the streets of Jerusalem.

“We often speak about the intergenerational trauma caused by the Holocaust,” mused Bondar. “This is the flip side. Our friends at Yad Vashem once again demonstrated the resiliency of the Jewish people.  This is extraordinary.”

The sentiment was echoed by WIC teacher John Davidson who called the Yad Vashem program “truly amazing . . . most notably when coupled with the events that are occurring in both Jerusalem and Tel Aviv at the moment.”

Bondar and Libin continue to develop long-term relationships with educators like Davidson.

While such partnerships have always been important, they seem even more urgent at a time when Israel is once again in the headlines. The abundance of misinformation – especially on social media – is often fueled by the world’s oldest hatred: antisemitism.

“I learned that friendly people can turn into hateful individuals with enough exposure to propaganda,” commented one teacher following Calgary’s virtual Holocaust Symposium.

A testament to the impact of Holocaust education can be found in the words of a student participant at Symposium 2021:

“I learned to always do my own research, it is important to never rely on one news outlet.  It is important to value diversity and learn from the mistakes of the past. I have a newfound empathy towards people who have faced adversity. Further, it has encouraged me to inform others of what I have learned.”

For more information on the work of the Holocaust and Human Rights Remembrance and Education Department, go to www.jewishcalgary.org/our-community/federation-programs/holocaust-and-human-rights-remembrance-and-education.

Teens with CPL cards can register for upcoming Holocaust programs online or by calling the CPL at 403-260-2600. To register for your free library card, go to https://reg.calgarylibrary.ca/