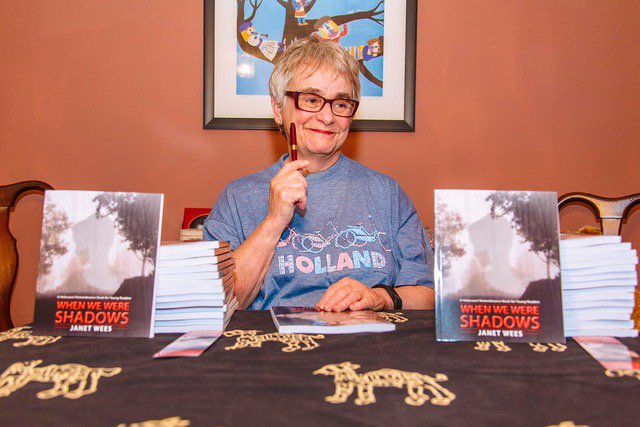 Author Janet Wees at the book launch of "When We Were Shadows" - a fascinating read about one boy's fight for survival hiding in the Dutch forests during WWII. Recommended for ages 9 and up.

(EJNews) – What does it mean when someone Jewish says they survived World War II by hiding in the forest? Author Janet Wees answers this question with a gripping account of one small boy’s fight for survival in Germany and the Netherlands as he and his family move several times to stay one step ahead of the Nazis during the war years.

“When We Were Shadows,” the newest book in the Second Story Press Holocaust Remembrance Series for Young Readers tells the story of Walter, a young child whose parents decide to leave their home in Germany and start a new life in the Netherlands. As Jews, they know they are not safe under the Nazi regime. From one day to the next, Walter’s world goes from safe and predictable to full of uncertainty. Walter is at first too young to appreciate the danger that he is in, and everything seems like a great adventure. But as the years pass and the war progresses, his family is forced to move again and again, from city to countryside to, eventually, a hidden village deep in the Dutch woods.

As the danger of being discovered increases, they are forced to rely on strangers for their safety. Walter’s eyes are opened to the threat that surrounds them every day, and to the network of people who are risking their lives to help them stay hidden. Told through a combination of narrative and Walter’s letters to his grandmother and, later, his granddaughter, the book – based on a true story – shines a light on this part of WWII history and the heroes of the Dutch resistance, particularly those involved in the hidden village. Without their protection, Walter, his family, and hundreds of others would not have survived.

“When We Were Shadows” is a beautifully written book that tells an important story of survival through the eyes of a child from 1937 to 1945. Walter’s letters give the reader a vivid and microscopic look as he tries to make sense of his own war experience. The detailed description is fascinating and helps the reader comprehend what it was like to live in constant fear of being discovered, to run at a moment’s notice and to experience nightmarish realities like being chased through the forest amidst a shower of gunshots.  It is a story of survival that demonstrates the power of family and the camaraderie of a group of strangers who built an incredible community village deep in the woods. It provides insight into the courageous members of the underground who risked their own lives to help the Jewish people survive the brutality of the Nazis. It is a story about the kindness of strangers and the eventual triumph of good over evil.

Author Janet Weeks is a retired teacher who lives in Calgary. In an interview, she explains how she came to write the book. She said, “When I visited the memorial site of The Hidden Village in Vierhouten in the mid-2000s, it affected me more than other sites I’d seen; it gave me a lump in my throat and in my gut, and a desire to find out more. I looked for information and was put in touch with people who knew the history and could talk to me. The last time I visited the site in 2008, I had just interviewed the person whose experiences inspired the novel, and I sat inside the replica huts trying to imagine how he felt as a young boy, remembering what I’d heard from him. As a former teacher, I also knew that my students’ highly developed sensitivities would allow them to identify with the boy and understand why what happened was so wrong. And I knew I had to write this story for their children.”

“When We Were Shadows” (ISBN: 9781772600612) was published in April, 2018 by Second Story Press. It is recommended for inclusion in all school libraries and for readers aged 9 and up (grades 5 – 8). The book will facilitate meaningful discussions about war, survival, family relationships, justice, prejudice, and the heroic kindness of strangers.

Be the first to comment on "Book Review: When We Were Shadows"