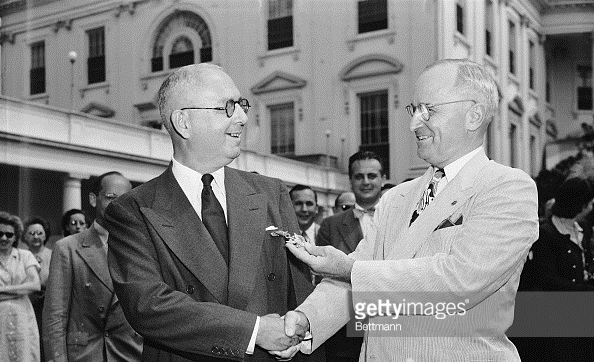 President Truman presenting the Medal of Merit to David K. Niles. The world premiere reading of a new play by Leonard Stone entitled "Truman's Jew" will be performed at the Beth Israel Synagogue in Edmonton on December 11, 2017. (Photo: Getty Images)

(EJNews) – Beth Israel Synagogue is pleased to announce its presentation of a world premier reading of TRUMAN’S JEW, a recently completed play dealing with the intrigue, deception and daring that occurred in the Truman administration prior to the United Nation’s partition of Palestine into Jewish and Arab lands, and America’s recognition of the modern-day state of Israel.

The singular evening performance will take place in the synagogue’s sanctuary at 131 Wolf Willow Road in Edmonton on Monday, December 11 at 7:30 pm (sharp). Directed by Edmontonian Dave Horak, the fully staged reading will feature some of Alberta’s finest actors.

“We are thrilled to be staging this world premiere reading for the Edmonton Jewish Community and we also expect to see numerous folks from the general community, theatre enthusiasts and historians in attendance,” said Committee Chair, Lewis Wasel.  “Our goal is to sell every seat in the Sanctuary.”

Written by Winnipeg native Leonard David Stone, a fifty-year internationally recognized administrator in the cultural arts, TRUMAN’S JEW is based upon his extensive research of private papers, letters, and diaries including long overlooked source materials contained in the archives of the Truman library, Independence, Missouri. 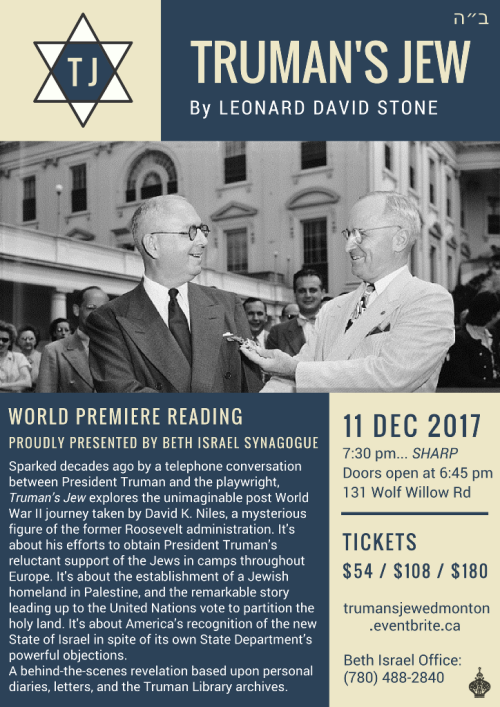 The fact that Truman supported the creation of a Jewish homeland is historically well known. What isn’t generally known, talked of or written about, is the story Stone illuminates in TRUMAN’S JEW. Why did Truman become involved? Who was the mysterious Jew that worked on him? What powers of government worked until the last moment against modern-day Israel’s creation, and who was the anti-Semitic racist whose involvement was essential? And what unimaginable role did a former Ku Klux Klan member have in this never discussed story of betrayal, life-challenging loyalty and outright courage.

“Truman’s Jew is the secret backstory struggle to win the UN vote, and get American recognition for the new state,” explains Stone. It was sparked by a 20-minute phone conversation he had in 1963 with then former US President Truman. “The play explores in dramatic terms, the remarkable journey taken by a Bostonian Jew and former member of the Roosevelt administration named David Niles, and the conflicted and often uncertain Truman

during the year leading up to May 14, 1948 when ben Gurion declared the State of Israel. It is about their battle with then Secretary of State George Marshall and his cohorts. It is about efforts to win Truman over, efforts that include Truman’s closet personal friend, coincidentally, a Jewish man named Eddie Jacobson, and Chaim Weitzman in a climactic history changing showdown with the Justice and State Departments, Britain, the Arabs and Russia.”

Stone, has offered the world performance reading of TRUMAN’S JEW to Beth Israel’s annual support campaign prior to any performance staged, or otherwise presented. Its public Edmonton presentation is truly a world-premiere event.

“This year’s Yom Kippur appeal at Beth Israel Synagogue made by President Dr. David Vickar urged the congregation to purchase tickets to the play. This is an extraordinary opportunity for the audience and the net proceeds will go towards youth programming at the Synagogue,” explained Wasel.

Please join Stone and the Beth Israel Family Shul on Monday December 11 at 7:30 sharp. Tickets range in price from $54 to $180 per person and are available at trumansjewedmonton.eventbrite.ca or by calling the Beth Israel office at (780) 488-2840.