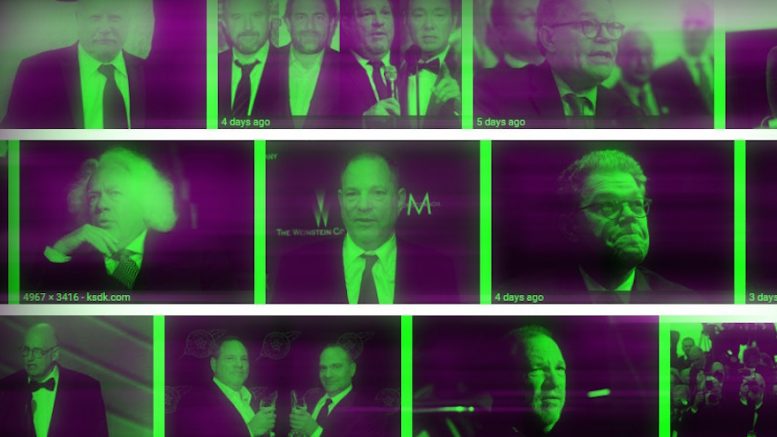 A screenshot from Google Images includes several prominent Jews accused of sexual harassment in the past month. (Google Images)

I often joke that JTA reporters and anti-Semitic bloggers write the same stories, only with different headlines. We proudly search down Jewish celebrities to show the diverse ways that Jews are contributing to the wider culture. The Daily Stormer uses the same names to prove that Jews are taking over.

The problem for us, of course, is when the Jews we report on do bad things. Very bad things. The last few months have seen a deluge of stories about Jews in trouble, starting with the ugly revelations of sexual abuse by the Hollywood mogul Harvey Weinstein. Next came the director and writer James Toback, the former New Republic editor Leon Wieseltier and the journalist Mark Halperin. And Brett Ratner. And Jeffrey Tambor. And now Sen. Al Franken and New York Times reporter Glenn Thrush.

As the news broke about each of these men, we asked the same question in the JTA office: Do we? It’s not a question about “protecting” Jews, or trying to hide bad Jewish news from society at large. This isn’t 1963, when a critic told Philip Roth that his portrayals of deeply flawed Jewish characters “have done as much harm as all the organized anti-Semitic organizations have done to make people believe that all Jews are cheats, liars, connivers.”

For me it’s a deeper question about identity, belonging and meaning.

JTA’s corner of the ethnic media market is Jews who make news. Deciding what’s “Jewish news” is easy when the subject is religion, or the ways Jewish groups are promoting policy, or when a Jewish artist, chef or filmmaker explores a distinctly Jewish subject.

I like how one of my predecessors described the Jewish Telegraphic Agency in 1933: “a roll call, as it were, not only of the capitals of the world’s busy life, but also of the smaller centers where Jewish life is pulsating, where the struggle for existence is hardest and where Jewish contributions to the economic, cultural and political life of the world are being made.”

But what do you do when someone who is “just Jewish” commits a crime or is enmeshed in scandal — or, for that matter, wins a secular award or goes missing in the Himalayas? What criteria do you use to “claim” someone for an outlet like JTA?

The sex harassment controversy is a useful test case. It is no surprise that Jewish names keep popping up in the aftermath of the Weinstein scandal, since Jews are overrepresented in Hollywood back offices and journalism. But is it a “Jewish” story that a guy named Weinstein is in trouble? Or by noting his ethnicity, are we making the same mistake as the Tablet columnist who managed to implicate all Jewish males in the misdeeds of a single person?

Over the years I’ve developed a loose set of guidelines to determine who “gets in” and who doesn’t. It’s a three-part test. Newsmakers must score one or more:

A. Is the subject significantly identified with a Jewish community, specific Jewish topics or a distinctly Jewish way of being in the world?

This category includes Jewish clergy and “Jewish professionals,” prominent givers to Jewish communal organizations and the Jewish leaders whose salaries they pay. It also includes politicians who take a strong interest in Israel and other Jewish causes, artists who write or have written about distinct Jewish themes, and just folks who are strongly identified with or by a Jewish community.

Weinstein, for example, has given to Jewish causes and intended to make a film about the Warsaw Ghetto uprising. We didn’t rush to report on Mark Halperin because he isn’t highly identified with Jewish activities, causes or communities. You could say the same about Thrush — but he’s an exception that proves the rule: I okayed an item on Thrush precisely because I and even some of his closest colleagues didn’t realize he was Jewish. Sometimes, and I am not saying this is the proudest thing we do, we feel it is our job to answer the question Is So-and So Jewish?

One problem with category A is that it both privileges and burdens Orthodox Jews, rabbis of all stripes and Israelis. Because their Jewish identity is so obvious — because they “represent” — the things they do tend to be overreported in the Jewish media. For example, a secular Jewish landlord in Ohio who defrauds her customers is less likely to make the “Jewish news” than the Orthodox rabbi who is photographed in his yarmulke at his arraignment.

B. Are Jewishness or Jewish issues referenced in the way the subject makes news or is written about?

Jewish victims of anti-Semitism make news no matter how they personally identify. The same goes for celebrities who bring up their Jewishness in a distinct way or have it brought up for them. Not everything Lena Dunham does or says qualifies as Jewish news, but when a few years back she got in hot water for an essay comparing a dog to her “Jewish boyfriend,” we wrote about it.

C. Is the subject just so well known and so identifiably Jewish, even if they fail tests A and B?

I sometimes call this the Woody Allen rule (although you could argue that he also fits in A and B). Or maybe the Bernie Sanders rule. Throughout much of his career, the senator from Vermont wasn’t all that involved in a Jewish community or Jewish issues. Until he ran for president, he’d mostly show up in our archive in tallies of how Jewish members of Congress voted. But c’mon! He’s Bernie Sanders! From Brooklyn!

But when do you stop, exactly? Mark Zuckerberg and Jared Kushner make news every day; does the fact that they are Jewish make it Jewish news? We argue about this all the time.

So applying the test above, we wrote about Mayim Bialik after she wrote an oped about the sexual assault scandals. It was Jewish news because of A (the television star writes frequently about her observant Jewish lifestyle); B (her essay made reference to observant Jewish codes of modesty) and C (her name is Mayim Bialik, for Pete’s sake).

Toback’s sex scandal got a write-up because of A (he wrote the Jewish gangster biopic “Bugsy” and appeared in it as Gus Greenbaum). We didn’t report on allegations of abuse leveled at screenwriter Scott Rosenberg because he didn’t score as A, B or C.

I am aware that this is an inexact science and we run the risk of leaving out people. I also worry that reporting on certain people or incidents implies Jewish significance where there is none. Consider former White House aide Ezra Cohen-Watnick. Sure, he’s Jewish. But were we to mention that fact in a report about his ouster by H.R. McMaster (“National security adviser cans Jewish aide!”), it may have implied cause and effect where there was none.

Ultimately, any ethnic outlet has to act as a “roll call” of its people without suggesting that any of its subjects are representatives of the whole. For an example of what not to do, consider a recent New York Times blog about allegations of sex abuse against a prominent Swiss Muslim scholar, Tariq Ramadan. “Could this be the Harvey Weinstein of Islam?” blared its tone-deaf headline before it was changed. Tariq Ramadam is no more representative of Muslims than Harvey Weinstein is of Jews.

Still, when Jews do something bad, it is not our role to ignore it or justify it. Roth, after being urged to stop writing about “bad Jews,” invoked Jewish tradition itself: “[T]o indicate that moral crisis is something to be hushed up is not, of course, to take the prophetic line,” he wrote, “nor is it a rabbinical point of view that Jewish life is of no significance to the rest of mankind.”

We’re not prophets or rabbis. At most we’re scribes. I go back to that 1933 mission statement, which said JTA “brings the reader into contact with the various climes, political, social and economic conditions where Jewish life unfolds itself on the varying backgrounds of the different countries, all ringing out their messages in such varied tones.”

Be the first to comment on "op/ed: Jews make news, but when is it Jewish news?"