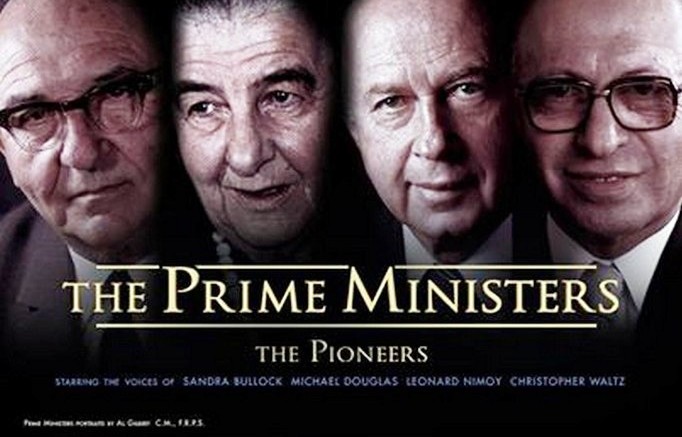 – Edmonton’s Beth Israel Synagogue, the Family Shul, is eagerly anticipating their biggest fundraiser of the year – the screening of The Prime Ministers – The Pioneers on June 7 at 6:45 pm at the Garneau Theatre.

The evening event is being held to honour Mitch Klimove for his exceptional contributions to the fabric of Beth Israel Congregation and to the Edmonton Jewish community at large. Don’t miss this opportunity to pay tribute to Mitch and at the same time, have a wonderful night at the movies.

Prime Ministers: The Pioneers, is the 13th release by Moriah Films, the Academy Award winning documentary filmmaking division of the Simon Wiesenthal Center.

Based on the bestselling book by Ambassador Yehuda Avner, The Prime Ministers: The Pioneers takes the audience inside the offices of Israel’s Prime Ministers through the eyes of an insider, Yehuda Avner, who served as a chief aide, English language note-taker and speechwriter to Levi Eshkol, Golda Meir, Yitzhak Rabin, Menachem Begin, and Shimon Peres.

The first of two parts, The Prime Ministers: The Pioneers was released in 2013 with almost immediate accolades. It was winner of the 2013  Audience Award for Best Documentary Film at the Gold Coast International Film Festival. This  film is the first and only insider account of Israeli politics from the founding of the Jewish State to the Yom Kippur War.

The Prime Ministers focuses on Ambassador Avner’s years working with Prime Ministers Levi Eshkol and Golda Meir and then US Ambassador Yitzhak Rabin and reveals new details about the Six-Day War, the development of Israel’s close strategic relationship with the United States, the fight against terrorism, the Yom Kippur War and its aftermath.

According to Film Festival Today. the film presents many inside stories “such as President Johnson and Prime Minister Eshkol, a former kibbuznik, taking care of cattle on LBJ’s farm.  Eshkol succeeded in this visit in getting armaments and financial support from the United States because the Soviet Union was rapidly building up the armed forces of Syria and Egypt. But Johnson was also swayed by the argument that “the survival of 2.5 million Jews in a sea of hostile Arabs had to be assured.”  This was the beginning of the strategic alliance between USA and Israel.”

In the spring of 2014, the second film based on Ambassador Avner’s book, The Prime Ministers: Soldiers and Peacemakers, was released, examining Ambassador Avner’s experiences with Prime Ministers Yitzhak Rabin, Menachem Begin and Shimon Peres as well as his service as Israel’s Ambassador to England. The early efforts at negotiating agreements with Egypt, the raid on Entebbe, Anwar Sadat’s historic visit to Jerusalem, the Camp David Accords, the bombing of Iraq’s nuclear facility, the war in Lebanon, the Oslo Accords and the ongoing struggle to make peace with Israel’s Arab neighbors and the Palestinians are some of the topics covered as The Prime Ministers: Soldiers and Peacemakers builds to its dramatic and emotional conclusion.

Weaving a rich tapestry of history and personal testimonies, The Prime Ministers brings some of the most important events of the 20th and 21st centuries to life. Starring the voices of Sandra Bullock as Golda Meir, Michael Douglas as Yitzhak Rabin, Leonard Nimoy as Levi Eshkol and Christoph Waltz as Menachem Begin, The Prime Ministers: The Pioneers was written, produced and directed by Academy Award winner Richard Trank and co-written and produced by twotime Academy Award winner Rabbi Marvin Hier. Grammy and Emmy winner Lee Holdridge composed and conducted the films’ original score.

Moriah Films is a division of the Simon Wiesenthal Center which produces documentaries concerning human rights and the major events and personalities of 3,500 years of Jewish history. Moriah Films has an unmatched track record, having produced twelve critically acclaimed documentaries: Genocide, Echoes That Remain, Liberation, The Long Way Home, In Search of Peace Part One: 1948-1967, Unlikely Heroes, Ever Again, Beautiful Music, I Have Never Forgotten You: The Life and Legacy of Simon Wiesenthal, Against the Tide, Winston Churchill: Walking With Destiny, and It Is No Dream.

Moriah Films has distribution rights throughout France, Germany, the United Kingdom, Brazil, Portugal and the Benelux Countries (Holland, Belgium, Luxembourg). Moriah films have been televised throughout the Americas, including HBO, Discover, Starz and Showtime. Overseas, the documentaries have been aired on Channel 4 in England, State Television in the People’s Republic of China, Russian TV, Japan NHK’s and Israeli TV.

The films are also distributed to universities and Hillel houses across the country. The Moriah Films audience is larger and more diverse than ever – educating and impacting people worldwide.