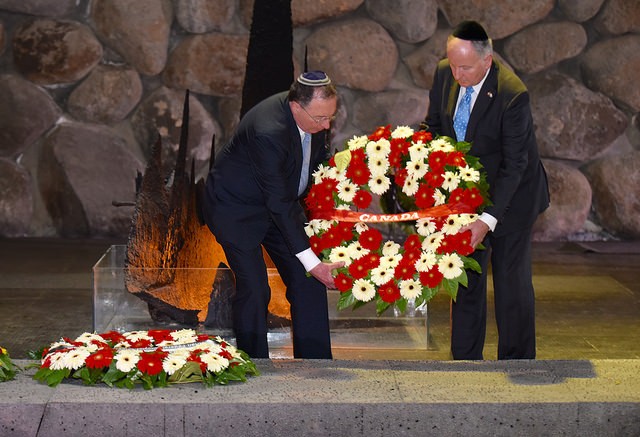 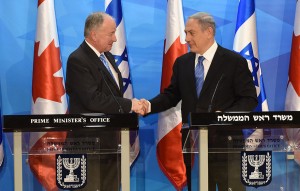 “Canada and Israel enjoy a deep and abiding friendship that centres on the values of freedom, democracy, human rights and the rule of law,” said Minister Nicholson. “Canada does not just go along to get along. We will continue to stand up for what is right and just, and we will fight international efforts to delegitimize the state of Israel.”

“Israel is a nation of freedom and democracy in a region where repression and instability are all too common,” continued the Minister. “Canada and Israel are the greatest of friends and the most natural of allies. We will continue to stand as vocal supporters of Israel’s right to exist and to defend itself against those who seek its destruction.”

While in Israel, Minister Nicholson also visited Yad Vashem, the Holocaust Memorial in Jerusalem and laid a wreath there on behalf of Canada.

“The Yad Vashem memorial stands as a stark reminder of one of the darkest moments in our history,” said Minister Nicholson. “It is our solemn duty to remember the six million Jews, including one and a half million children, who were murdered, and to honour the heroic survivors. As the world is witnessing a resurgence of anti-Semitism, our government is committed to combatting this pernicious hatred in all its forms, ensuring that the lessons of the Holocaust are never forgotten, and to standing up for Israel’s legitimate right to defend itself by itself.”

A day earlier, on June 2, Minister Nicholson, concluded a successful visit to Paris, France, for the foreign ministers’ meeting of the anti-ISIS Coalition Small Group.

The coalition partners, including Canada, assessed the progress of military efforts and political and national reconciliation processes. Minister Nicholson highlighted the existential threats to ethnic and religious minorities in Salamiyeh, Syria, where the emerging alliance between the so-called Islamic State of Iraq and Syria (ISIS) and the Army of the Conquerors poses a crucial challenge for the coalition.

Coalition members endorsed action plans for four of the coalition working groups. These plans include stemming the flow of foreign terrorist fighters, disrupting ISIS’s sources of funding, counter-messaging and support for the stabilization of liberated areas. Furthermore, the partners endorsed the anti-ISIS coalition’s core vision statement: to provide unity of purpose in the fight against ISIS.

Minister Nicholson stated, “ISIS is a violent threat not only to the region but also to the entire globe and all those who value freedom, democracy, human rights and the rule of law. The international community must concertedly degrade this ideological scourge and defend the principles that have made our nations great, prosperous and free. While our actions are showing results, much work remains to be done and Canada will continue to play its part.”

Coalition countries have agreed that defeating ISIS and bringing stability to Iraq will require a long-term campaign focused on multiple lines of effort. In support of the Counter Financing Action Plan, Canada provided an update on its plans to deliver $2 million in targeted assistance to countries in the Middle East and North Africa for the prevention, detection, prosecution and conviction of those seeking to fund or launder funds for ISIS-related activity.

In support of the implementation of the Foreign Fighters Action Plan, Canada provided an update on $1 million in counter-terrorism capacity-building programming to address the threat of foreign fighters. Funds will support technical training of front-line police officers in the Middle East and North Africa to help countries stem the flow of foreign fighters into ISIS-held territory.

Canada also announced $500,000 in funding to Mennonite Central Committee to support peace education and promote religious dialogue in Iraq and Syria, as well as in Lebanon.