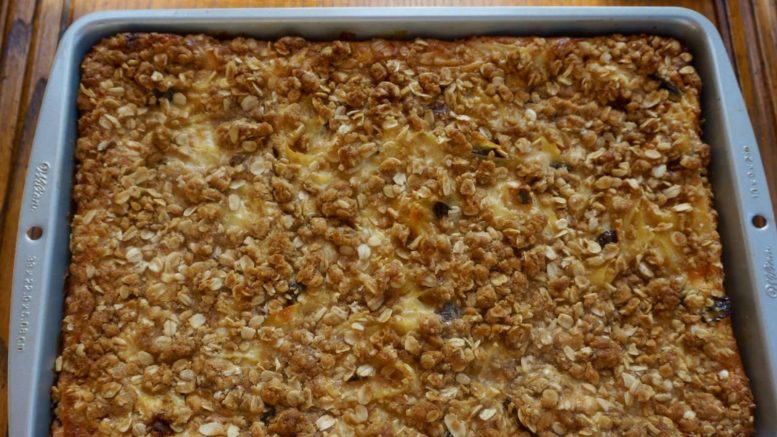 (The Nosher via JTA) — One day many years ago – during the High Holidays yet — I called my mother early in the morning to yell at her about kugel. Really. In my family kugel meant skinny noodles mixed with eggs, schmaltz, salt and fried onions. I’d heard of the sweet kind from friends who rhapsodized about the ones their grandmas made. But I’d never tasted any of those because my mother told me they were horrible.

Years later, when I finally did, it was a watershed culinary moment for me. I was at a friend’s break-fast and she gave me a dishful of what I came to believe was the best noodle kugel I ever tasted. It had bountiful quantities of sugar and cheese, it was rich with dairy sour cream and it had a crunchy, butter-drenched frosted corn flakes crust.

“Ma! You were absolutely wrong. What were you thinking!” I yelled into the phone. I brought her a sample and she, no fool, realized how mistaken she’d been (although she still preferred our savory kind, which I still make often).

After that I became a sort of a sweet noodle kugel aficionado. I make all kinds: dairy and parve, with fresh fruit or dried, with a plain top or a crispy coat. Although these versions are sweet, I serve most of them with dinner – in the same way I serve applesauce or cranberry sauce with savory foods.

Recently I thought about the fact that kugel, being a kind of pudding, could actually make a nice dessert. Like bread pudding but made with noodles. So with apples-and-honey season in mind, I decided to go all in.

This is it — apple streusel pie kugel, lush with roasted fruit, orange-plumped raisins, cheese and a topping of oat-based streusel. We ate it with vanilla ice cream once and another time topped with lightly sweetened heavy cream that had been whipped but still pourable. Don’t even think about the calories. Just enjoy.

Place the raisins in a bowl. Heat the orange juice and honey in a small saucepan until the honey has melted. Stir to blend the liquids completely and pour over the raisins. Let soak for at least 30 minutes.

Place the apples on the baking sheet. Sprinkle with 2 tablespoons of the sugar and toss to coat all the pieces. Roast for about 15 minutes, tossing the pieces once or twice, or until they are tender. Remove from the oven and set aside.

Turn the oven heat to 350 F. Cook and drain the noodles and put them in a large bowl.
In an electric mixer, beat the cream cheese and butter until thoroughly blended and softened. Beat in the remaining sugar until well blended. Add the sour cream and blend thoroughly. Add the eggs one at a time, beating after each addition.

Stir in the apples, raisins (including liquid) and cinnamon.

In a bowl, mix the oats, flour, brown sugar and salt. Add the butter and work it into the flour mixture until it resembles coarse crumbs.

Sprinkle the oat mixture over the noodle mixture. Bake for 45-50 minutes or until lightly browned and crispy on top.

(Ronnie Fein is a freelance food and lifestyle writer. She is the author of four cookbooks and was a contributing editor to “The New Cook’s Catalogue,” the 25th anniversary edition of the James Beard original.)

Be the first to comment on "Apple Pie Kugel Recipe"