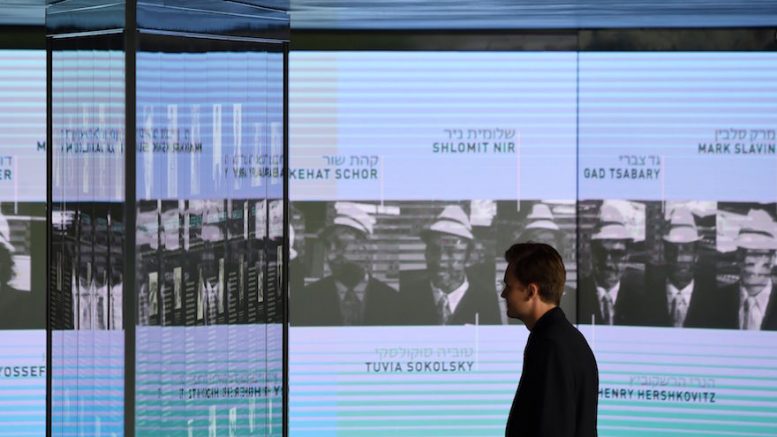 A visitor looking at the portraits of the Israeli Olympians murdered at the 1972 Munich games at a new memorial in the German city, Sept. 6, 2017. (Christof Stache/AFP/Getty Images)

(JTA) — Forty-five years after the murderous PLO attack on Israeli Olympic team members at the 1972 games, a memorial dedicated to the victims opened on September 6 in Munich.

The memorial – largely realized through the persistent efforts of family members – features the biographies of the 11 Israeli athletes and coaches and a German police officer killed in the attack on panels with texts in German, Hebrew and English.

“We wanted to give the victims their identity back in the eyes of the public,” Bavarian Minister of Culture Ludwig Spaenle told the media on Monday September 4 during a preview of the site, which is cut into a hillside in the former Olympic park.

In his remarks at the opening ceremony, Israeli President Reuven Rivlin addressed those victims.

“[W]e march together with your children, your grandchildren, your relatives and your fellow Olympic delegation, all those who haven’t forgotten you for a moment,” Rivlin said, adding that he hoped a moment of silence would be introduced at future Olympic Games in their memory.

Ronald Lauder, head of the World Jewish Congress, stressed the universality of the monument, saying it is “not just about Jews.”

“It is about all people. No one anywhere has the moral right to inflict terror on anyone,” he said.

German President Frank-Walter Steinmeier said the monument was too long in coming.

“We owe it firstly to you, the relatives,” he said. “The Olympic village became a place of Palestinian terrorists, a stage for their boundless hatred for Israel.”

Instead, he said, the site is now a place of remembrance and healing.

“Only when Jews in Germany feel safe here, feel at home, only then has Germany become whole,” Steinmeier said.

“Becoming German means to be aware of this history, to understand this history and to accept this history. It holds true for people coming from other cultures too,” he added, alluding to more than 1.5 million recent refugees, many of them Muslims, currently living in Germany.

The high-level delegation planned to visit the Dachau Concentration Camp Memorial site later Wednesday in a gesture organized by Josef Schuster, president of the Central Council of Jews in Germany. Some 200,000 Jews are now living in Germany, mostly from the former Soviet Union in the years following German unification.

The memorial cost 2.35 million euros, or about $2.8 million. The funding came primarily from the State of Bavaria, the German federal government, the City of Munich and the International Olympic Committee.

Until now, the main memorials have been a sculpture and plaque. Plans for the memorial were announced in 2013.

Finally, the human stories are being told and the lessons of history underscored, Jewish leaders said ahead of the opening ceremonies this week.

The new memorial attests “to the bloodshed that soaked what should have been a joyous celebration of sport” and camaraderie, Lauder said Tuesday in an email to JTA.

Lauder said it was “regrettable that it took nearly half a century after the saddest moment in Olympic history” to reach this point, but lauded the German government for its “role in this significant tribute.”

He also said that life for Jews has changed for the better in Europe over the past 80 years, despite a recent increase in anti-Semitism and anti-Zionism.

“We should also be encouraged by the fact that so many European governments are vigilant in their defense of Israel and of all of their citizens, Jews and non-Jews alike,” Lauder added.

Charlotte Knobloch, head of the Jewish Community of Upper Bavaria and Munich, and former president of the Central Council of Jews in Germany, said in a statement released Tuesday, “The [1972] attack was not just against Israel, not just against Jews. It was an attack on all of us, on the Olympic idea, the vision of freedom and peace for all humans.”

She applauded an additional as yet incomplete element of the memorial — a “school of democracy” to be located in the tower at the Fürstenfeldbruck airport, site of the botched rescue attempt.

Knobloch thanked Spaenle for his “outstanding commitment” to realizing a memorial “that gives the victims a face, tells of their lives, remembers them — and warns us never to take life, freedom or democracy for granted.”

The memorial was designed by a team under the auspices of the Bavarian Ministry of Culture in consultation with family members of victims, the consul general of Israel, experts from the concentration camp memorial at Flossenburg, the Jewish Museum in Munich and the Bavarian State Ministry for Political Education.

Ahead of Wednesday’s ceremony, the German news media featured interviews with family members, several of whom are expected to attend.

Among them will be Ankie Spitzer, who was 26 years old when she lost her husband, the coach and fencing master Andre Spitzer, in the attack. She told Deutschlandfunk radio that she could not deal with the fact that her loving husband had been brutally murdered and “no one regretted it.”

“It took 45 years, but I don’t regret the long and lonely journey that brought us to this day,” she said. “This is what I wanted.”

Be the first to comment on "45 years after the Munich Massacre, murdered Israeli Olympians get a memorial"