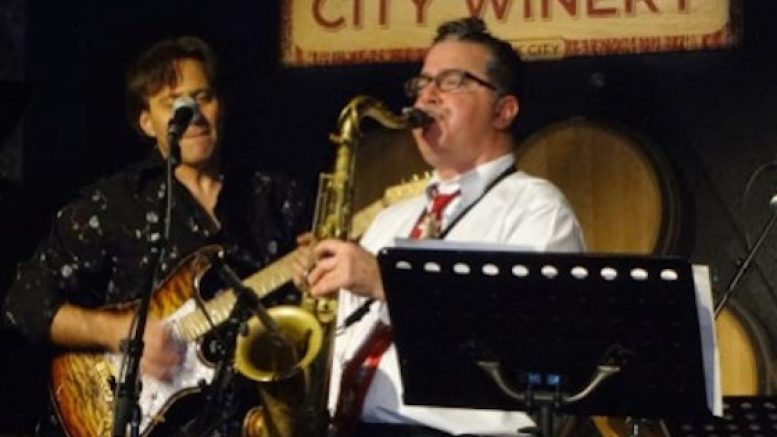 Saxophonist Paul Shapiro will be in Edmonton on September 12 for the Edmonton UJA Kickoff - a night of Klezmer music. There is no charge for UJA donors and an $18. charge for non-donors. RSVP by September 8.

The evening will also include guest speaker Ann Baidack Pava, past chair of National Women’s Philanthropy for the Jewish Federations of North America.

The Jewish Federation of Edmonton is presenting this exceptional event at no charge to UJA members.  Non-members welcome with an $18 donation. Seats are limited and must be reserved in advance by emailing eliannal@edjfed.org or calling 780-487-0585 ext 207. 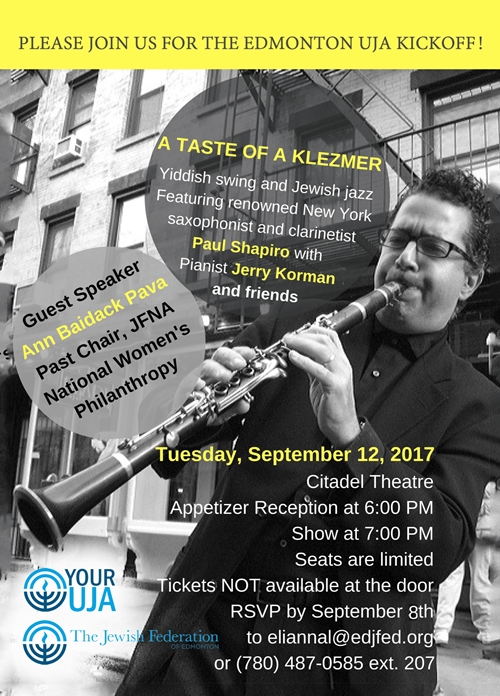 Paul Shapiro is a renowned New York-based saxophonist with serious new-jazz and R&B credentials and an incredible range that delights music lovers of all ages and genres. A mainstay of New York City’s downtown creative nexus, Shapiro’s background in jazz and funk led him to recording session work with Michael Jackson, Rufus Wainwright, Queen Latifah, Lou Reed and Jay-Z, among many others.

He was co-founder of Brooklyn Funk Essentials and a former member of Microscopic Sextet but his growing interest in Jewish music eventually led him to Klezmir – a fascinating middle ground between big band swing, Yiddish pop and R&B.

But a funny thing happened on the way to downtown hip street cred. Shapiro encountered songs from the 1930s and ’40s — like Slim Gaillard’s “Dunkin’ Bagel” and Cab Calloway’s “A Bee Gezindt” — that clearly indicated a significant musical exchange. Rather than grafting forms such as Dixieland and bebop onto traditional Jewish instrumental music, Shapiro’s third release on the Tzadik label, “Essen” delivers those Jewish folk forms in their pure, joyful and unadulterated form. The songs on “Essen” feature vocals that evoke the humour and pathos of traditional Jewish culture and Shapiro’s fine horn work and ear for arrangements are completely dazzling.

“Essen” features songs mostly about food; there are plenty of bagels, matzo balls, and gefilte fish in these tunes, given a contemporary twist by Shapiro and his R&B-fueled outfit.

In his fourth and most widely-acclaimed release on the Tzadik label, entitled “Shofarot Verses,” Shapiro reimagines Jewish liturgical melodies and modes through a modern worldly jazz lens. What makes this so engaging is the way Shapiro mixes the songs of prayer in with the blues, R&B, surf and improvisational jazz to create mature new music.

“Shofarot Verses” shows off all sides of Shapiro’s musical personality, from the dark, intense spirituality of a solo version of “Hashiveinu” to the guitar-driven antics of “Surfin’ Salami.”  His playing is sonically rich and harmonically dense, and the shifts in mood are deftly achieved and frequently quite funny. Given the numerous references to the High Holy Days on the album this might just be perfect listening for the month of Elul which coincides perfectly for the Edmonton concert on September 12. He might even play the shofar.

Guest speaker for the evening event, Anna Baidack Pava is a passionate advocate for Jewish day school education. She was the founding president of the Hebrew High School of New England, the region’s first Jewish high school, serving the communities of Western Massachusetts, Greater Hartford and New Haven, Connecticut.

In 2006, Pava received the Kipnis-Wilson/Friedland award as an outstanding woman philanthropic leader at the International Lion of Judah Conference in Washington, D.C. She is also a recipient of the ADL’s Torch of Liberty Award, the Harold Grinspoon Foundation’s Lay Leadership Award for Excellence in Jewish Education, and the Philip E. Saks Young Leadership Award of the Jewish Federation of Western Massachusetts.

This fabulous event will launch the 2017 Edmonton United Jewish Appeal Campaign. No solicitation will take place that evening. The event will begin with an appetizer reception at 6 pm and the show will start at 7 pm. To reserve your seat, contact eliannal@edjfed.org.