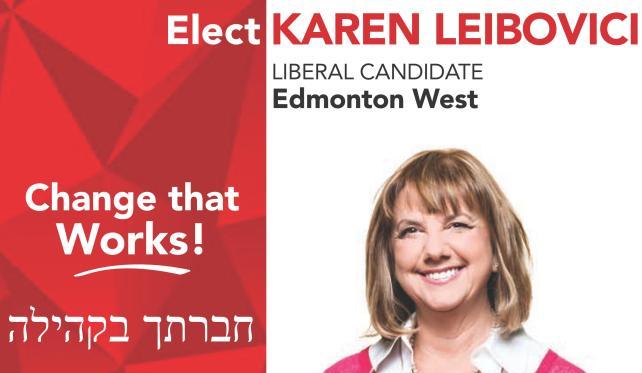 Karen Leibovici, Liberal Party of Canada candidate for Edmonton-West speaks out to the community.

– As many of you know, I am both a friend and a proud member of Edmonton’s Jewish community.  My husband and I came to Edmonton in 1980 from Montreal where we were surrounded by Yiddishkeit.  When we moved to Alberta we hoped to find that same sense of community here.  And we did! We found we were among friends who shared the same values, aspirations and hope for the future.

The concept of tikkun olam, repairing and healing what is broken in the world, is rooted in our community.  Growing up, this idea became foundational to my understanding of public service.  Advocating for the community and those who have no voice or were marginalized, led me to become a social worker.  My career in politics unfolded always with the foundation of community service and respect for our community.

Whether as a Member of the Legislative Assembly or as a City Councillor, I have always advocated for greater consideration of all faiths in politics.  I was proud to ask Rabbi Ari Drelich to place a mezuzah on my office doors at both the Legislature and City Hall.  I was honoured to play a role in the passing of the Holocaust Memorial Day and Genocide Remembrance Act.

I was delighted to light the Chanukiah on the legislative grounds and proud that I was able to rally financial support among my City Council colleagues to celebrate the hundredth anniversary of the Chevra Kadisha.

Our country has changed.  The very values that make us Canadian have been eroded. Our country was once respected on the world stage.  The international community once used to listen to Canada. Now, no one is really listening.

We are now governed by fear, not the generosity and kindness that were once synonymous with Canada.  I realized that I could not stand by and watch our country become more fragmented.  So I made a decision to run as the Federal Liberal candidate in Edmonton West.

Let me be clear. I would never stand for election for the Liberals if they did not support Israel and the Jewish community.  Nor would I run as a candidate if Justin Trudeau did not support our community.  I am proud to be running as a Member of Parliament under a party that supports Israel and her right to exist as the only Jewish democratic country in the region. I am proud to share that conviction with my fellow Jewish candidates across the country.

You know me.  I don’t mince words.  When I feel strongly about something everyone knows it. After more than 20 years of public service, I have never forgotten my roots or my community, nor have I forgotten the need to advocate for those who need a voice.

I will never forget where I came from and who I am representing.  You can count on me. On October 19, I hope that I can count on your support.

1 Comment on "A message from Karen Leibovici, Federal Liberal candidate for Edmonton-West"