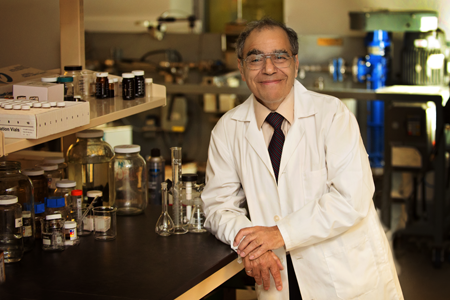 Dr. Jacob Masliyah will be invested in the Alberta Order of Excellence this month in recognition of his brilliant career in improving oil recovery from Alberta oilsands.

“These great Albertans have led the way in building our province. In addition to setting a standard of excellence in their respective fields of endeavour, they have inspired us all with their sterling citizenship and unwavering commitment to community service,” stated Lieutenant Governor Donald S. Ethell.

The Alberta Order of Excellence is the province’s highest honour a citizen can receive and is an official part of the Canadian Honours System.

“Through these honours, we are reminded that one person has the power to create meaningful change. It is this spirit that leads Albertans to achieve great things, and gives me great optimism for the future of the province,” noted Alberta Premier Rachel Notley.

An internationally recognized researcher of legendary reputation, Dr. Masliyah is known as much for his zest and enthusiasm, as for his ground-breaking research to improve oil recovery from the Alberta oil sands and reduce its impact on the environment. One supporter credits him with nothing less than transforming the energy economy of Alberta and Canada as a researcher, scholar, mentor and educator.

Born in Baghdad, Iraq, in 1942 into a family of eight that placed great value on education, Jacob earned his bachelor degree in chemical engineering at University College in London, England, and his Master’s and PhD degrees at the Universities of New Brunswick and British Columbia, respectively.

Ever grateful for the freedom and opportunities offered in Canada, Jacob says immigrating to Canada in 1964 is the smartest thing he ever did.

“There is no doubt in my mind that immigrating to Canada helped develop my research and pedagogy. You are free; you are not afraid. You are encouraged to speak your mind and collaborate with others and there is nobody really preventing you from doing that.”

Jacob, whose first job was pumping gas at age 17, accepted an associate professor position at the University of Alberta in 1977 and became a pioneer in extracting bitumen from the oil sands, and increasing the efficiency of the process. Thanks to the dedicated work of Jacob and others, it takes just half the amount of energy to produce a barrel of oil from the oil sands than it did in the 1970s. Jacob’s work has greatly contributed to the University of Alberta’s reputation as one of the world’s leading research centres and teaching institutions.

An important aspect of Jacob’s success has also been his ability to build partnerships between academia and industry and to foster a greater appreciation for university research. He worked with Syncrude Canada and Canada’s Natural Sciences and Engineering Research Council to establish the NSERC Industrial Research Chair in Oil Sands Engineering. Jacob was the first chair-holder at the University of Alberta and, in addition to his full university professorship, he held a second office in the Syncrude Research Facility in the Edmonton Research Park. His example inspired students and Syncrude scientists alike.

Initially established with Syncrude sponsorship, the NSERC Chair had unprecedented success and is now co-funded by the broader oil sands industry. In turn, the NSERC Chair became a catalyst for establishing numerous research chairs at the U of A Faculty of Engineering. His insights have influenced industry decisions on billion-dollar projects. He has also served industry needs by organizing and teaching specialty extraction courses to oil sands developers, and creating an Oil Sands Engineering option for graduating engineers. NSERC further supports Jacob’s research with one of its largest Discovery Grants.

As great as his research leadership is, Jacob has an equal ability to develop human potential as a mentor, educator and recruiter. He has been instrumental in attracting many academics and researchers to Alberta, including leaders who have gone on to hold NSERC Industrial Research Chairs.

In addition, Jacob helped the University of Alberta develop a core group of scientists that has gained tremendous international recognition. His extraordinary academic record also includes publishing two books on surface science, two handbooks on the theory and practice of bitumen recovery from Athabasca oil sands and more than 350 peer-reviewed papers. He has served as associate editor of the Journal of Porous Media, and on various international science and engineering editorial boards. To promote oil sands research, Jacob established at the University of Alberta a graduate scholarship to be awarded to two students on a yearly basis, valued at $4,000 each.

“In Alberta, the sky is the limit. It depends on you, it depends on how hard you work, how innovative you are, and what you want to achieve.”

The University of Alberta has recognized Jacob’s work with its highest awards: the J. Gordin Kaplan Award, the university’s second-ever University Cup for teaching and research and community service, the title Distinguished University Professor for outstanding distinctions, and an honorary doctorate in Science in 2013. Other university awards include two Engineering Undergraduate Teaching Awards, the C. Rutherford Award for Excellence in Undergraduate Teaching, and appointments as McCalla Research Professor and Killam Annual Professor.

Provincially, Jacob has been recognized with the Alberta Science and Technology Leadership Award for innovation in oil sands research, the Queen Elizabeth II Diamond Jubilee Medal and the Alberta Centennial Medal. The Association of Professional Engineers and Geoscientists of Alberta was proud to honour Jacob’s achievements with the Frank Spragins Technical Award. The Alberta Science and Technology Leadership Foundation also acknowledged Jacob’s achievements with its Outstanding Leadership Award.

Internationally, Jacob is one of only 16 Canadians and 218 worldwide to become a Foreign Associate of the United States National Academy of Engineering. He has traveled extensively over the years to deliver lectures and keynote presentations at universities, conferences and symposia around the world.

Jacob’s many friends and colleagues agree that he has played a pivotal role in the oil sands energy revolution, making an enormous contribution to the economic and environmental well-being of Alberta and Canada. Jacob attributes his success to a combination of good fortune, believing in one’s self, hard work and collaboration with exceptional students, researchers and colleagues both at University and industry.

Along the way, numerous scientists and students alike have been inspired by his enthusiasm, passion, knowledge and joy of discovery. Humble about his accomplishments, Jacob’s advice is simple: “Cherish your integrity and never give up.”

1 Comment on "Dr. Jacob Masliyah to be invested in the Alberta Order of Excellence"