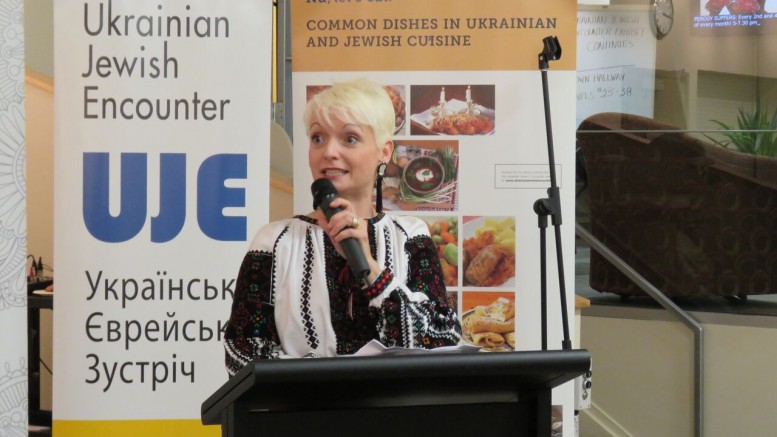 Suzanna Brytan , Executive Director of the St. John's Institute in Edmonton welcomed "A Journey through the Ukrainian-Jewish Encounter" exhibit to Edmonton. The Exhibit is on display at the Institute until August 18. Photos by Dan Moser

– An eclectic group of dignitaries, academics and interested individuals gathered on August 4 at the St. John’s Institute in Edmonton for the opening reception of A Journey through the Ukrainian-Jewish Encounter: From Antiquity to 1914, a cross-Canada travelling exhibition which runs until August 18. 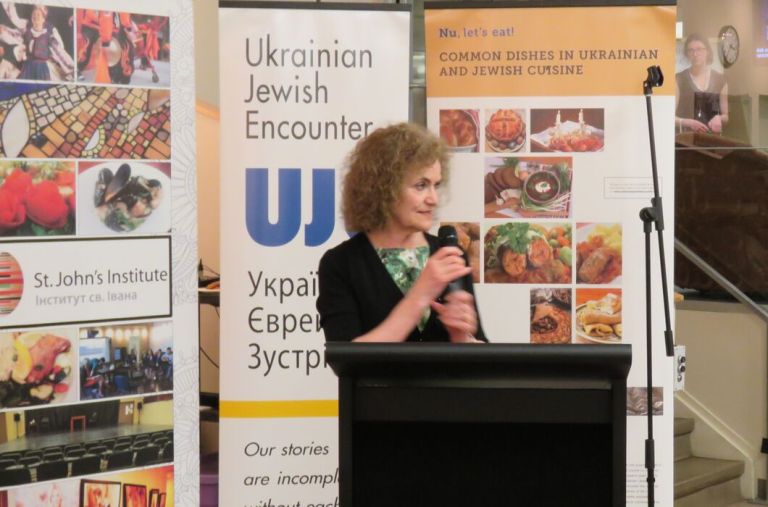 Alti Rodal, co-director of the Ukrainian Jewish Encounter and curator of the exhibit stressed the importance of the shared heritage and culture between the two peoples.

The obvious thing that comes to mind when you pair these two cultures is a tumultuous history of turmoil and violence. However, the multi-media exhibit currently on display in Edmonton takes a step back and examines their pre-WWI relationship of shared history and shared cultures.

The exhibit was created by the Ukrainian Jewish Encounter (UJE),  a privately organized multinational initiative launched in 2008 by a group of individuals from Canada, the United States, Ukraine, and Israel. Its work engages scholars, civic leaders, artists, governments and the broader public in an effort to promote deeper mutual comprehension and solidarity between the two peoples.

The reception was emceed by World FM – Ethnic Radio host Roman Brytan. He introduced the guest speakers which included a number of dignitaries from the UJE, and prominent members of the Ukrainian community as well as Jewish Federation of Edmonton (JFED) CEO Debby Shoctor and Minister of Multicultural Affairs Tim Uppal.

Among others, distinguished speakers included Suzanna Brytan, Executive Director of St. John’s Institute of Edmonton;  Alti Rodal, UJE co-director and exhibit curator; Berel Rodal Board member and  chairman of the Advisory Board of the UJE and leaders from the Alberta Society for the Advancement of Ukrainian Studies and the Ukrainian Council of Alberta. 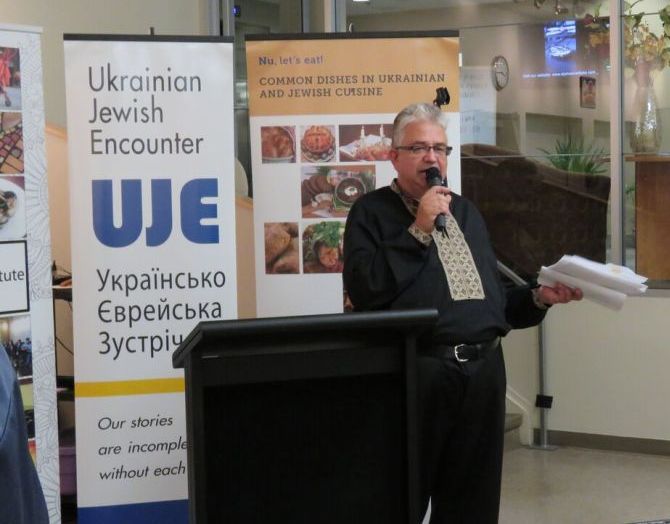 Each speaker reiterated the importance of the work that the UJE was doing in bringing the two cultures closer together, stressing the similarities between the groups and their shared heritage.

JFED CEO Debby Shoctor said that she was impressed and excited by the exhibit and that on behalf of the Edmonton Jewish community, she looked forward to continuing the relationship with the Ukrainian community in Edmonton.

The event included live music that demonstrated the shared culture and a delicious spread of both Ukrainian and kosher Jewish foods that also showed the strong influence the two cultures share. All the food was delicious and the kosher section of the spread was catered by Bliss Bakery. Several Jewish artifacts from Ukraine were on display – on loan from the Jewish Archives and Historical Society of Edmonton and Northern Alberta.

Created by UJE and co-funded by Citizenship and Immigration Canada, A Journey though the Ukrainian-Jewish Encounter: From Antiquity to 1914 consists of narrative, images, music, and continuously running videos. It offers an integrated account of the historical experience of Ukrainians and Jews, in all its complexities—under ever-changing political regimes, as two stateless peoples, side by side, over long periods of normal co-existence conducive to the creation of enduring cultures and cross-cultural influences, and during intermittent episodes of crisis and violence. 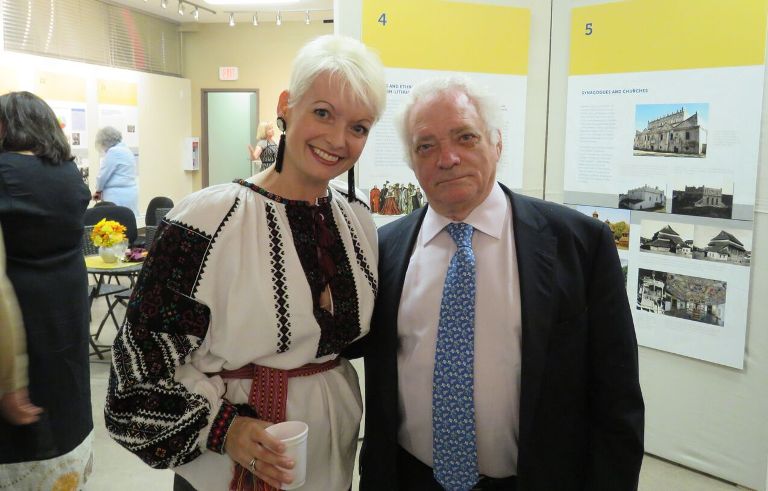 Suzanna Brytan and UJE board member and chairman of the advisory board Berel Rodal.

The territory of modern-day Ukraine has been the homeland of diverse and flourishing cultures, including one of the most populous Jewish communities in Europe, whose presence on Ukrainian lands dates from 2,000 years ago. The vast majority of Ashkenazi Jews today have their origins in Ukrainian lands, as do the roots of the Chasidic movement.

The blended Ukrainian-Jewish story, up to the end of Tsarist Russian rule and Habsburg Austro-Hungary, is of particular interest for both Ukrainian and Jewish audiences, but also for a wider Canadian public, offering diverse perspectives on a shared history.

The Ukrainian and Jewish communities in Ukraine, as pointed out in the exhibit, lived through “long periods of normal co-existence and multi-faceted cultural cross-fertilization.” Yet, because Jewish-Ukrainian relations have also had to bear stereotyping, the exhibit focused on “an integrated narrative of these two peoples… presented in the belief that there is much to be gained by viewing their historical experience together, in all its complexity.”

A Journey through the Ukrainian-Jewish Encounter: From Antiquity to 1914 opened in Toronto in June and was on display in Winnipeg last month. It will next be on display in Montreal. 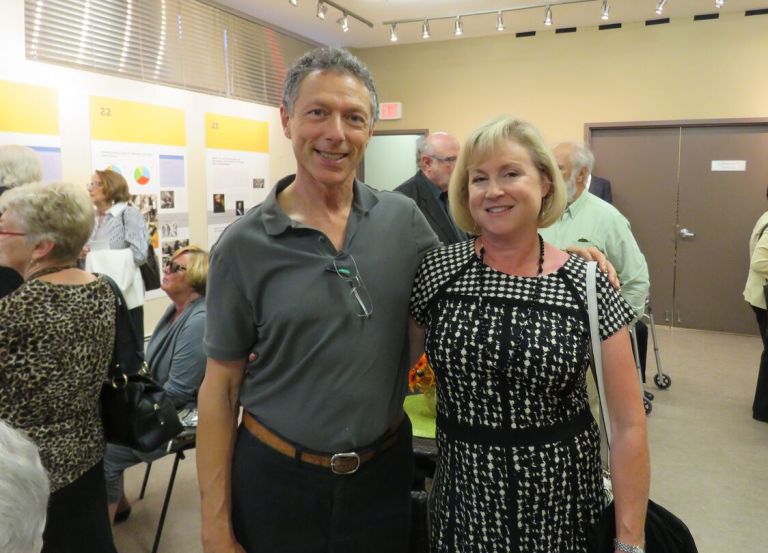 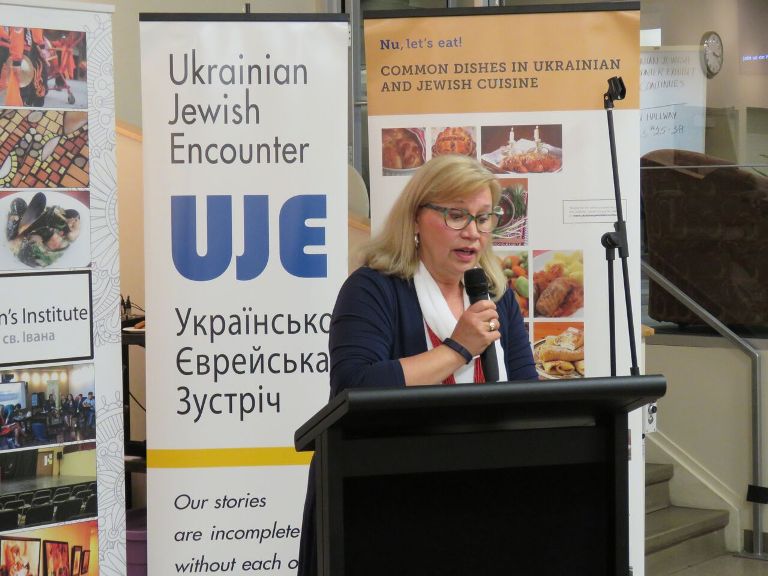 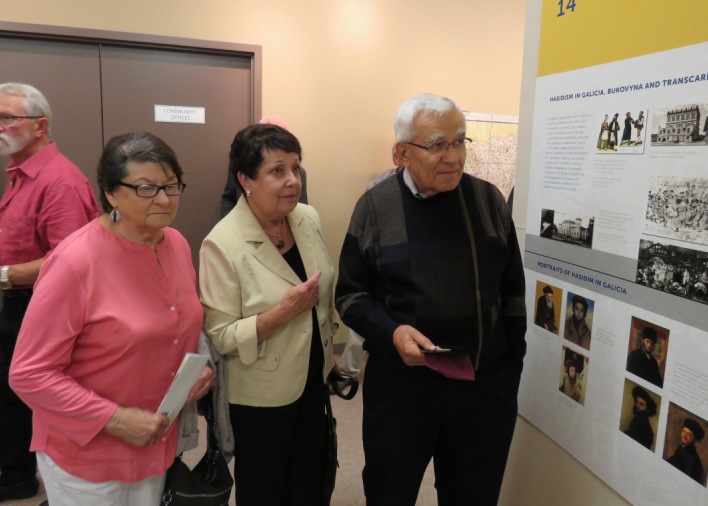 JAHSENA president Judy Goldsand and other interested members of the community. 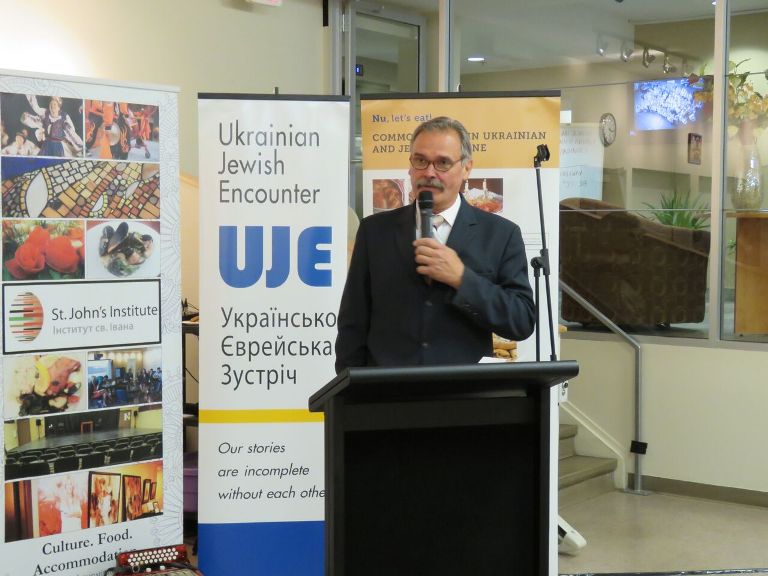 President of the Alberta Society for the Advancement of  Ukrainian Studies 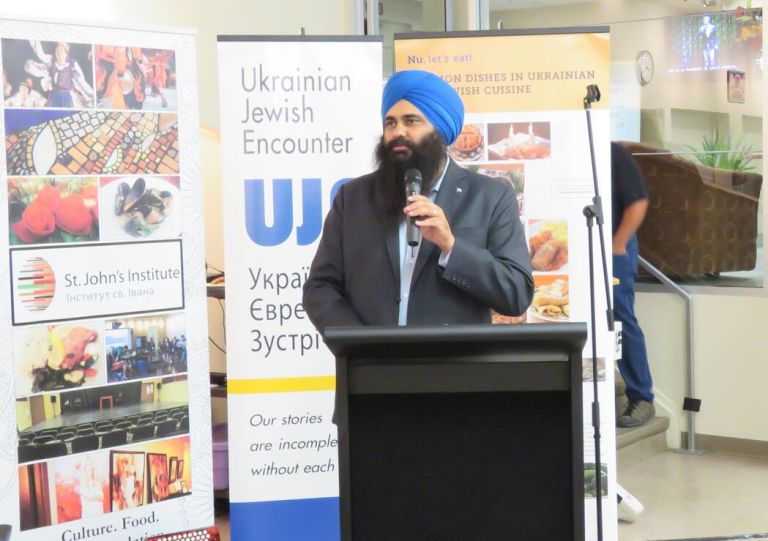 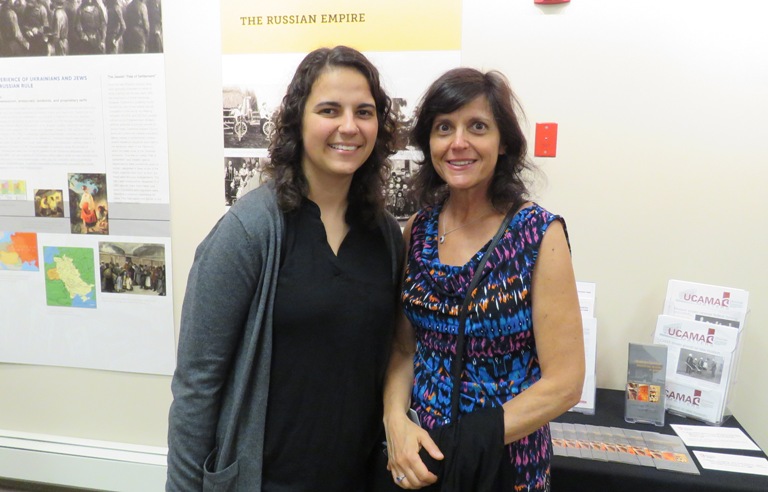 Members of the community at the reception. 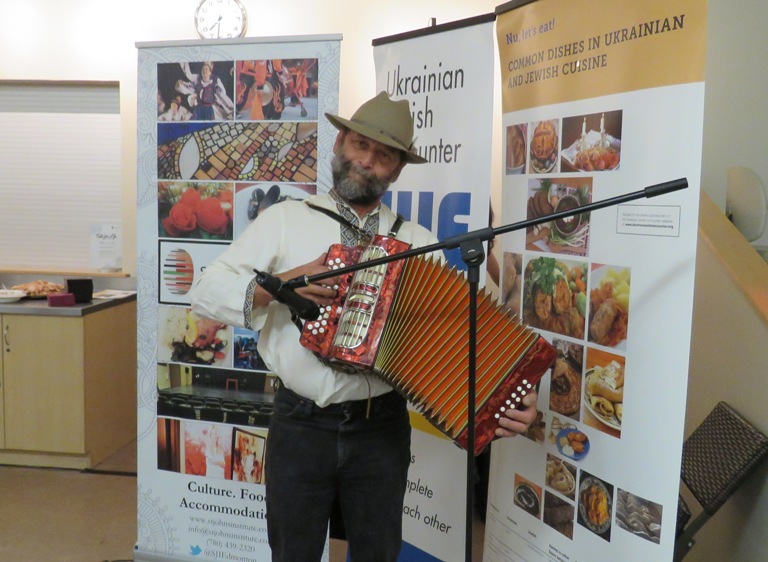 Live music and delicious snacks were on hand to demonstrate the shared culture.

Be the first to comment on "A fresh perspective on exhibit in Edmonton: A Journey through the Ukrainian Jewish Encounter"