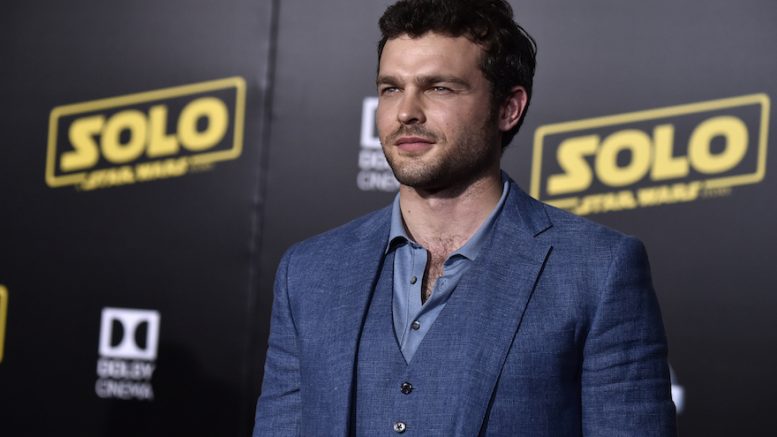 (JTA) — “Star Wars” fans are eagerly awaiting the franchise’s latest film, “Solo: A Star Wars Story.” As its title suggests, the flick focuses on Han Solo, the legendary character made famous by Harrison Ford in the series’ first films from the late ’70s.

The “Solo” movie, which hits theaters on May 25, is the second of what are being called the “Star Wars” anthology films — or offshoots of the main series (which, for now, is made up of three trilogies: the original films, the early 2000s prequels and the more recent sequels — got that?). The first anthology film was “Rogue One,” released in 2016.

“Solo” follows a young version of the intergalactic smuggler on the planet Corellia, and his furry sidekick Chewbacca. The “space western,” as it’s being called, premiered at the Cannes Film Festival this week and has been described as “crackingly enjoyable” and a “winning chapter” in the “Star Wars” canon.

Here are some Jewish facts about the film (and its titular character) you might not have known.

The new Han Solo is a nice Jewish boy from LA

His name is Alden Ehrenreich, and he attended a Reconstructionist synagogue in Los Angeles’ Pacific Palisades neighborhood. Ehrenreich, 28, is not yet a recognizable star, but he has appeared in films such as Woody Allen’s “Blue Jasmine” and the Coen brothers’ “Hail, Caesar!” According to at least one interview, he seems to enjoy the famous Canter’s Jewish deli.

Harrison Ford once delivered one of the strangest lines ever said about Jewish identity: “As a man I’ve always felt Irish, as an actor I’ve always felt Jewish,” he said on “Inside the Actors Studio” in 2000. Ford’s father was Irish, and his maternal grandparents were Jewish emigrants from Belarus. (Ehrenreich referenced Ford’s Jewishness in a recent interview.) We’ll leave it to the reader to interpret the quote.

Fourteen years ago, Ehrenreich made a home movie to show at his friend’s bat mitzvah. Steven Spielberg’s daughter happened to be friends with the bat mitzvah girl, and the director attended the ceremony. Ehrenreich described the movie as a “piece of sh–,” but Spielberg clearly saw something in Ehrenreich’s performance. He invited Ehrenreich to his Dreamworks studio and introduced him to fellow legend Francis Ford Coppola, who would later cast him in multiple films. Ehrenreich’s well-reviewed performance in Coppola’s “Tetro” in 2009 put him on the map.

4 other Jewish actors were considered for the role

After thousands auditioned for the coveted Han Solo role, a final list of around a dozen actors was announced in early 2016. Among the finalists were four different Jewish actors: Logan Lerman (known for roles in “Fury,” alongside Brad Pitt, and “The Perks of Being a Wallflower”), Dave Franco (James Franco’s brother, who’s now a marquee star), Ansel Elgort (star of the action film “Baby Driver,” whose non-Jewish grandmother helped Norwegian Jews escape Nazis) and Emory Cohen (best known for co-starring in “Brooklyn” with Saoirse Ronan).

The script was written by a Jewish father-and-son duo

“Solo” was penned by Lawrence and Jonathan Kasdan. Lawrence co-wrote two of the original “Star Wars” films, “The Empire Strikes Back” and “Return of the Jedi,” and has said this will be the last “Star Wars” movie he works on. He received an award from the Atlanta Jewish Film Festival in 2016. Jonathan, 38, has acted in small roles and doesn’t have a long list of writing credits to his name yet. (Meanwhile, Jonathan’s brother Jake — not involved in “Solo” — has worked on shows such as “New Girl” and “Fresh Off the Boat” and films such as “Sex Tape” and the recent “Jumanji” remake.)