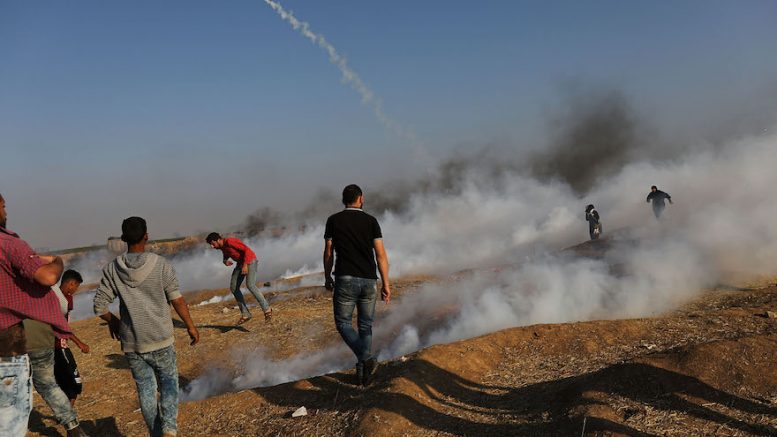 People running from tear gas at the border fence with Israel in Gaza City, May 15, 2018. (Spencer Platt/Getty Images)

NEW YORK (JTA) —  Despite growing condemnation for the deaths of 60 Palestinians on the Gaza border on May 14, Israel defended its military’s actions as an act of self-defense in the face of a mass attack.

“We didn’t want it to happen, but we understood these were Hamas’ intentions,” Dani Dayan, Israel’s consul general in New York, told reporters Tuesday May 15. “We are not going away. We will defend our border. We will defend our population. If they invade Israeli communities, we will have to take much harsher measures. By doing what we did we are saving human life.”

On Monday May 14 in the morning, tens of thousands of Palestinians rushed Gaza’s border with Israel as part of a string of protests called the March of Return. The protesters say they’re opposing Israel’s blockade of the coastal strip, and pushing for Palestinians’ return to their ancestors’ homes within Israel. Israel says the protest is an invasion by Hamas, the militant group that governs Gaza, and that it endangers Israeli lives and communal security.

Israel was pilloried in the press. The optics were particularly bad on Monday: In Jerusalem, an hours’ drive away, American and Israeli diplomats were all smiles as they dedicated the United States Embassy.

The front page of the New York Daily News, a leading tabloid, showed a picture of a grinning Ivanka Trump juxtaposed with a photo of the carnage in Gaza. The headline: Daddy’s Little Ghoul.

The U.N. human rights office condemned Israel for Monday’s “appalling deadly violence.” The European Union’s foreign policy chief, Federica Mogherini, called on Israel to abide by the “principle of proportionality in the use of force” and to “respect the right to peaceful protest.”

But don’t expect Israel to say it’s sorry. Israeli officials say their country did the right thing. And if this happens again, they’d do it again. The same way.

Dayan said the protest was anything but peaceful. The goal, he said, was to invade Israel by breaching the Gaza border fence and pouring into Israeli towns that are just yards from the border. Israeli soldiers, he said, never target unarmed civilians.

He pointed to evidence that some protesters carried improvised bombs and wire cutters, and to video of a Hamas leader saying “we will tear out their hearts from their bodies.”

“It was a mass attack at innumerable points to breach the fence,” Dayan said, comparing the rush at various points to a tsunami and to a soccer riot in Europe, where spectators get trampled by overzealous fans.

“To have a breach of a thousand Palestinians, armed, into the kindergarten of a kibbutz is an imminent danger,” he said. “Those were people who were trying to break the fence, and for that there is zero tolerance.”

Israel says 24 of the 60 people killed were Hamas operatives. Dayan did not have information regarding the other 36 fatalities.

This is not the first time Israel has had to handle a rush on its borders. In May and June of 2011, protesters stormed Israel’s northern borders from Syria and Lebanon. Then as well, dozens were killed when Israel responded with gunfire.

Israelis agree with their government’s stance. Eighty-three percent of Israeli Jews, and 70 percent of Israelis overall, said in April that the Israeli policy of opening fire on the Gaza border was appropriate, according to a poll by the Israel Democracy Institute. Jewish Israelis have also given near-unanimous support to previous Israeli military actions in Gaza.

Dayan blames Hamas for the deaths Monday, saying that the terror group wanted to distract Gazans from their dire economy by shifting blame to Israel. Israel withdrew its army and settlers from Gaza in 2005. After Hamas won Palestinian elections in 2006, Israel and Egypt initiated a blockade of the strip, though they let in humanitarian goods.

Hamas and other Gaza terror groups have continued, on and off, to bombard Israel with missiles in the intervening years. In response, Israel has launched three military operations in Gaza, in 2008, 2012 and 2014.

“Sinwar sends his people and his children and his women to the border to get killed,” Dayan said. “Because the situation in Gaza is extremely difficult, Hamas decided, as many dictatorships do, to direct the blame elsewhere.”

Be the first to comment on "Israel defends Gaza crackdown as self-defense: ‘We are saving human life’"