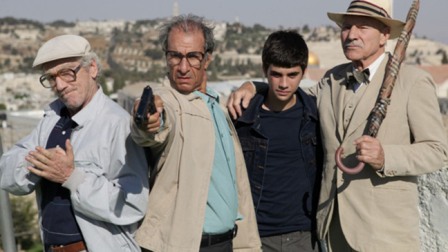 Here is a peek at the feature films that will be screened during Part I of  the upcoming Edmonton Jewish Film Festival, from May 3-5 at the Landmark  Cinema 9, City Centre. For more information and to purchase tickets visit jewishedmonton.org/filmfest or call 780-487-0585.

Click each title to view the movie trailer.  Click here for information and trailers on the films that will be screened May 10-12.

The incredible true story of the brave foreign volunteers who came to Israel during the 1948 War of Independence to help form the fledgling Israeli Air Force.

A group of septuagenarians and a clever youth conspire to rob a bank in act of vengeance for the death of the youth’s father.

Unhappy with her strict religious upbringing, Rebecca secretly opens herself to the secular world. At first her transgressions are relatively minor: she peeks in on Israeli dance classes, and eventually runs away to live on a kibbutz in the desert.

A superlative saga of courage and compassion, Run Boy Run tells the extraordinary true story of a Polish boy who seeks the kindness of others in his solitary struggle to outlast the Nazi occupation and keep alive his Jewish faith.

In this comic drama Ora is in a coma as the result of a car accident. As her children and other family members try to help her regain consciousness the viewer meets plastic surgeons, a wheelchair-bound marathon coach, a tough private investigator, a yoga instructor, a sensitive belly dancer and a big star in the Arab cinema.

Be the first to comment on "2015 Edmonton Jewish Film Festival: Watch the trailers here for Part 1 May 3-5"