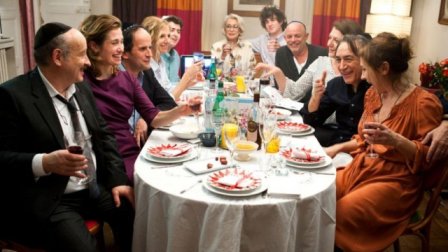 Here is a peek at the feature films that will be screened at the upcoming Edmonton Jewish Film Festival, from May 10-12 at the Landmark  Cinema 9, City Centre. Click on the title of each film to watch the trailer. To watch the trailers for the films being featured from May 3-5 click here.  For more information and to buy tickets visit jewishedmonton.org/filmfest or call 780-487-0585.

The rags to riches story of Sophie Tucker, the iconic jazz singer and comedienne who ruled the worlds of vaudeville, Broadway, radio, television, and Hollywood throughout the 20th century. Before Lady Gaga, Madonna, Bette Midler, Marilyn Monroe, and Mae West, Sophie Tucker was the first woman to infatuate her audiences with a bold, bawdy and brassy style unlike any other. Mining “The Last of the Red Hot Mamas” 400-plus recently rediscovered personal scrapbooks, filmmakers Susan and Lloyd Ecker take us on their seven-year journey retracing Tucker’s sixty-year career in show business.

January 20, 2006: after dinner with his family, Ilan Halimi gets a call from a beautiful girl who had approached him at work and makes plans to meet her for coffee. Ilan didn’t suspect a thing. He was 23 and had his whole life ahead of him. The next time Ilan’s family heard from him was through a cryptic online message from kidnappers demanding ransom in exchange for their son’s life. Based on a book co-written by the victim’s mother, Ruth Halimi, Director Alexandre Arcady’s cinematic adaptation offers a harrowing view into this ordeal: from his kidnapping and torture at the hands of the Gang of Barbarians, to the nearly 700 phone calls, insults, and threats received by his family. Meanwhile the Parisian police fail to recognize the anti-Semitic hatred of his abductors.

This is the story of a 78-year-old Greek man and his Hasidic rapper son, who have been estranged for many years. They embark together on a road trip from Israel to Greece searching for an old magician who saved the father’s life during World War II. The journey leads them to absurd encounters, and ultimately brings them to a final confrontation of father and son.

Take a traditional Jewish funeral whose rituals no one can quite recall. Add a Yiddishkeit community in Paris, one of the most beautiful cities in the world, and top it off with an ensemble cast of dysfunctional siblings and spouses. What you get in the assured hands of director Idit Cébula is the charmingly poignant French film Rue Mandar.

A perky group of fresh-scrubbed young Israelis finds themselves the underdogs in an international singing contest in CUPCAKES, a kitschy musical comedy from celebrated Israeli director Eytan Fox.