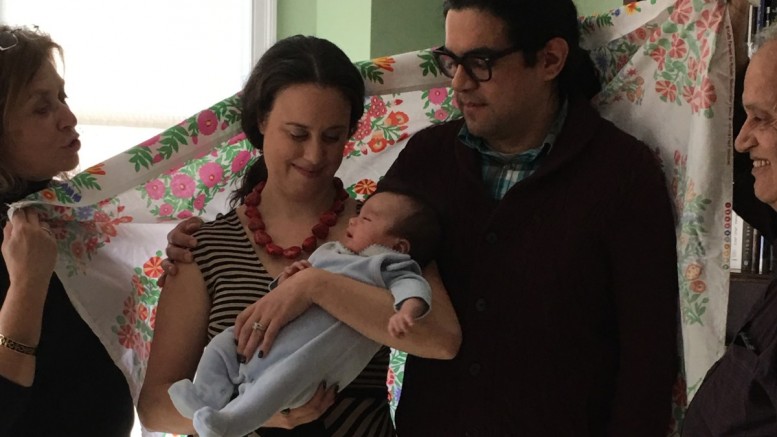 (Kveller via JTA) — He’s not even 3 months old, but already three people have commented on my newborn’s name: “That’s not very Jewish!” And if our experience is anything like the one described by Keren McGinity in her blog post on what counts as a Jewish name, we can look forward to a lifetime of judgment.

As McGinity notes, people make a lot of assumptions about a person’s Jewish identity based on their name. This often comes to the forefront when you’re part of an interfaith family, where names can reflect a variety of identities. My baby’s first name is Emilio, and he has his dad’s last name, which is also “not very Jewish” (unsurprisingly, because my husband isn’t Jewish). Yet I am Jewish, and according to traditional understandings of Jewish identity, the mother passes down religious identity, so my son is also Jewish.

Even so, I don’t believe being a Jewish mother gives my family a free pass: If you choose to raise your child as Jewish, it doesn’t matter which of the parents is Jewish. I believe that behavior trumps bloodline. It shouldn’t be taken as a given that having one Jewish parent, or even two Jewish parents, automatically guarantees you Jewishly engaged children—that takes active commitment on the part of both parents. In our case, I made clear on our third date that should we ever get married and have kids, we would raise them Jewish, not just in name but in practice.

So why does it make me uncomfortable when people comment on my son’s “not so Jewish” name? Maybe I’m already sensitive to judgment of intermarried couples; the notion that intermarriage is a threat to Jewish continuity is still prevalent, though waning. My son’s supposedly non-Jewish name brands him as “other.”

But what makes a Jewish name, really? Haven’t Jews always been a global people, influencing other cultures while absorbing their flavor? While many Jewish names traditionally come from Hebrew, others represent the intermingling of languages in the places where Jews found themselves (and even Hebrew substantially borrowed from other ancient languages!).

Another assumption people tend to make is that Jews are white and predominantly Ashkenazi. Organizations like Jews in All Hues and the Jewish Multiracial Network exist in order to shatter that stereotype. In fact, I’m not totally Ashkenazi, even though I’m quite light-skinned. While my mother is Ashkenazi, my father’s family has both Yemenite and Sephardic lineages, and I am Israeli. My father’s mother spoke Ladino (Judeo-Spanish), and while we searched for baby names, we came across some very “exotic”-sounding Ladino names, many with Spanish influences.

So far, it’s been other Jews who have commented on my son’s “not so Jewish” name. But for the general (white) population, I expect a different issue to emerge. To non-Jews, my son’s name reads not as “non-Jewish” but as Hispanic. In this way he is doubly “othered”: not Jewish enough for the Jewish community, not white enough for everyone else.

What will my son’s experience be like as a minority within a minority? Neither my husband nor I share this distinction with our son. Each of us comes from our own minority community (Jewish for me, Mexican for him), but neither of us is both.

Our son’s name is the surface others will have to look beneath in order to discover the multiple layers of identity hidden there. After all, his middle name, Maor, is Hebrew, but one wouldn’t know that until probing further.

While I worry that Emilio will have trouble being accepted in Jewish communities, I appreciate the fact that people will need to make an effort to change their assumptions about who counts as Jewish. They will have to look below the surface and meet the person behind the name.

Hopefully we will raise our son to wear his Jewish identity proudly, so when people say, “That’s not a Jewish name,” he’ll be able to reply with confidence, “Actually, yes it is.”

(Hila Ratzabi holds an MFA from Sarah Lawrence College and lives in Philadelphia, where she founded the Red Sofa Salon & Poetry Workshop. Her nonfiction and poetry have appeared in numerous venues.)
Kveller is a thriving community of women and parents who convene online to share, celebrate and commiserate their experiences of raising kids through a Jewish lens. Visit Kveller.com.

Be the first to comment on "Yes, My Kid Is Jewish, Even Though His Name Doesn’t Sound Like It"