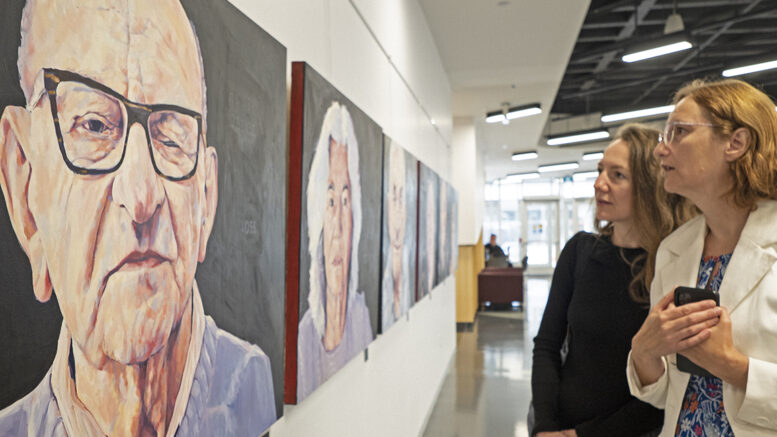 'They didn't know we were seeds' is on exhibit at Stanley Milner Library until November 25. Photo by Tammy Vineberg.

(AJNews) – Saskatchewan-based artist Carol Wylie’s portrait exhibition They Didn’t Know We Were Seeds will be on display at the Stanley A. Milner Library in Edmonton till November 25.

In conjunction with the exhibit, a series of Art and Healing Workshops for survivors and intergenerational survivors, will be held at Stanley Milner Library on November 3 and November 20 from 1 – 3 pm. The workshops will be led by Edmonton Public Library Elder in Residence Nohkom Jo-Ann Saddleback and Jewish Family Services therapist Heather Frayne. Register for these free workshops at jewishedmonton.org.

Artist Carol Wylie describes the origin of the exhibit. “In April of 2016 I attended the Saskatoon Holocaust Memorial service,” explains Wylie. “As survivor Nate Leipciger spoke of his horrifying experiences in a Nazi death camp, and his ongoing efforts to educate and shed light on these atrocities, I was struck anew by the extent of abuse a human being can endure at the hand of another.”

This experience planted the seed, so to speak, for Wylie’s eighteen large scale portraits currently on display in downtown Edmonton.

“Portraiture is the methodology through which I can offer the strongest statement,” adds the artist.

Wylie, who has always been primarily drawn to portraiture as her creative medium, explores the concepts of trauma and understanding through the faces of those with lived experiences of horror. She states that: “Separating families, cutting hair, taking away names and assigning numbers were oppressive methods of dehumanizing and othering.”

One Holocaust survivor who posed for Wylie, Robert Walsman, suggested following a sitting that she contact a friend of his who went through the Residential School System. She began to see how she could silently give voice to the memories of those who had the Canadian Residential School System inflicted upon them in addition to Holocaust victims. “Interestingly, both groups of survivors have connected around strategies of survival and healing.”

Wylie’s original project grew to include more faces, and different stories. She elegantly explains: “A well-done portrait has the potential to be a unique record of the subject’s experience, offering the opportunity for a form of engagement with that person even in their absence. Through portraits of individual survivors, I hoped to create a silent dialogue between Jewish survivors and Indigenous survivors.”

On October 6, a public event was held at the Stanley A. Milner Library to showcase Wylie’s exhibition and give community members an opportunity to hear from the artist herself about the vision and process that went into the three-year project.

“Empathy is understanding the pain and joy of others as equal to our own, leveling us within a shared human experience,” explains Wylie. “This project explores memory, trauma, shared pain, and the strength of the human spirit, as well as an enduring hope that in truly hearing one another’s stories and accepting deep in our bones that we are the same, humanity will someday be characterized more by its compassion than its capacity for cruelty.”

Organized by The Jewish Federation of Edmonton, in collaboration with the Edmonton Public Library, the event was also supported by the Isadore and Florence Burstyn Memorial Fund and the KSW Calgary Holocaust Education and Commemoration Endowment Fund.  One day following Yom Kippur, a sizeable group of Edmontonians from various communities gathered in the EPL’s Muttart Theatre. In addition to hearing from the creator of They Didn’t Know We Were Seeds; audience members were able to listen to the experiences of PhD candidate and Indigenous community leader Terry Cardinal.

Cardinal, joined by her daughters and sister in the audience, shared ideas from her scholarly research with attendees in addition to talking about her ongoing work respectfully searching for unmarked graves at the site of the former Blue Quills Residential School. Cardinal candidly explained that both her father and grandfather had been prisoners of the Canadian residential school system.  Cardinal, who speaks Cree, but admittedly not fluently, also explained what it is like to reclaim her traditional language and cultural identity in the midst of generational trauma.

Wylie and Cardinal then took the stage together for a discussion of the commonalities between their work. Themes of healing and the preservation of truth were at the forefront of the conversation, and both women emphasized the importance of mutual understanding. Having gotten to know eight of her nine Residential School subjects very well, Wylie was careful to try to give these individuals voice without betraying the more intimate pain of those in her paintings. Wylie’s compassion for her subjects clearly comes from a place of gained knowledge and understanding.

Prayers for healing were given by members of the Indigenous and Jewish communities. The emphasis of discussions seemed to be predominantly focused on Canada’s ongoing work for truth and reconciliation in supporting those who went through the Residential School system. Wylie’s work presents the perfect catalyst for larger societal examinations of trauma and healing throughout diverse communities.

A reception followed the formal talks given by Wylie and Cardinal, giving community members a unique opportunity to engage with both speakers.  For those who missed the event, they will still be able to visit Wylie’s impressive exhibition of portraits – nine Holocaust survivors, and nine Residential Schools victims.  Their stories are etched on each of their faces, and visitors will be struck by the sensation that after gazing at each image they have developed a connection with each individual.

“As numbers of Holocaust Survivors dwindle, and in anticipation of the same eventual loss of first-hand accounts from Residential School survivors, these portraits will remain as echoes of individual strength and courage,” concluded Wylie.