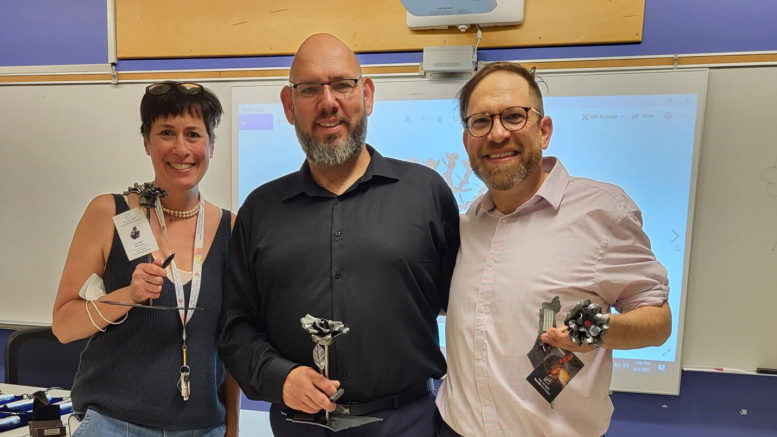 Israeli artist Yaron Bob was in Calgary at CJA on June 1 and Edmonton at Talmud Torah on June 2 hosted by JNF. He described the impetus behind his sculptures - where he creates beautiful art from Kassam Rockets that have been shot by Hamas into Israel. Pictured above Yaron Bob (centre) with TTS executive assistant and Jay Cairns Executive Director of JNF Edmonton.

(AJNews) – Art tells a story. It also has the magical effect of drawing in its audience with shapes, sounds, smells, and textures. When the story an artist tells is one of transforming pain into beauty, you cannot help but be moved by this magic.

Israeli artist, Yaron Bob, is a metal sculptor who does exactly this.

Yaron lives in Moshav Yated, a small Israeli community that borders the Gaza strip and Egypt, and his experiences under the threat of rockets helped guide his current path in life. He is a full-time blacksmith who uses metal from Kassam rockets launched from Hamas that have landed in Israel to create one-of-a-kind, custom, hand-made pieces of art.

Lance Davis, CEO of Jewish National Fund (JNF) Canada met Yaron in Israel when he was touring these periphery communities. “His story of living in a rocket reality and how he has turned darkness to light was something that we really wanted to bring to Canada,” Jay Cairns, Executive Director at JNF Edmonton explained. 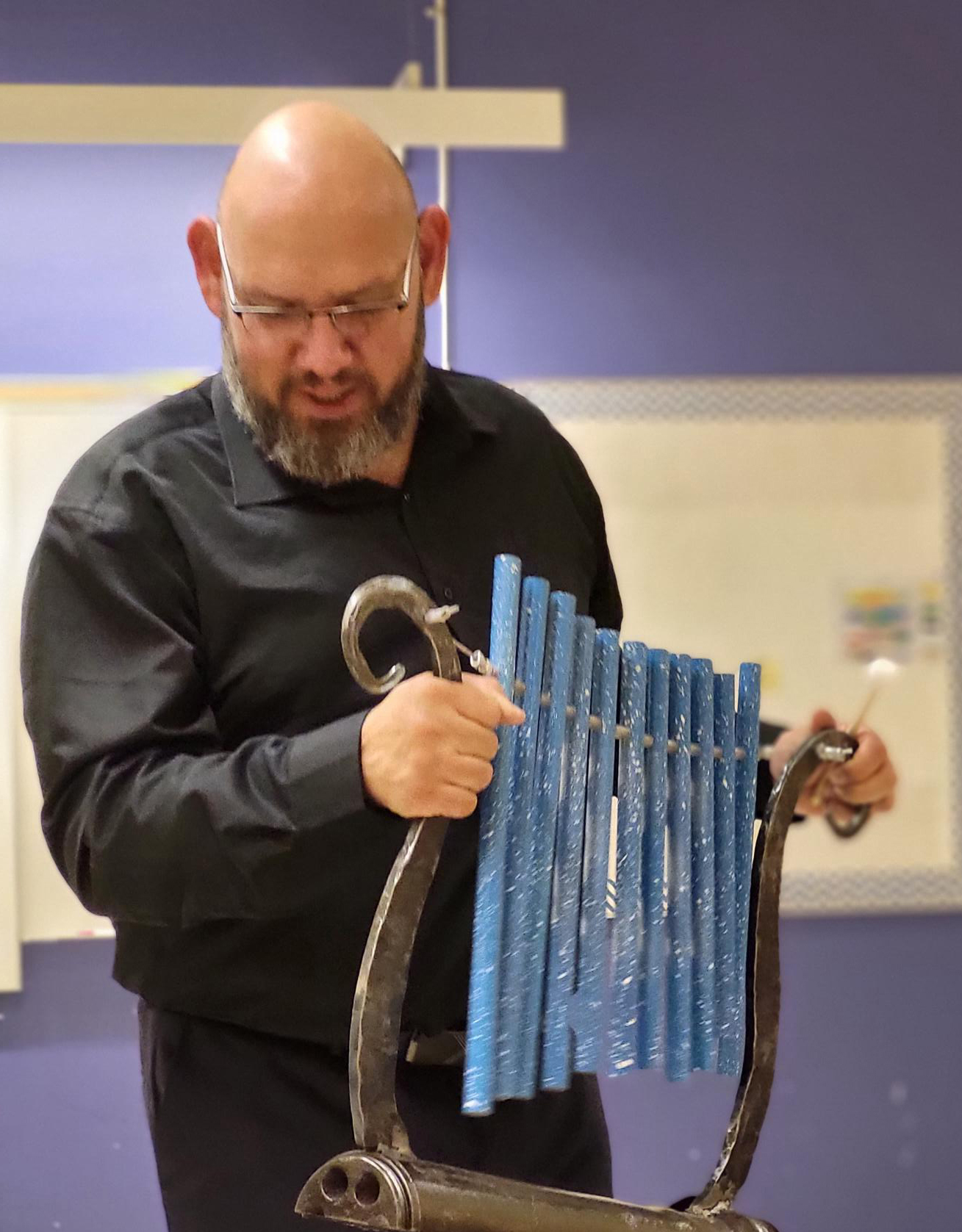 “The Sound of Peace’ fashioned after an ancient Hebrew Lyre, made by Yaron Bob with the remnants of a Kassam Rocket.

JNF Canada supports communities in Israel, such as an animal assisted therapy facility for children and PTSD resilience center in Sderot.

The Calgary Jewish Academy and Edmonton’s Talmud Torah School both welcomed Yaron Bob to speak. Elliott Steinberg, Executive Director at JNF Calgary, lauded the Calgary event at CJA on June 1, saying that “everyone who met Yaron and heard his story was enthralled.”

When Yaron was young, his passion for working with metal came from accidentally sitting on a fork in his back pocket. He began playing with the bent fork, manipulating the metal to create something else entirely. As he described this story, Yaron almost effortlessly took a fork he brought and, after a minute, presented one of the attendees with the fork…only now it had been transformed into the shape of a cat.

“The kids absolutely loved his fork sculptures and magic tricks. Well, the adults really liked those too,” Steinberg commented on the Calgary event. In Yaron’s spare time, he volunteers at hospitals and teaches children to make artwork just like this from forks. In fact, a company that manufactures cutlery created special forks named after Yaron, “Bob’s Forks,” specifically designed for the kids to play with and have fun.

Many years ago, Yaron was teaching at a high school and, on his way to work, the “Code Red” sirens went off which indicated he had roughly 10-12 seconds to find shelter from an incoming rocket. He was only able to take cover behind a wall at that time, and the rocket ended up landing approximately 15 meters from him. He walked away from the incident, alive, shaken, but determined.

“I wanted to take away its power,” Yaron said as he referred to the rocket. When he made his first metal rose out of the Kassam remains, he described it as a “waterfall of cleansing energy from all the anger.” He had transformed darkness into light. This was the beginning of Rockets to Roses which he hopes remains a very limited-edition collection. 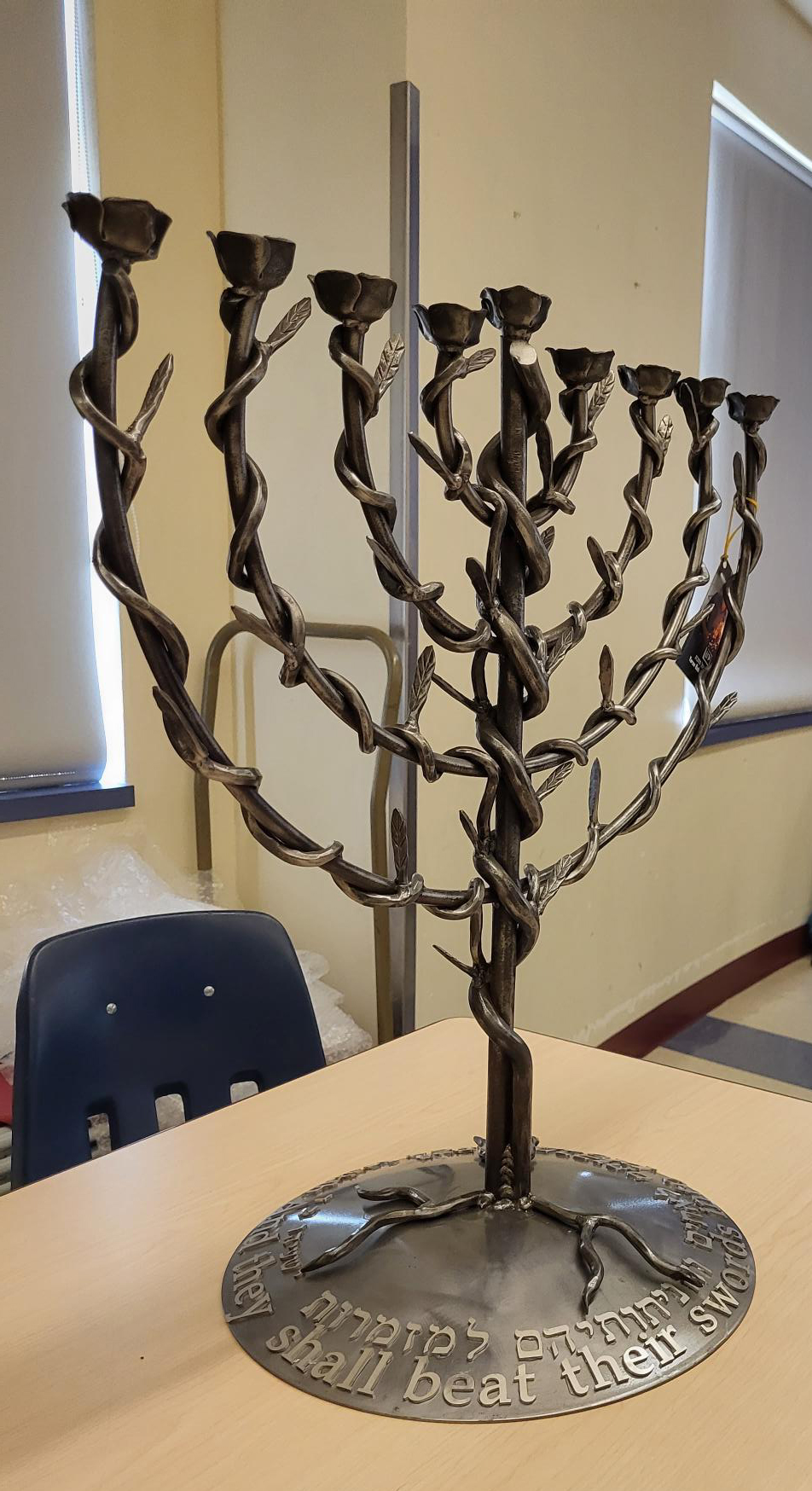 A chanukiah sculpted by Yaron Bob.

A metal map of Israel serves as the base for each rose with the flower secured to the spot that marks Sderot – a place where many rockets have landed. A portion of the proceeds from the metal roses goes towards building above-ground, portable bomb shelters in the city of Ashkelon. Through the organization Operation Lifeshield, the contributions from Rockets to Roses helps fund these crucial shelters to protect citizens of Ashkelon. “I think a big part of Yaron’s message is to take adversity and turn it around into something positive – for your own benefit and for those around you,” Steinberg shared.

Yaron has traveled all over the world to present roses and sculptures to dignitaries, including former United States Secretary of States Hillary Clinton and John Kerry, United Nations Secretary-General Ban Ki-Moon, United States ambassador to the UN Nikki Haley, and many others. In 2014 former President US Barack Obama received a chanukiah sculpted by Yaron with the words “And they shall beat their swords into plowshares” on the base.

In addition to commissioned work for world leaders, Yaron has created menorahs for schools such as a giant menorah constructed from rockets that resides on the front lawn of Hebrew Academy of the Five Towns and Rockaway high school in New York. It was commissioned by a local family after seeing a similar one in Sderot, Israel. Yaron had the opportunity to share his story in 2013 after being invited to speak at a TEDx event in Hong Kong.

Yaron works with the Jewish National Fund, social workers, and resiliency centers around Israel such as No Soldier Left Behind, which is a non-profit organization that treats and escorts PTSD and CSR (combat stress reaction) veteran soldiers in Israel. A recent addition to Yaron’s creations is a sculpture named “The Sound of Peace.” It is designed after the ancient Hebrew lyre, kinnor David. The sculpture was donated to a centre in Ashkelon to help kids overcome their PTSD. Yaron designed the sculpture to perform Israel’s national anthem, Hatikvah. The Lillian and Jack Soroka Fund recently donated a smaller version that Yaron brought to Talmud Torah to be used by students at the school. Music teacher Ben Ragosin is thrilled this piece of art will have a permanent home at TT to be part of the music program.

“The Grade 5/6 students were mesmerized during Yaron’s presentation and the amazing artwork he created,” said Ragosin.

“I know this is what I’m supposed to do,” Yaron articulated. He knows the serious implications living under the threat of rockets has on an individual, and he wants to “change darkness into light, and make the world a better place.”

You can visit www.yaroniron.co.il to learn more about Yaron Bob and how to purchase his art.