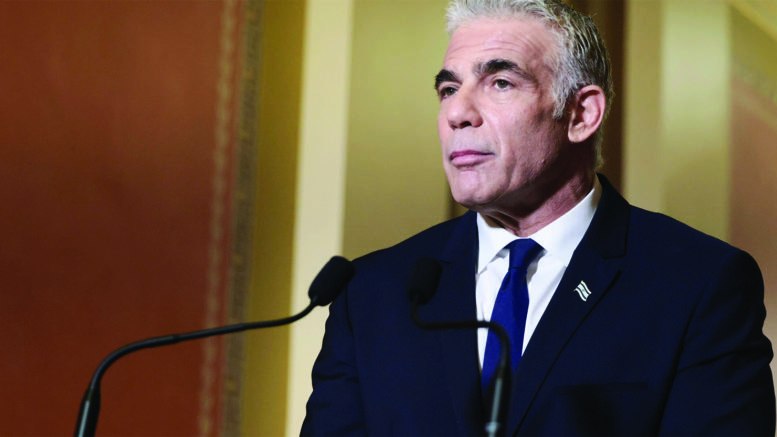 (JTA) — Yair Lapid might only be Israel’s interim prime minister, but he appears to be determined to maximize the position in the four months he is guaranteed to occupy it.

In a speech delivered Saturday night, Lapid laid out a set of beliefs that he said bind Israelis of all ideologies, as well as his diagnosis for why widespread agreement on fundamental ideas hasn’t translated into political harmony.

“The answer is politics,” he said in the speech, published in English by the Times of Israel and in adapted form in Hebrew by Lapid on Twitter.

“In Israel, extremism doesn’t come from the streets to politics. It’s the opposite,” he added. “It flows like lava from politics to the streets. The political sphere has become more and more extreme, violent and vicious, and it is dragging Israeli society along with it. This we must stop. This is our challenge.”

Lapid assumed power on Saturday, days after the Israeli government officially dissolved and weeks after he and his predecessor, Naftali Bennett, announced that they could no longer maintain their coalition. In that announcement, Bennett announced that Lapid, who had been scheduled to cycle into the prime minister role next year, would become the interim prime minister while the country awaits its fifth round of elections in just over three years.

In his speech, Lapid said Israelis agree that their country should be “Jewish, democratic, liberal, strong, advanced and prosperous.” He also said urgent issues including the danger presented by Iran and terrorism within Israel, the country’s “education crisis” — the school year just ended with a disruptive teacher strike — and the high cost of living cannot wait until the country’s political turmoil is resolved.

The leader of Israel’s centrist Yesh Atid party, Lapid also offered a vision for the country’s relations with its Arab citizens and Palestinian neighbors that is different from his two right-wing predecessors, Bennett and Benjamin Netanyahu. (He also thanked Israelis for supporting a smooth transition of power, an apparent jab at Netanyahu, who sought to remain in power through multiple elections and now is seeking to return despite an ongoing corruption trial.)

“We believe that Israel is a Jewish state. Its character is Jewish. Its identity is Jewish. Its relations with its non-Jewish citizens are also Jewish. The book of Leviticus says, ‘But the stranger who dwells with you shall be unto you as one born among you, and thou shalt love him as thyself,’” Lapid said.

He added, “We believe that so long as Israel’s security needs are met, Israel is a country that seeks peace. Israel stretches out its hand to all the peoples of the Middle East, including the Palestinians, and says: The time has come for you to recognize that we’ll never move from here, let’s learn to live together.”

Lapid moved into an apartment on the grounds of the prime minister’s residence in Jerusalem late Saturday, according to a picture that Lapid’s wife, the author Lihi Lapid, posted to Instagram with the caption “A new beginning.” The official residence is under renovation, so he is staying in an apartment previously used to house security forces, in an arrangement that puts him near the symbolic seat of power but not precisely inside it.

Be the first to comment on "In first speech as Israeli prime minister, Yair Lapid calls to stem extremism in politics"