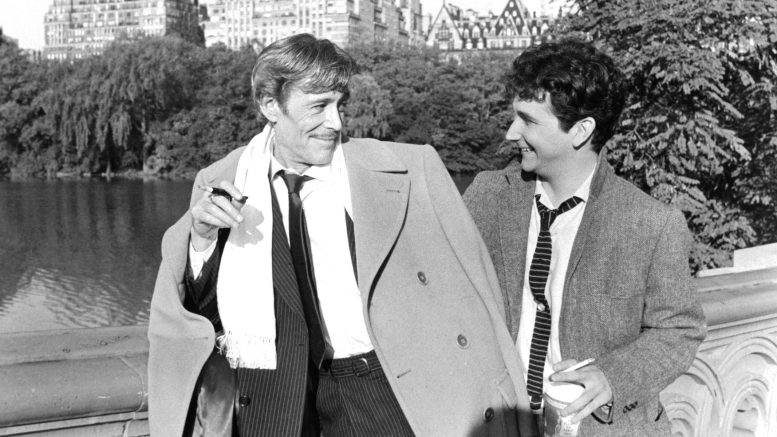 Actors Peter O'Toole as Alan Swann and Mark Linn-Baker as Benjy Stone on set of the MGM/UA Entertainment movie "My Favorite Year" in 1982. (Photo by Michael Ochs Archives/Getty Images)

Social distancing and staying inside is hard. Thankfully, accessing good things to watch during this time is not. This is the 14th installation of a weekly column on Jewish movies and TV shows that you should stream in quarantine.

Family friendly? Yes (Unless you think young ones will be damaged by the word “shtupp”)

(JTA) — With the passing this week of Carl Reiner, we lost one of the comedy greats, Jewish or otherwise. His obituary recalled a show business career that dated to the infancy of television in the 1950s.

Reiner gained success starting in his late 20s as a writer and performer on “Your Show of Shows” and “Caesar’s Hour,” sketch comedies that one might broadly consider precursors to “Saturday Night Live,” sans the politics. Those early programs featured an unparalleled staff of writers, almost all Jewish, that also included Neil Simon, Mel Brooks and Woody Allen.

They provide the backdrop for the 1982 comedy “My Favorite Year,” my choice for your COVID-19 lockdown viewing this week. (With cases on the rise, a reminder to heed what Larry David said in April: Stay home! Watch TV!)

The film is seen through the eyes of a twentysomething Jewish writer named Benjy Stone (nee Steinberg) for a show in the mid-’50s called “Comedy Cavalcade.” Its star is King Kaiser, played by Joe Bologna, a Caesaresque personality: tyrannical and tough, but softhearted. Stone (Mark Linn-Baker) is enthralled that his hero, the dashing actor Alan Swann (Peter O’Toole), will be appearing as the guest star.

Stone and Swann develop a rapport, but Swann has a drinking problem, and in turn a promptness problem. Stone’s more seasoned colleagues on the writing staff want Swann fired, but the youngster stands up for the down-on-his-luck thespian who had provided so many magical moments with his swashbuckling roles. In turn, Swann helps Stone to romance a young assistant on the show’s staff. (Stone at one point offers his wannabe girlfriend lessons on how to tell a joke, Borscht Belt style. It doesn’t go well.)

Through it all, the odd couple experience plenty of craziness, like riding off on a horse together in Central Park following some chaos started by Swann.

The movie has a Jewish ethos, but here’s the most Jewy part: Stone goes to visit his mother, Belle (Lainie Kazan) in Brooklyn, a stereotypical Jewish mom — in a quintessential Jewish setting — except that she’s now married to a former Filipino fighter named Rookie Carroca, who does all the cooking. (He makes parrot for the dinner: “They put up quite a squawk.”)

Other guests at the dinner include more relatives who embarrass Benjy: Uncle Morty (Lou Jacobi, one of my favorite character actors) and his wife, who wears her wedding dress to the function: “You like it? I only wore it once.”

Belle the yenta prods Swann, whom she calls Swanny, about his personal life, and he divulges that he has a young daughter whom he hasn’t seen in ages.

Morty is more pointed in his inquiries: “That paternity suit – did you shtupp her?” he asks. “Did you go all the way?”

They leave the apartment with its throng of residents, all Jewish, trailing behind. One man offers his Italian surname and Swann asks how he got in the building. “I’m the super,” he says.

At showtime, Swann finds out that the broadcast is live and is petrified (“I’m a movie star, not an actor!”), going off to drink away his fears. Stone gets him to return, and the one-time heartthrob makes amends for any difficulties he caused during the week by helping King Kaiser fight off some mobsters on the live show who don’t take kindly to one sketch.

Wonder if “Your Show of Shows” ever had the same dilemma?

Back to Reiner: He would go on to create “The Dick Van Dyke Show,” about a comedy writer named Rob Petrie, that would be one of the most embraced sitcoms not just of the ‘60s but all time. Looking back on it, the Emmy winning show may seem idyllic, especially as it was on the air during the civil rights era.

But Reiner was well aware of what was happening: On one episode, Petrie makes an impassioned plea for brotherhood among all people at a banquet sponsored by a group for interracial understanding.

Carl Reiner left a legacy in so many ways. He will be greatly missed.

Be the first to comment on "With a nod to Carl Reiner, ‘My Favorite Year’ recalls the infancy of TV sketch comedy"