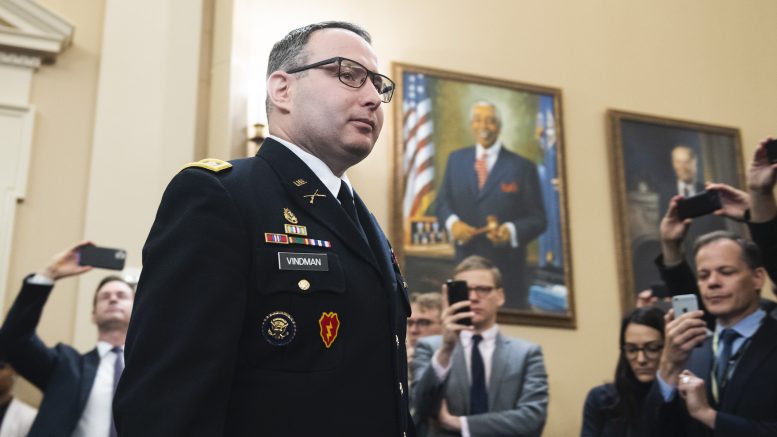 (JTA) — Lt. Col. Alexander Vindman, the Jewish National Security Council staffer who was among the first to raise flags about President Donald Trump’s pressure on Ukraine to investigate a political rival, is retiring from the U.S. Army amid allegations by his attorney that “he was bullied by the President and his proxies.”

Vindman made the announcement in a tweet, which did not mention the allegations.

The news of Vindman’s retirement was first reported by CNN, which cited the claims by the attorney, David Pressman.

Pressman told CNN that Vindman would retire after more than 21 years of military service because he did not feel that he could advance due to political retaliation from the president and his supporters.

“The President of the United States attempted to force LTC Vindman to choose: Between adhering to the law or pleasing a President,” Pressman said in a statement to CNN. “Between honoring his oath or protecting his career. Between protecting his promotion or the promotion of his fellow soldiers.”

In February, Vindman was removed from his position as an expert on U.S. policy in Ukraine at the National Security Council. Vindman’s twin brother, Lt. Col. Yevgeny Vindman, was asked to leave his job as a White House lawyer on the same day.

Both Vindmans, who immigrated with their father from Ukraine in 1979, were reassigned to the Army. Their removal came just days after Trump was acquitted by the Republican majority U.S. Senate in an impeachment trial.

Vindman testified in November before the House Intelligence Committee hearing on Trump’s impeachment about a July 2019 phone call between the president and his Ukrainian counterpart, Volodymyr Zelensky, during which Trump repeatedly pressured Zelensky to launch politically motivated investigations that would help Trump’s 2020 campaign. Vindman was listening in on the call in his official capacity with the National Security Council.

During his testimony, Vindman said that his father, who in the 1970s fled from the former Soviet Union with his Jewish family, “feared that his speaking out would bring retaliation.”

Vindman said at the hearing: “Do not worry, I will be fine for telling the truth.”

In recent weeks, allegations have surfaced that Trump was attempting to prevent Vindman’s upcoming promotion to the rank of colonel, according to CNN.

An unnamed source told CNN that senior Army officials informed Vindman that he would not be allowed to work in his area of expertise, which includes Ukraine.  The source also said that a senior officer joked that he could be sent to “man a radar station in Alaska.”

Be the first to comment on "Alexander Vindman, Jewish NSC staffer who testified at impeachment hearing, retires from military amid allegations of bullying by Trump"