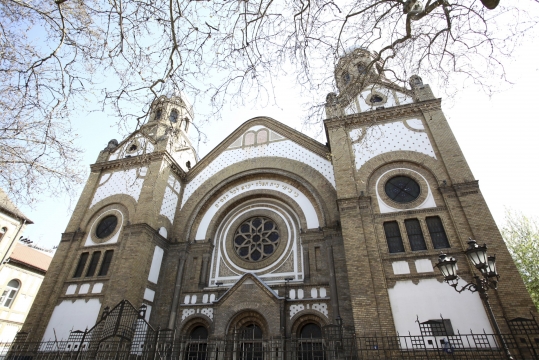 A synagogue exterior. Photo from iStock

(Kveller via JTA) — I’m not sure where to begin. I first want to say that my synagogue — and I think synagogues in general — have done a really great job of welcoming congregants who have converted, are intermarried, and are in gay and lesbian marriages. My synagogue also welcomes adopted children and Jews of color. It is still mainly an Ashkenazi population, but it quickly is becoming more diverse. The rabbi, cantor and board of trustees have worked hard and continue to work to make the synagogue inclusive.

But there is one population that seems to be left out: single parents. I think I speak for most single parents when I say we didn’t marry with the intention of divorcing. Unfortunately, divorce happens for all sorts of reasons, which oftentimes are private and painful. And as welcoming as synagogues have become of non-traditional families, the one thing they have in common is they remain two-parent households. Shira may have two imas, but there are TWO parents in Shira’s house.

Many single parents have fewer financial and emotional resources than married parents and less time to volunteer. And while the divorce papers may have been signed, single parents are often dealing many years later with uncooperative ex-spouses and the shifting landscape of children’s custody.

When I was married, I was a super-volunteer at my synagogue and loved being involved. I knew well the rabbi, cantor and religious school director. When they asked me to take leadership roles in various areas of synagogue life, I was happy to contribute.

Then I divorced. My ex-husband met with the cantor to discuss his feelings about the split, so it clearly wasn’t a secret. Yet for all the time and energy I had generously devoted to the synagogue, no one called or reached out to me. The group that arranges meals and transportation for sick congregants never called to see if I wanted a few meals delivered. I had to apply for reduced dues since my ex-husband was the main breadwinner.

I was already feeling ashamed and embarrassed due to my divorce, and I felt the synagogue, my second home, was ashamed of me and my failed marriage. Instead of lifting me up when I needed the most help, the congregation let me down.

I still feel committed to Judaism and living Jewishly, but I am conflicted about Jewish institutions. I don’t feel like my synagogue has a place for people like me, and I also feel that there is little compassion or understanding for single parents. I don’t need a support group; I need support.

There is an unspoken stigma regarding divorce in the Jewish community. The failure of a marriage implies that something is “wrong”— abuse, addiction, affairs, mental illness. In addition, success in the Jewish world is almost always defined as highly educated, capable of self-support and able to maintain a functioning family. So when my marriage fell apart, it was logical that I felt like a failure.

A phone call from the rabbi or cantor acknowledging the challenges my family and I were facing would have gone a long way in easing my frustration and disillusionment. As it stands now, since I am outside the normative two-parent family, I’m not sure what or where my next steps will be.

(Eliana Salzman is the pen name of a single mom of two teenagers.)

Kveller is a thriving community of women and parents who convene online to share, celebrate and commiserate their experiences of raising kids through a Jewish lens.Visit Kveller.com.