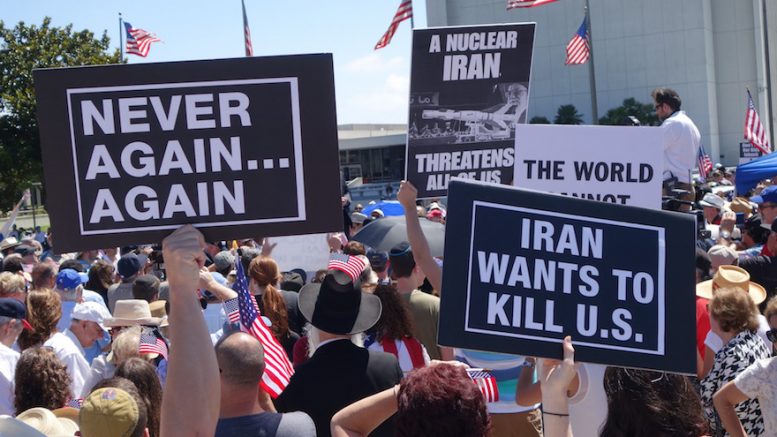 WASHINGTON (JTA) — The Trump and Clinton campaigns issued tough-on-Iran statements in the wake of a report alleging that negotiators allowed Iran secret loopholes in the nuclear agreement.

The Institute for Science and International Affairs, a think tank founded by a former United Nations nuclear weapons inspector, David Albright, said in a report released last week that Iran complied with most of the sanctions relief for the nuclear rollback deal when it was implemented in January.

However, the report also said there were a number of exemptions, citing anonymous sources.

The Obama administration strongly denied the thrust of the report, saying the deal was being implemented according to the letter. Parties to the deal were Iran, the United States, Germany, France, Britain, China and Russia.

The campaign of Donald Trump, the Republican nominee, pounced on September 1, taking a shot at his Democratic rival, Hillary Clinton, who as secretary of state in President Barack Obama’s first term helped set the stage for the deal.

“The deeply flawed nuclear deal Hillary Clinton secretly spearheaded with Iran looks worse and worse by the day,” said a statement by the campaign attributed to Lt. Gen. Michael Flynn, a former director of the Defense Intelligence Agency who is now advising Trump.

“It’s now clear President Obama gave away the store to secure a weak agreement that is full of loopholes, never ultimately blocks Iran from nuclear weapons, emboldens our enemies and funds terrorism,” he said.

Republicans have strongly opposed the deal. A number of candidates during the GOP presidential primaries pledged to trash it, but Trump, while decrying it as a giveaway, has said he would first consult with his national security advisers should he be elected president.

Clinton, in subtle ways, has sought to differentiate herself from the deal’s outcome, praising the agreement while suggesting she would be more vigilant in keeping Iran on track.

In a statement sent to JTA, the Clinton campaign did not address the report co-written by Albright directly, but called for reauthorization of sanctions and sounded a tough note about how she would oversee its implementation.

“Hillary Clinton supports a clean reauthorization of the Iran Sanctions Act and believes Congress should get this done in short order when they return from recess,” said her spokesman, Jesse Lehrich. “And as president, she will also continue to enforce, and strengthen as necessary, sanctions on Iran’s support for terrorism, human rights abuses, and ballistic missile activity.”

The Obama administration says it does not need a reauthorization of sanctions first passed in the 1990s and enhanced over the years to force compliance, but would not oppose a reauthorization. Many of the sanctions – but not all – have been waived as part of the deal.

Democrats in Congress favor a “clean” reauthorization that they say would allow any future president to quickly “snap back” sanctions, while Republicans want to add new provisions to address Iranian misbehavior not addressed by the deal, including backing for terrorism and activities in other countries.

Democrats and Clinton oppose the Republican proposals, saying they are stealth maneuvers to undercut the deal.

“She has always made clear that while the historic deal passed last year represents a crucial step forward toward preventing Iran from obtaining a nuclear weapon, we must proceed with a ‘distrust and verify’ approach,” Lehrich said of Clinton. “Maintaining the infrastructure to immediately snap back sanctions if Iran violates the terms of the deal is essential. Congress should put partisanship aside and send the president a clean ISA reauthorization bill for his signature.”

Citing a single anonymous “senior knowledgeable official,” the report — first covered in the general media by Reuters – said the joint commission administering the deal allowed Iran to keep more than the prescribed amount of low enriched uranium. The joint commission comprises representatives of Iran, the six major powers and the European Union.

Under the deal, Iran is allowed to keep up to 300 kilograms of low enriched uranium, an amount too small to be turned into material sufficient to make a bomb. The report did not say how much uranium above the maximum that Iran was allegedly allowed to keep.

The report also said the joint commission allowed Iran to continue to operate 19 “hot cells,” protected enrichment devices, that were larger than the 6 cubic meters prescribed by the deal, which permits Iran to keep the smaller hot cells to continue plutonium enrichment for medical purposes. The  larger hot cells “can be misused for secret, mostly small-scale plutonium separation,” according to the report, which also noted that Iran was permitted to maintain the larger hot cells with the approval of the joint commission.

According to the report, the joint commission also allowed Iran to export a larger amount of heavy water than agreed upon, although this was previously reported. The “knowledgeable official” source said the exemptions were granted because Iran was not yet in full compliance by implementation day, Jan. 16.

The American Israel Public Affairs Committee said it was “troubled” by Albright’s report.

“If the report is accurate, this unwarranted leniency sets a dangerous precedent concerning adherence to the agreement,” the pro-Israel lobby said in a statement. “No further concessions should be granted to Iran, and complete transparency related to the deal’s implementation must be provided.”

The Obama administration, in its responses, said there were no shortcuts.

Be the first to comment on "Trump, Clinton talk tough on Iran following controversial report"