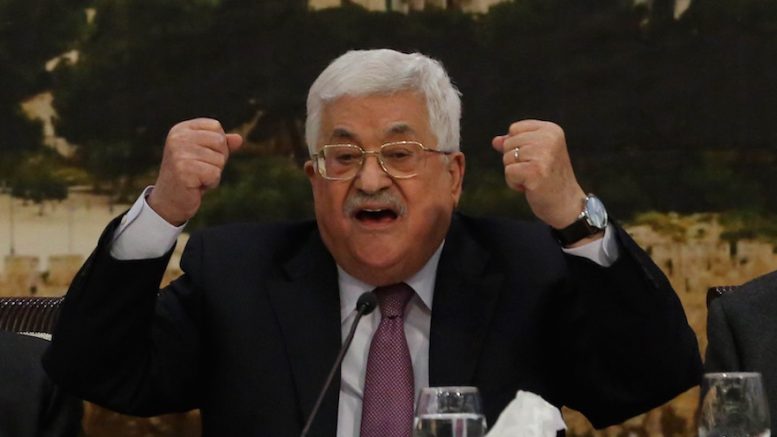 Notably, the United States is silent.

The P.A. president, Mahmoud Abbas, delivered a rambling address of more than two hours this weekend to the Palestine Liberation Organization’s Central Council.

“Today is the day that the Oslo Accords end,” he said. “Israel killed them.”

Abbas blamed the restrictions under which his Palestinian Authority operates and what he regards as Israel’s unrestrained occupation activity.

His remarks drew condemnation across the Israeli and U.S. Jewish spectrum, including from groups that have not hesitated to criticize the Israeli government for recalcitrance in the peace process. The groups and the Israeli government were especially outraged that Abbas rejected Jewish connections to the land of Israel and claiming that Zionism was “a colonial project that has nothing to do with Judaism.”

President Donald Trump, a target of wrath in the Abbas speech, is typically quick to jab back at insults but said nothing. Neither have two others called out in the address: Nikki Haley, the ambassador to the United Nations, nor David Friedman, the ambassador to Israel. Also silent are (characteristically) Jared Kushner, Trump’s son-in-law, who is charged with reviving Israeli-Palestinian talks, and (uncharacteristically) Jason Greenblatt, the Trump administration’s top Middle East negotiator and avid tweeter.

The silence suggests that the Trump administration has not entirely written off the Kushner-led effort to revive Israeli-Palestinian talks. Greenblatt was headed to Israel this week and would remain through Vice President Mike Pence’s visit next week. A spokesman for Kushner and Greenblatt did not return a JTA request for comment on the Abbas remarks.

So what did Abbas say and what did he do? How is Israel responding? And is the peace process dead?

In addition to discounting the legitimacy of a Jewish state in the region, Abbas counted out a role for the Trump administration in restarting the talks.

Abbas is furious with Trump for his recognition last month of Jerusalem as Israel’s capital and for his threats to cut funding to the Palestinian Authority. (On Tuesday, the Trump administration froze more than half of its funding for the United Nations agency that administers aid to Palestinian refugees and their descendants, but a spokeswoman said it was because Trump wants other countries to increase their assistance to UNRWA, not to punish Abbas.)

What does Abbas’ speech mean?

Not a lot. Abbas has not been this blunt about declaring Oslo dead, nor has he been as adamant about decentralizing the traditional U.S. role as mediator. But none of this is new: When the peace process is on the skids, Abbas has reflexively blamed its structure, which he says favors Israeli settlement expansion and Palestinian disempowerment, and called for a diminished U.S. role.

“It is impossible, and I repeat – it is impossible – to return to the cycle of negotiations that failed to deal with the substance of the matter and the fundamental question,” he told the U.N. General Assembly in September 2014 following the collapse earlier in the year of the Obama administration-led peace talks and the Gaza War that ensued in the summer of the same year. He also called for a greater U.N. role in peacemaking.

Abbas subsequently retreated from that posture, embracing renewed talks under the Trump administration. Notably the PLO has not taken substantive steps to end the peace process. (A subsequent vote by the Central Council recommending an end to recognition of Israel was nonbinding and symbolic.)

So why is this speech attracting so much attention?

Abbas resurrected just about every anti-Jewish trope in the Palestinian nationalist playbook: that there was no Jewish connection to Israel, that Zionism was a European colonialist plot, that Jews preferred Hitler’s Europe to the renascent Zionist project in Palestine, even that Israel is drugging Palestinian youths.

“We condemn unequivocally President Abbas’ recent statements rejecting the Jewish people’s connections with Israel, denying the legitimacy of a Jewish State of Israel, and promulgating conspiracy theories about the creation of the State of Israel,” the Reform movement said in a statement. “Such statements and actions undercut possibilities for a peace process that alone holds the path to a viable and independent Palestinian state.”

J Street, the liberal Jewish Middle East policy group that in recent months has focused its criticism on the Israeli and U.S. governments, called the speech “unacceptable.” Abbas’ frustration, the group said, was “no excuse for calling into question either the Jewish connection to, or Palestinian recognition of, the state of Israel – or for language and proposals that are justifiably earning widespread condemnation.”

But like his declarations of the death of the peace process, none of Abbas’ gibes were new. They have cropped up repeatedly in Palestinian propaganda, especially after negotiations go south. Following the collapse of the 2000 Camp David talks, the late Palestinian leader Yasser Arafat stepped up his claims that Israelis falsified archaeological evidence of a Jewish past in the land of Israel. Arafat’s wife, Suha, was infamous for her spurious allegation that Israel was somehow poisoning Palestinian youths.

What stood out in Abbas’ speech was how he compiled a single golden oldies collection of anti-Jewish myths and fabrications.

“What we heard yesterday from Mahmoud Abbas was terrible,” Israeli President Reuven Rivlin told a delegation of the American Israel Public Affairs Committee. “He returned back to the ideas he expressed decades ago, when they were no less terrible. To say Israel is the result of a Western conspiracy to settle Jews in land belonging to Arab populations? To say that the Jewish people has no connection with the land of Israel? He forgot many things, and said exactly the things that led him to be accused years ago of anti-Semitism and Holocaust denial.”

How is Israel’s government reacting?

Prime Minister Benjamin Netanyahu condemned Abbas’ comments — but has not proposed any changes in Israeli policy nor any departure from the Kushner peace initiative. Netanyahu’s reaction, notably, was jammed into a video postcard greeting from India, where he otherwise extolled the virtues of touring that country.

“He has revealed the truth,” Netanyahu said of Abbas. “He has torn off the mask and shown to the public the simple truth that I have been working to instill for many long years: The root of the conflict between us and the Palestinians is their steadfast refusal to recognize the Jewish state in any borders whatsoever.”

How is the United States reacting?

Abbas said of Trump, “May your house be demolished.” It’s not clear whether he was referring to the White House, Trump Tower or wishing for an end to the Trump dynasty. In any case, Trump and his spokesmen seemed unfazed.

“Clearly emotions are running high in the region and we certainly accept that,” said Heather Nauert, the State Department spokeswoman. “I’d like to caution folks in the region and particularly Mr. Abbas that some of those things [he said] would be considered inflammatory and inciteful and divisive. We would like to see a peace process go forward.”

Indeed, Greenblatt’s first stop when he gets to Israel will be to meet with representatives of the Quartet, the grouping of the United States, Russia, the European Union and the United Nations that guides the peace process.

“Jason will be attending a regular meeting of the Quartet envoys to exchange information and continue our engagement on advancing peace,” a senior White House official told JTA.

Be the first to comment on "Will Abbas’ explosive comments kill the peace process?"