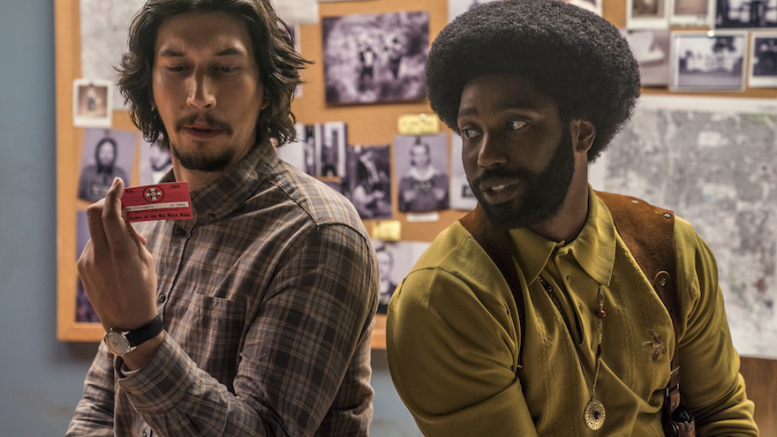 Spoilers for “BlacKkKlansman” below.

NEW YORK (JTA) — In 1965, two young Jewish men, Andrew Goodman and Michael Schwerner, were murdered along with black activist James Chaney by Ku Klux Klansmen in a Southern horror memorialized in the 1988 film “Mississippi Burning.” My own Jew-adjacent summer camp showed the film to us when we were about 12, with a non-Jewish camp director adding in an impassioned speech that while the days of the violent Klan had passed, it was our responsibility, as well-meaning white people, to eradicate casual racism.

Spike Lee’s “BlacKkKlansman” initially shares his well-meaning optimism before dashing it in favor of a grimmer reality. The film, in which two cops — a black and a Jew — go undercover to infiltrate the Klan, is based on a true story whose racial hijinks may remind viewers of Dave Chappelle’s famous “black white supremacist” skit.

Alec Baldwin opens “BlacKkKlansman,” set in 1972, with a surprise cameo as a white supremacist filming an infomercial. Dressed like a B-list Colonel Sanders, he repeatedly fumbles his condemnations of blacks and the “Jewish justices of the Supreme Court.” Lulling the viewer – perhaps only the naive white viewer – into a false state of comfort, Lee’s opening implies that organized white supremacy, as embodied by Baldwin’s character, is an antiquity of our American past to be laughed at rather than a contemporary movement to be feared.

The first hour or so of the film, chock full of racial quips and legitimately funny moments, continues the purposeful misconception. Lee portrays white supremacists as sloppy and ignorant. It is only when Klan Grand Wizard and “National Director” David Duke (Topher Grace) arrives in Colorado Springs that the proverbial comedic hood comes off of “BlacKkKlansman,” revealing a bleaker plot indicative of a disquieting reality.

The film, as Jewish writer David Klion put it, is “surprisingly fun for a while and then not fun at all.”

“BlacKkKlansman” becomes not fun at all when Duke, speaking at a private KKK banquet, embarks on a campaign speech of sorts, telling his followers exactly what they want to hear about blacks, Jews and the like. The Klansmen and their wives and girlfriends soon watch, enthusiastically, D.W. Griffith’s “The Birth of a Nation,” the 1915 film that Richard Brody of The New Yorker calls a “racist fabrication which had the immediate practical result of reinvigorating the Klan nationwide.”

Lee intercuts the banquet scene with a visit to the Colorado College Black Student Union from a man named Mr. Turner (Harry Belafonte), who tells, in agonizing detail, the story of a lynching of his friend, Jesse Washington, noting that he hid in the attic to avoid being found while locals sold Washington’s body parts and celebrated his murder in postcards. (The lynching, which took place in Waco, Texas, is a true story).

Ron Stallworth (John David Washington), the black cop ironically assigned to protect Duke against death threats, is, like Mr. Turner once was, hiding in an attic of sorts at the banquet – in a raised space, behind a small window, watching the disturbing scene unfold. It’s difficult to imagine any Hebrew school graduate watching the scene without thinking briefly of Anne Frank and her own temporary attic refuge from white supremacy.

As the film grew darker, its references to President Donald Trump drew fewer laughs and more collective despondency from the sold-out theater where I saw the film. Anachronistic cries of “America first” and “Make America Great Again” mark nearly every Klan gathering, while every Klan space is plastered with Richard Nixon campaign paraphernalia.

In the most obvious allusion to Trump, Stallworth’s white sergeant (Ken Garito) suggests that Duke’s attempts to mainstream white supremacy could eventually result in an American president who, through immigration, affirmative action and tax reform, will embody Klan values but make them palatable to the American public.

“Politics,” Sergeant Trapp notes, is another way “to sell hate.”

Lee wants to shatter this naivete.

“People become delusional and think they’re not black anymore because they are accepted — it’s the okey-doke,” Lee told Time magazine. “You can say that now, but they still think you’s a nigger.”

Just as even the most naive viewer recognizes that America’s racist past is not separate from but directly tied to its present and future, so does the Jewish cop, Flip Zimmerman (Adam Driver). Earlier in the film, Zimmerman refuses to admit to Stallworth that he has “skin in the game.” Later he realizes that no matter what he does or how culturally accepted he may be, to the Klan he’s still a Jew – still a “kike.”

“I never thought about it before,” Zimmerman confesses to Stallworth, reflecting on the fact that he was not raised particularly Jewish. After spending time with the Klan, who repeatedly reference yarmulkes and circumcision, even casually asking if a situation is “kosher,” he now admits “I’m thinking about it all the time.”

As indicated by anti-Semitism’s central place in the Unite the Right rally in Charlottesville and the movements behind it, contemporary Klan types haven’t forgotten about American Jews.

In the closing moments of “BlacKkKlansman,” Stallworth and his love interest’s collective cozy contemplations of their future are interrupted by a Klan cross burning nearby. Moments later, viewers’ contemplation of America’s future is interrupted with disturbing real-life footage from the Charlottesville rally, complete with participants’ chants of “Jews will not replace us” and cutaways to Trump equivocating on the white supremacist violence. Eventually Lee provides a memorial to Heather Heyer, killed by a white supremacist who drove his car into a crowd of counterprotesters.

Lee ends the film by filling the screen with an upside-down American flag – a signal of distress. It’s an unmistakable comment: Everything in America is not OK, not only for blacks but also for Jews and countless others. It is perhaps a surprising gesture of solidarity with Jews from a director whose past portrayals of Jews were criticized as stereotypical and unflattering.

Nevertheless, “BlacKkKlansman” is an alarm clock, telling Jews — who still need police protection at their places of worship – to wake up.

The line is a paraphrase of Hillel the Elder.